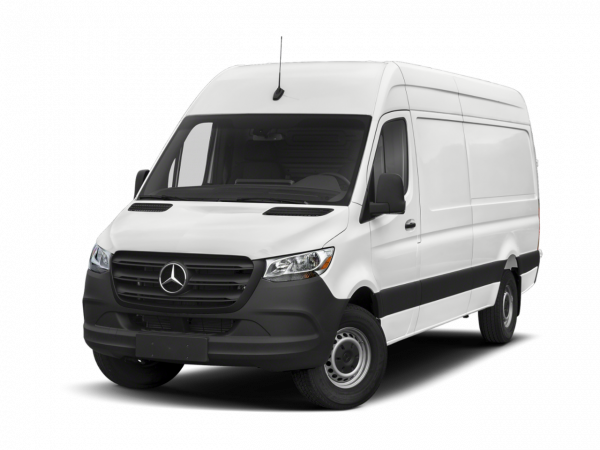 On the surface, a commercial-use Mercedes-Benz van seems like a reckless extravagance. But that's only among folks unaware that Mercedes trucks and vans are sought-after workhorses on European highways, moving goods and hauling freight while its passenger cars ferry the business class. And compared to full-size American competitors, the Mercedes-Benz Sprinter actually offers a number of unique design attributes.

For one thing, it's tall. Its load floor is among the lowest for a full-size van, and with the taller of two available roofs, someone 6-foot-3 can walk around upright inside. And in its largest configuration, the Sprinter offers massive storage capacity of 547 cubic feet. In people mover form, the Sprinter can carry up to 15 passengers in five rows in its longest guise.

Yet despite its long and wobbly stance, the Mercedes-Benz Sprinter actually feels pretty maneuverable around town thanks to a modern chassis design that feels a lot less trucklike than cargo and passenger vans from Detroit. Its standard turbodiesel V6 also offers better fuel economy than domestic V8s. Horsepower and acceleration, however, are best discussed in relative terms. Despite its name, the Sprinter is better suited to urban and suburban environments rather than the highway.

Current Mercedes-Benz Sprinter
The Mercedes-Benz Sprinter is a full-size van, available in Cargo, Crew or Passenger configurations. Cargo vans offer two front seats only, while the Crew is essentially a Cargo van with a second-row bench seat. The Passenger van features four rows and can carry 12 passengers. The larger MiniBus model adds a fifth row for a total of 15 passengers.

All models are offered in 2500 styles with two wheelbase lengths (144 and 170 inches). The Cargo is also available as a 3500 model, offering increased payload capacity. Standard features on most Sprinters include 16-inch wheels, a wood cargo floor, 270-degree-opening rear doors, air-conditioning, a tilt-and-telescoping steering wheel and a two-speaker radio. Stability and traction control come standard, as do front airbags.

You won't find wood trim, leather or actively bolstered seats in this Mercedes-Benz. And because the Sprinter is built for large families and commercial use, you also won't find power liftgates, "magic" seats, innumerable cupholders and other trappings of the modern family minivan or SUV. Instead you'll find notably better build quality and a more modern interior environment than in other full-size vans. The Sprinter's dash and control layout, for example, makes it feel more like a midsize SUV than its utility purpose suggests.

For more on the preceding Sprinter model sold by Dodge, read our Dodge Sprinter review.

Showing 1 through 10 of 30.00
Mercedes-Benz Sprinter Reviews By Year: