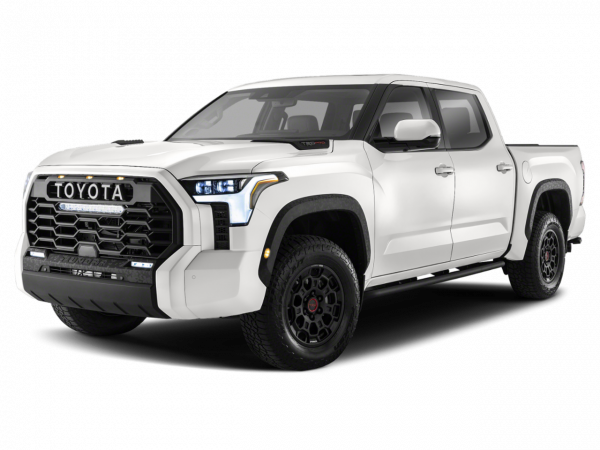 When it originally debuted near the start of the new millennium, the Toyota Tundra was considered by many people to be the first import full-size pickup truck to truly go head-to-head against the trucks from domestic brands. In the Tundra's favor were a refined V8 engine and Toyota's reputation for reliability and durability. This Tundra, however, ultimately found more of an audience with recreational pickup buyers than with hard-core users.

Second-generation Tundras, however, are significantly bigger and more capable. As an American-built truck with true full-size proportions, the second-generation Tundra features three cab sizes, three bed lengths and a choice of three engines. In pretty much every measure, the Toyota Tundra stands equal to competing 1500-series pickups.

Current Toyota Tundra
The full-size Toyota Tundra comes in regular cab, Double Cab and CrewMax body styles as well as base and Limited trims. The Double Cab is essentially a large extended cab with four forward-hinged doors, while the CrewMax is an extra-large crew cab. Available bed lengths for the regular cab and Double Cabs include both a 6.5-foot and an 8-foot bed, while the CrewMax comes with only a 5.5-foot bed.

Some Regular Cabs and Double Cabs have as their standard engine a 4.0-liter V6 rated at 270 horsepower and 278 pound-feet of torque. Other Tundras receive a 4.6-liter V8 putting out 310 horses and 327 lb-ft of torque. The big engine option is a 5.7-liter V8 cranking out 381 hp and 401 lb-ft. The V6 gets a five-speed automatic transmission, while the V8s are hooked to six-speed automatics. All versions are offered with rear-wheel drive or four-wheel drive.

In addition to its strong V8s, the Toyota Tundra stands out thanks to its passenger-friendly cabins. The extended Double Cab features traditional front-hinged doors, making day-to-day usability easier than Chevy and Ford trucks with the more traditional reverse-opening access doors. The Tundra CrewMax, meanwhile, is truly enormous, featuring excellent legroom and a rear seat that not only slides but reclines as well. Feature highlights include a standard rearview camera and available smartphone integration.

There are some downsides, however, including a sometimes jiggly ride quality, below-average fuel economy and driving characteristics than can make it feel bigger than it really is. But the latest Tundra continues to be one tough truck that certainly meets the needs of today's buyers.

Used Toyota Tundra Models
The current Toyota Tundra represents the second generation, which debuted for the 2007 model year. There have been a few changes to note if you're looking for a used Tundra. Models from 2007-'09 with the midsize V8 had a 4.7-liter V8 good for 271 hp. The 4.6-liter V8 with 310 hp arrived for 2010. That year also brought a couple new trim levels, as well as minor cosmetic tweaks and the addition of front-seat knee airbags. Also, prior to 2011 the V6 was less powerful (it made 236 hp). These Tundras also lack the 2014 model's updated interior and exterior styling, standard-across-the-board rearview camera and some available high-tech features, such as smartphone integration and blind-spot monitoring.

The previous-generation full-size Toyota Tundra replaced the unloved T100 pickup when it debuted for 2000. Production ran through the 2006 model year. Although it was available with an optional V8 and several configurations, it wasn't large or tough enough to compete with its more traditional rivals when it came time for serious work-site tasks.

Originally, the Tundra was available in regular and extended-cab versions. Regular-cab versions came only in long bed form, while the extended-cab models (Access Cab) came only with the short bed. The latter did include two rearward-opening doors for easier rear-seat access, but the backseat was cramped for a full-size pickup truck.

There were three trim levels: a sparsely equipped base trim, the midlevel SR5 and the top-line Limited. The base trim was available on two-wheel-drive regular cabs only. A 3.4-liter V6, making 190 hp and 220 lb-ft of torque, was standard on regular-cab Tundras and could be mated to either a four-speed automatic or a five-speed manual transmission.

Topping the lineup was an available 4.7-liter V8 engine. This smooth-revving power plant made 245 hp and 315 lb-ft of torque and was available with a four-speed automatic transmission only.

Only detail changes carried through to 2003, at which point Toyota expanded the Tundra's lineup to include an available sporty new StepSide cargo bed for V8-powered Access Cabs. All Tundras received freshened front-end styling that year, as well as standard antilock brakes and an upgraded center console. A power sliding rear window was also added to Limited models.

The big news for 2004 was the arrival of the Double Cab, a crew-cab version of the Tundra. Riding on an extended wheelbase and featuring a roomier cabin and a cargo bed equal in length to the Access Cab's, the Double Cab added some much-needed variety to the Tundra's lineup, providing a viable option for family-minded truck buyers.

Prospective used Toyota Tundra buyers who plan on doing a lot of hauling or towing should probably focus on 2005 or newer models, as Toyota enhanced the powertrains that year. A new 245-hp, 4.0-liter V6 coupled with either a six-speed manual or optional five-speed automatic transmission became standard, and the available 4.7-liter V8 was now good for 282 horses and used the new five-speed automatic exclusively.

In reviews of the time, we commented favorably about the Toyota Tundra's smooth and refined V8, easy maneuverability in urban areas and roomy Double Cab configuration. Downsides included a lack of brawn for serious towing and hauling, uncomfortable front seats, a cramped rear seat in Access Cab models and chintzy interior trimmings.