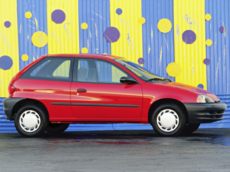 Originally designed as a city car for Japanese and European markets, the subcompact Suzuki Swift occupied the bargain end of the economy car class during its 13-year run in the U.S. Although Suzuki sold a sedan version for a few years, most consumers will remember the more popular Swift hatchback offered continuously from 1989-2001.

With a price tag well under $10,000 and fuel economy ratings around 40 mpg, the Suzuki Swift was a brutally practical option for buyers needing basic transportation. Its very small size and 16-foot turning radius made it a cinch to maneuver in tight spaces. And to its credit, the Swift provided adequate acceleration, at least when equipped with a manual transmission.

In most other respects, though, the Swift wasn't well suited to American driving habits. A noisy highway ride, low handling limits and a total lack of amenities, including power steering, were its main faults. And with a curb weight under 1 ton, the odds were rarely in the Suzuki's favor in the event of a collision. Mechanical reliability proved to be a strong point, but the Swift's low-end interior bits and body panels weren't especially durable.

Due to high depreciation, Suzuki Swifts can be extremely inexpensive to buy on the used market. Unless you're in dire need of an urban runabout at a rock-bottom price, though, you'd be wise to look at a larger, more refined, better-equipped car from one of the major Japanese or Korean automakers.

Suzuki sold the Swift subcompact in two generations, the more recent of these stretching from 1995-2001. This Swift was offered only as a hatchback, motivated by a 1.3-liter four-cylinder engine rated at 70 horsepower and 74 pound-feet of torque. In 1998, Suzuki swapped in a 16-valve version of this engine, resulting in 9 extra hp (for 79 total) and a smidge more torque.

A standard five-speed manual transmission drove the front wheels, and a three-speed automatic was available as an option. The latter was best avoided, as it compromised the small hatchback's stamina and significantly reduced gas mileage.

For most of the model cycle, the Suzuki Swift came in a single base trim level. Standard equipment included skinny 13-inch tires, daytime running lights, dual front airbags, cloth upholstery and three-point seatbelts for all outboard occupants (with a lap belt only in the rear center position).

ABS was the lone factory option, but Suzuki discontinued it after the '98 model year. Air-conditioning and a stereo could be added as dealer accessories. In 2000 and 2001, Suzuki created GA and GL trim levels. The GA was equipped like the base Swift of previous years, while the GL had the A/C and cassette deck as standard.

The earlier generation of the Suzuki Swift was sold from 1989-'94. Equipment was similar to that of later Swifts, but in addition to offering a sedan body style from 1990-'94, Suzuki created a junior econosport called the Swift GT (GTi in '89 only).

The GT hatchback had a higher-compression, twincam version of the 1.3-liter engine that made 100 hp, along with larger 14-inch wheels, a sport-tuned suspension, four-wheel disc brakes, a rear spoiler and sport seats. It was still more of a warm hatch than a hot hatch, but compared to other Swifts, which had the 70-hp engine and wimpy 13s, the GT was reasonably fun to drive. A five-speed manual gearbox was the only transmission available on the Swift GT; other models could be equipped with an optional three-speed automatic.

For most of this generation, the Swift lineup consisted of a base GA hatchback and sedan, a better-equipped GS sedan and the sporty GT hatch. During the 1989 and '90 model years, Suzuki also offered midrange GL versions of both the hatchback and sedan, along with a GLX hatch that had some of the GT's cosmetic add-ons but not its upgraded engine and running gear.

In standard GA guise, the Swift offered very few features -- cloth upholstery was the only amenity of note. The GL models added tinted glass, power mirrors, intermittent wipers and a rear defroster. On top of those items, the GS sedan had an AM/FM stereo with a cassette deck. Air-conditioning was available as an accessory.

Following a mild refresh in 1992, the Swift GS added a center console, a tachometer and a clock. Curiously, GS sedans and GT hatchbacks from '92 and later also had power steering -- a convenience that didn't carry over to the subsequent generation.

One thing to keep in mind if you run across a Suzuki Swift from this era is the minimal safety content. There were no front airbags, and ABS was not an option.