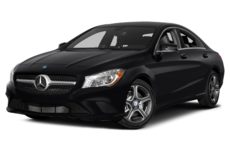 You've probably heard the expression "You've got to start somewhere." Well, for car buyers lusting after something with a three-pointed star on the grille that still has an affordable price tag, that somewhere could very well be the compact Mercedes-Benz CLA-Class sedan.

On the basis of styling alone, the CLA-Class doesn't look entry-level: Its sleek "four-door coupe" silhouette is reminiscent of Mercedes' significantly more expensive CLS model. The CLA certainly feels like the real thing from the cockpit, too, as the automaker has fitted it with premium materials and a suite of the latest safety and multimedia features.

There are some downsides, most notably the rear seat's lack of headroom and a base engine that gets noisy when pushed hard. In the final measure, though, the CLA250's attractive price tag should win out, simply because it puts the dream of driving a Mercedes-Benz within reach of more people than ever before.

For power, the CLA250 is fitted with a turbocharged 2.0-liter four-cylinder engine that produces 208 horsepower and 258 pound-feet of torque. A seven-speed automated-manual transmission sends that power to either the front wheels or all four wheels in the available all-wheel-drive 4Matic model. The CLA45 AMG gets a modified version of this same engine that puts out an impressive 355 hp and 332 lb-ft of torque, along with a quicker-shifting version of the seven-speed transmission. All-wheel drive is standard for the AMG model.

Inside, the front seats offer good comfort and support, but the car's sloping rear roof line reduces headroom to the point that it's not very welcoming to full-size adults. In spite of its comparatively reasonable MSRP, the Mercedes-Benz CLA-Class still feels plenty upscale. Optioned out with the latest technology and high-quality leather and wood trim, the interior lives up to what most buyers will expect in a Mercedes.

In reviews, we've found that the Mercedes-Benz CLA-Class delivers sharp handling and a ride quality that's firm without being harsh. Acceleration from the base 2.0-liter engine is respectable, but the engine gets noisy when pushed hard and this unfortunately serves as a reminder that you're driving the entry-level Benz. The automated-manual transmission shifts quickly and smoothly, however, and offers three different preprogrammed shift patterns. As you'd expect, the CLA45 AMG takes everything up several notches with its gutsy 355-hp engine.

Showing 1 through 10 of 23.00
Mercedes-Benz CLA-Class Reviews By Year: