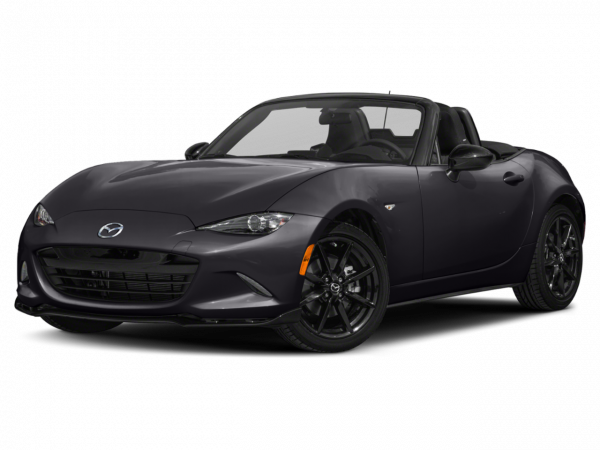 When the Mazda MX-5 Miata debuted for 1990, this snazzy little convertible was an instant hit. Marking a revival of the affordable sports car in a stripped-down roadster format popularized by British automakers in the 1950s and '60s, the MX-5 Miata brought reliability and modern engineering to the concept. Buyers lined up outside Mazda dealerships and gladly paid well over sticker price for the fetching new Miata.

Though the initial mania has long since faded, the Mazda MX-5 Miata continues to be a very popular convertible. Today's third-generation car continues the trend. It still changes direction like a go-kart, communicates the character of the road clearly to the driver and accelerates with an inspiring growl from its inline-4 engine. If you're in the market for an affordable sports car that provides plenty of top-down, open-road thrills, we highly recommend putting a new or used Mazda Miata on your list.

Current Mazda MX-5 Miata
The Mazda MX-5 Miata is a two-seat convertible powered by a 2.0-liter inline four-cylinder engine good for 167 horsepower. Depending on trim level, you'll find this power routed to the rear wheels through a five- or six-speed manual transmission or an available six-speed automatic. With the automatic, engine output drops to 158 hp.

The Miata is available in three trims: Sport, Club and Grand Touring. The lightly equipped Sport is aimed at enthusiasts on a budget, while the Club trim's added performance upgrades (strut tower brace, high-performance tires) and styling tweaks kick the Miata character up another notch. The Grand Touring is downright luxurious with its automatic climate control, leather upholstery and heated seats.

Customers who like the idea of combining open-air exhilaration with fixed-roof refinement can order a Miata with a power-operated retractable hardtop. The "PRHT" might seem to run counter to the Miata's less-is-more philosophy, but its simple design adds just 70 pounds to the car's curb weight and transforms top-up motoring into a much quieter, more weatherproof experience.

For more than two decades, the Mazda MX-5 Miata has been one of the purest forms of automotive fun, and the latest edition is no different. While we'd probably stick with a lightly equipped version for duty as a weekend toy, the many luxury features and roomier cabin of the latest generation make the Miata a more plausible choice for daily driving duties.

Used Mazda MX-5 Miata Models
The current third-generation Mazda MX-5 Miata dates back to 2006 when it was completely redesigned. A stiffer, more sophisticated chassis, a more powerful engine, a roomier interior and greater interior refinement were key improvements. A change in SAE testing methodology the following year reduced the horsepower rating to 166 from the initial rating of 170, but there is no functional difference. Initially, the lineup consisted of six trim levels: Club Spec, Base, Touring, Sport, Grand Touring and Third-Generation Limited Edition. For 2007, equipment was reshuffled into four trims -- SV, Sport, Touring and Grand Touring -- and the power-retractable hardtop (PRHT) also arrived that year.

A Special Edition model in Icy Blue paint was offered for 2008. That year also saw a 5-hp drop for cars with the automatic transmission. The following year the Miata received a mild refresh with tweaked exterior styling, engine revisions for a bit more power and fuel economy, a more aggressive suspension and some new convenience features. For '10, the PRHT was discontinued in Sport trim, and the value-oriented SV trim (available from 2007-'09) was dropped. Special editions continued to be offered and were essentially loaded Grand Touring PRHT models sporting unique colors and trim.

Right up through 2011, stability control was only available on the Grand Touring and then only as an option. For 2012 that safety technology became standard equipment across the board.

The second-generation MX-5 Miata was in production from 1999-2005. This Miata was the same size as the original MX-5, so while the cockpit was more cramped, the car felt much livelier and more responsive to drive, though its cornering limits were much lower and its ride was much worse. The addition of a glass rear window to the cloth convertible top made visibility better (the old plastic window would become cloudy from sunlight, requiring replacement).

This second-generation Mazda Miata was powered by a 1.8-liter four-cylinder engine that produced 140 hp and 119 pound-feet of torque. A five-speed manual transmission was standard and a four-speed automatic was optional. As before, base models were sparsely equipped, but items like leather upholstery and Bose audio were available on upper trims. In its second year, a streamlined model lineup including the Miata and Miata LS with three simplified option packages was introduced, while a Miata Special Edition with a six-speed manual debuted. For 2001, the adoption of variable valve timing bumped output to 142 hp and 125 lb-ft of torque, while the Special Edition's six-speed manual became optional on the Miata LS. For '04 a turbocharged Mazdaspeed model arrived featuring a 178-hp turbocharged engine, high-performance suspension and unique exterior styling enhancements.

The original, first-generation Mazda MX-5 Miata of 1990 offered a 1.6-liter four-cylinder engine that delivered 116 hp and 100 lb-ft of torque matched with a five-speed manual transmission. Just three colors were initially available: red, white and blue. Detail improvements saw the Miata through its first several years, with revised option packages, more power from a 128-hp 1.8-liter engine introduced for '94, and ultimately even luxuriously appointed M-editions (special paint colors, a tan convertible top, tan leather interior and 15-inch BBS wheels). Competition-minded individuals might want to focus on the Miata R-Package introduced for 1994, which turned the Miata into a race-ready street machine with drivetrain and suspension modifications. The final year for this first-generation model was 1997 (there was no 1998 MX-5 Miata).