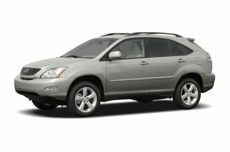 Ever diligent in its "Relentless pursuit of perfection," Lexus completely revamped its RX 300 midsize luxury crossover SUV for 2004. This already popular model in the Lexus lineup received a radical makeover that included a new 3.3-liter V6 and a resultant new name: RX 330.

With the first-generation RX's style being deemed a bit too soft, stylists gave the new Lexus RX 330 a more aggressive character. A sharply angled grille and rearmost roof pillar gave the RX 330 more visual attitude, while more power, more backseat room, a number of new high-tech features and tighter handling made the RX better than ever before. Still, the folks at Lexus were careful to retain the beloved features of the previous model, and this meant keeping a plush ride, a rich cabin, fantastic build quality, a serene demeanor on the open road and a strong reputation for reliability intact.

Those who think driving is a passion and not just a necessity should know that the Lexus RX 330 is still not a sport-utility vehicle with a sport sedan personality. If you're looking for thrills on twisty roads you'd be better suited by a few other choices that trade off practical aspects such as passenger and cargo space for a sportier drive. But for the greater majority of used luxury SUV consumers who just want as trouble-free and comfortable an experience as possible when dealing with commuting, shuttling the kids around and taking weekend road trips to see the relatives, the RX 330 is hard to top.

Still loosely based on the Toyota Camry platform of the time, the RX 330 benefited from the same new V6. At 3.3 liters, the newer V6 produced 230 horsepower and 242 pound-feet of torque, increases of 10 hp and 20 lb-ft, respectively, over the RX 300's V6. A broader torque curve along with a new five-speed automatic transmission gave the RX 330 more kick off the line as well as more energetic passing and merging performance. Once again, buyers could choose front- or all-wheel drive. Towing capacity, at 3,500 pounds, was unchanged and still relatively meager compared to truck-based SUVs.

Safety was also improved, as in addition to stability control there were now larger side airbags, side curtain airbags, a driver's knee airbag and a tire-pressure monitor.

While it retained the quiet and refined demeanor of its precursor, the Lexus RX 330 was more athletic. Acceleration was noticeably stronger (at 7.8 seconds, it was a full second quicker to 60 mph than before) and, when equipped with the optional air suspension, handling was tighter. The RX was still not as involving a drive as a few of its German and home country rivals, which provide superior steering feel and communication to the driver.

Shoppers looking for a used Lexus RX 330 won't go wrong with any year, as changes were minimal throughout its brief run. The most notable upgrades occurred in 2005 when Lexus made the power rear hatch standard and the navigation system gained voice control. The final year of the RX 330 brought power lumbar support for the front passenger, while revised SAE testing procedures changed the engine's output rating from 230 hp to 223, though no actual performance was lost.