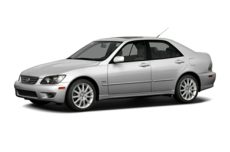 For years people associated Lexus with quiet, refined and luxurious automobiles backed by a competitive pricing strategy. "Sporty," however, was far from anyone's mind. Then, in 2001, the Lexus IS 300 sport sedan came along and toppled that image. Lexus wanted this one to be an extrovert and an athlete. With every throttle input and every turn of the steering wheel, this compact, rear-wheel-drive sedan sought to communicate with its driver. With its firmly tuned suspension and sticky high-performance tires, it had the running gear to back up those aspirations.

It also had the styling. One look at its wedge shape, clear-lens taillights and dramatic color palette, and it was obvious this sedan was intended for a younger, more trend-conscious buyer than other Lexus models. A sport wagon version called the IS 300 SportCross was added for 2002, and although it offered a little more utility, outward aesthetics still took precedence over function.

Inside, the compact Lexus IS 300 looked and felt different, too, thanks to its racy watch-dial-style instrumentation, drilled aluminum pedals and chrome shifter ball. By no means was this an elegant cabin, though. Hard plastic covered the dash and console, and feature content never quite measured up to the standards of the class. This half-hearted approach to luxury was the major criticism leveled against the IS 300 during its five-year run.

Although imperfect, the Lexus IS 300 and IS 300 SportCross did get the attention of younger, more performance-minded consumers, which set the stage for their carefully executed successors, the IS 250 and IS 350.

Most recent Lexus IS 300

Based on the Japanese-market Toyota Altezza, the Lexus IS 300 was not originally designed to be a luxury car. When the automaker decided to sell a version of this compact, rear-drive sedan in the U.S., it was retrofitted with additional luxury content and a larger engine -- the 3.0-liter inline six-cylinder already used in the midsize Lexus GS 300 sedan.

This 3.0-liter six was capable of 215 horsepower and 218 pound-feet of torque, and paired with a five-speed automatic transmission. Although this drivetrain propelled the IS 300 to 60 mph in the low 7-second range, a small but vocal niche of consumers and automotive writers cried foul when Lexus initially failed to offer a manual transmission. The company rectified this oversight in 2002, adding a five-speed manual gearbox option for the sedan. The IS 300 SportCross wagon, which also debuted for '02, was automatic only.

In road tests of the Lexus IS 300 sedan and wagon, our editors noted that their stiff body structures allowed Lexus to tune their double-wishbone suspensions for sharp handling without making the ride too stiff for commuters. "But the IS 300 is a car that needs to be exercised regularly," we wrote at the time. "Well balanced due to its rear-wheel-drive layout, it's an easy car to pilot aggressively, thanks to the responsive steering and braking, nimble size, excellent driving position and 3,280-pound curb weight. The steering isn't quite as precise as a BMW's, but it's close. Very close."

Inside, the IS 300's not-so-upscale cabin was snug, even by the indulgent standards of the premium compact car class. Tight legroom and narrow footwells made it difficult for adults to get comfortable in back, and storage space was minimal. Of the two body styles, the SportCross wagon was the more practical choice, thanks to its 21.8-cubic-foot cargo bay.

Past Lexus IS 300 Models

As a used car choice, the IS 300 makes a lot of sense. Sold from 2001-'05, it hasn't held its value as well as competitors like the Audi A4, BMW 3 Series, Infiniti G35 and Mercedes-Benz C-Class, but it offers equal or better performance in most areas. Build quality was always above average on the IS, and reliability is consistent with Toyota's typically strong reputation.

First-year Lexus IS 300 sedans were light on content, so it might be a good idea to confine your search to 2002 and newer models. Side curtain airbags, stability control, auto-dimming mirrors and a center armrest were all added to the standard equipment list for '02, while full leather seating and a navigation system became optional. Notably, stability control was only available on models with the automatic transmission. Changes were minimal in the years following.

Despite all the fuss the enthusiast crowd made about the manual-transmission option, manual-shift IS 300 sedans are rare commodities on the used car market, as the vast majority were sold with automatics.