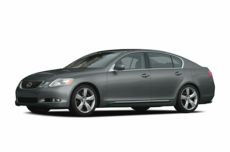 A refined and elegant car since its early-1990s inception, the midsize Lexus GS 300 sedan always came up short in the personality department. Partly, this was a problem of perception. Lexus initially promoted the rear-wheel-drive GS as a legitimate competitor to the elite European sport sedans, but the car's soft suspension, over-assisted steering and sluggish powertrain said otherwise. The fact that it cost just as much as its German rivals certainly didn't do it any favors either.

As a luxury sedan, the Lexus GS 300 was more convincing, particularly the third-generation model, which could be loaded with all the latest technology and upscale amenities. Cabin materials were typically of high quality, and everything was put together with exacting precision. Add in an outstanding reliability record and it's no surprise all three generations of the GS 300 proved popular with consumers, despite the fact that the automotive press never fully warmed to it.

Last redesigned for 2006, the third-generation Lexus GS 300 lasted only one year, as Lexus installed a powerful new 3.5-liter V6 in its rear-drive midsize sedan the following year, prompting a name change to GS 350. With the exception of their engines, the GS 300 and 350 are identical.

Upon its debut, there was nothing radical about the third-gen GS 300. Its bodywork was fresh and modern, but followed the same basic lines as the previous model. It was motivated by a new, all-aluminum 3.0-liter V6 capable of 245 horsepower, matched with a six-speed automatic transmission. In addition to the default rear-drive setup, buyers were given the option of all-wheel drive. With either drivetrain, acceleration was acceptably brisk (with 60 mph coming up in the 7-second range), though the heavier GS 300 AWD model felt soft off the line. Power delivery was undeniably smooth.

Lacking the adaptive suspension of the V8-powered GS 430, the Lexus GS 300 offered little inspiration when pushed around corners. Instead, it excelled as a highway cruiser, carrying itself with grace over most road irregularities while shielding its occupants from most outside noise. This made it easy for the GS 300 driver and passenger to settle back into its plush seats and enjoy the optional Mark Levinson sound system. An intuitive control layout contributed to the GS 300's relaxing nature.

In a 2006 comparison test of all-wheel-drive luxury sport sedans, a Lexus GS 300 AWD brought up the rear in a field of five. "With a V8 and the right options, the 2006 Lexus GS is a good sport sedan," our author wrote. "Give it a V6 and a softer suspension with all-season tires and there's less to get excited about. Luxurious and capable, the Lexus didn't have enough personality to stand out in this crowd."

Consumers shopping for a used Lexus GS 300 will come across plenty of examples from the second generation, sold from 1998-2005. Like the later version, it was a luxury sedan at heart and really wasn't tuned for aggressive, back-road driving.

It came with a 3.0-liter inline six-cylinder engine throughout its model run. The engine was actually a carryover from the first-generation GS 300, but now aided by variable valve timing, it offered a bit more usable torque. Horsepower came in at 225 or 220, depending on the model year. A five-speed automatic transmission drove the rear wheels. Power delivery was quite smooth, and acceleration was average among six-cylinder midsize luxury sedans.

Cloth upholstery was technically standard on GS 300s of this generation, but you'll be hard-pressed to find one on the used market that doesn't have the optional leather package. Features like 10-way power seats, a power tilt/telescoping steering wheel, dual-zone automatic climate control, stability control and front-seat side airbags were standard throughout the model run; side curtain airbags were included from 2001 onward. An excellent Nakamichi sound system was optional from 1998-2000; an equally good Mark Levinson system replaced it in 2001. Another new option for '01 was a DVD-based navigation system.

The original Lexus GS 300 was introduced for 1993 and sold through 1997. At the time, its sleek styling set it apart from other luxury sedans, both import and domestic. Interior accommodations were luxurious and roomy enough to accommodate occupants of all sizes. Tepid performance and high pricing were the big letdowns on this midsize luxury sedan, though the latter is obviously not an issue for used GS shoppers. All GS 300s of this generation had a 220-hp 3.0-liter inline-6. The best years to look at are 1996 and '97, as these models had a five-speed automatic transmission; earlier models had a four-speed automatic.