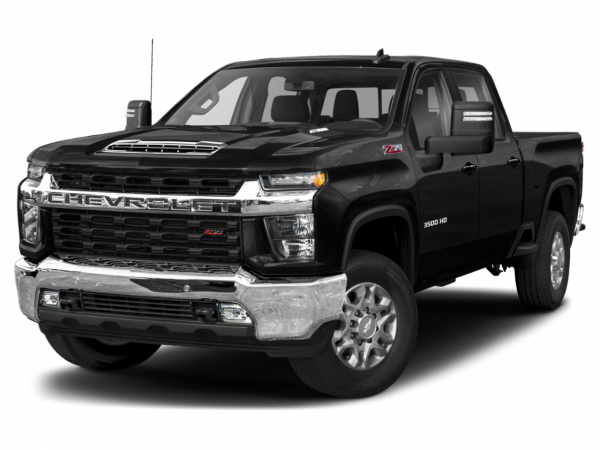 The "HD" part of Chevrolet Silverado 3500HD does not, in fact, indicate that this truck features crystal-clear wide-screen picture quality. In this case we're using the old-fashioned meaning of HD: "Heavy Duty." Thanks to its stiffened suspension, sturdy frame, powerful engine choices and available dual rear wheels, the 3500HD is a true workhorse meant for serious towing and hauling. Having said that, the latest model does offer an HD-quality 8-inch touchscreen, so it's not the one-trick pony it used to be.

Indeed, the Silverado 3500HD has evolved into a multitalented star. Compared to past Silverado trucks, the current model boasts a radically improved interior that enhances this big pickup's desirability. Nonetheless, it will always be the durable, capable mechanicals underneath that keep generations of Chevy loyalists coming back to the gold bowtie. The original definition of "HD" is alive and well in Chevy's toughest truck.

Current Chevrolet Silverado 3500HD
The current Silverado 3500HD has been redesigned for the 2015 model year. Like the 2500HD, it shares its comprehensively upgraded interior layout and technology features with the latest Silverado 1500. The exterior styling has also been updated to bear a family resemblance to the 1500. As expected, regular-, extended- or crew-cab body styles are offered, but the extended cab has been reinvented, featuring a new official name ("double cab") and four conventional doors rather than the traditional reverse-opening rear doors. The regular and double cabs come with a long cargo box only, while the crew cab offers either a short box or a long box.

The powertrains are borrowed from the previous generation, so a 6.0-liter V8 with 360 horsepower and 380 pound-feet of torque is the standard engine. A "bi-fuel" option permits this V8 to use compressed natural gas (CNG), with CNG output falling to 301 hp and 333 lb-ft. Either way, a six-speed automatic transmission handles the shifting duties. The optional 6.6-liter Duramax diesel V8 (397 hp, 765 lb-ft) continues to be paired with an exclusive Allison six-speed automatic. Every 3500HD can be equipped with either rear- or four-wheel drive, and all cab styles can be outfitted with a dual-rear-wheel setup. An automatic locking rear differential is standard across the board.

Some of the 3500HD's upscale standard features are optional on lesser trims. Other options include power-adjustable pedals, front and rear parking sensors, a tilt-and-telescoping steering wheel, a heated steering wheel, Bose audio and the Z71 Off-Road package with special suspension components. New for this 3500HD is the High Country package, which matches high-end rival models with a saddle-brown leather interior and basically every premium feature in the book. Also new are optional safety technologies like lane-departure warning and forward-collision alert.

In terms of towing and hauling capability, the current Silverado 3500HD isn't much more capable than its predecessor. The engines are the same, after all, and although the structure has been reinforced here and there, it was already extremely stout. The interior, however, is a giant leap for Chevy-kind. The formerly crude Work Truck dashboard looks downright respectable these days, while the LTZ's leather trim and 8-inch touchscreen would do a luxury SUV proud. We've been knocking the 3500HD's lackluster cabin appointments for years, but now they're fully up to snuff. We're also fans of the new double cab with its four normal doors; it's a "Why didn't they think of that before?" kind of idea (of course, Ram thought of it years ago with its Quad Cab). Throw in the monstrous, battle-tested Duramax diesel, and you've got a full-spectrum product that's tough to top. But trucks in this class are always jockeying for pole position, so don't sleep on the latest from Ford and Ram.

Used Chevrolet Silverado 3500HD Models
The previous-generation Chevy Silverado 3500HD was produced for the 2007-'14 model years. Although its appearance remained largely unchanged, the 2011-'14 truck gained a stronger, fully boxed frame, beefier suspension components and additional electronic aids. The standard engine was initially a 6.0-liter gasoline V8 that made 353 hp and 373 lb-ft of torque, while the 6.6-liter Duramax diesel was rated at 365 hp and 660 lb-ft. The gas V8 crept up to 360 hp and 380 lb-ft for 2010; the Duramax, meanwhile, was overhauled for 2011 and re-rated at 397 hp and 765 lb-ft. Both engines had a six-speed automatic transmission, with the diesel upgrading to an Allison unit with manual shift control.

This 3500HD was available in regular-, extended- or crew cab designs, with rear- or four-wheel drive and optional dual rear wheels. The extended cab, which was dropped for the 2014 model year, employed reverse-opening rear doors. Extended- and crew-cab models were offered in three trim levels: Work Truck, LT and the more luxurious LTZ that featured an upgraded cabin with the same higher-quality dashboard found in the Tahoe and Suburban. The regular cab came in Work Truck and LT trims only.

In a comparison test of heavy-duty pickups, the mechanically identical GMC Sierra HD came out on top against its Dodge and Ford competitors. Though we found its cabin less inviting, the big GM trucks' recently revised frame, suspension and diesel engines proved hard to beat. Although multigenerational brand loyalty may dictate which heavy-duty pickup you take home, sticking with (or switching to) a used Silverado 3500HD of this vintage would be a solid decision.

Aside from the structural and powertrain updates noted above, changes were minimal during this 3500HD's production run. Most notably, a rearview camera was made available for '09 and the Work Truck got standard air-conditioning for 2010.