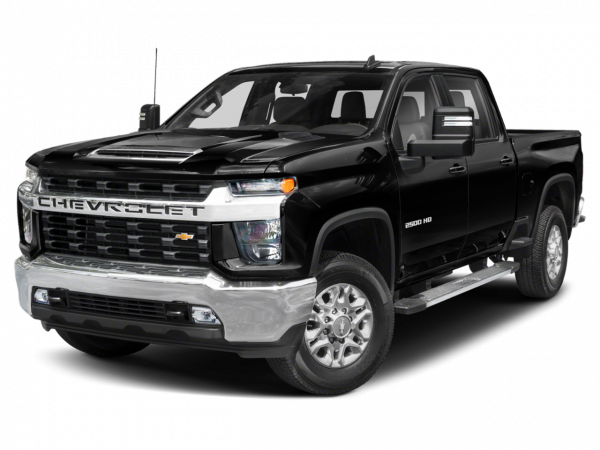 Though "HD" is a fixture in our digital-age parlance, rest assured that the Chevrolet Silverado 2500HD does not, in fact, involve a television. In this case we're talking about the old-fashioned meaning of HD: "Heavy Duty." The Silverado 2500HD is a true workhorse meant for big-league towing and hauling tasks, even if the latest model does offer an HD-quality 8-inch touchscreen.

Indeed, the current-generation Silverado 2500HD has easily the nicest interior yet. For years, Chevy trucks were rebuked for their lackluster cabins filled with hard plastics and poor fit and finish, but this criticism now only applies to earlier 2500HD models. Nonetheless, it will always be this truck's durability and tremendous workaday capabilities that keep generations of Chevy loyalists coming back to the gold bowtie. For an intermediate heavy-duty pickup, new or used, it's hard to go wrong with the Silverado 2500HD.

Current Chevrolet Silverado 2500HD
The current Silverado 2500HD has been redesigned for the 2015 model year. It borrows its vastly improved interior from the latest Silverado 1500; similarly, its numerous new features and revised exterior styling are inspired by its lighter-duty sibling. Like the previous 2500HD, the current model is available in regular-, extended- or crew cab body styles, with a long or short cargo box and rear- or four-wheel drive. Note that the extended cab is now known as the "double cab" and employs four conventional doors (like a smaller crew cab) rather than the former reverse-opening rear doors.

The powertrain options carry over from the previous generation, meaning a 6.0-liter V8 with 360 horsepower and 380 pound-feet of torque comes standard. As before, a "bi-fuel" option allows this V8 to run on compressed natural gas (CNG), with CNG output dropping to 301 hp and 333 lb-ft. Either way, a six-speed automatic transmission handles the shifting. The available diesel engine is the familiar 6.6-liter Duramax V8 (397 hp, 765 lb-ft), paired with an exclusive Allison six-speed automatic.

As usual, some of the fancier standard features can be added to lower trims as options. Other extras include power-adjustable pedals, front and rear parking sensors, a tilt-and-telescoping steering wheel, a heated steering wheel, Bose audio and the Z71 Off-Road package with special suspension components. A new offering is the High Country package, which emulates high-end rival models with saddle-brown leather and basically every premium feature in the order guide. The 2500HD also gains high-tech safety options like lane-departure warning and forward-collision alert.

With its carryover engines, the latest Silverado 2500HD offers only incremental progress on the towing and hauling fronts. Of course, the previous model was already an absolute beast, so it makes sense that Chevy would focus on other areas. In particular, the interior is a revolutionary improvement -- even the Work Truck dashboard looks respectable now, while the LTZ's leather trim and 8-inch touchscreen would do a luxury SUV proud. We used to bag on the 2500HD for its chintzy cabin, but now it's fully competitive in this respect. We also like the new double cab with its four normal doors; it's a "Why didn't they think of that before?" kind of idea. Throw in the epic, time-tested Duramax diesel, and you've got an all-around winner that's hard to beat. Things change quickly in this segment, though, so be sure to keep tabs on the latest from Ford and Ram as well.

Used Chevrolet Silverado 2500HD Models
The previous-generation Silverado 2500HD was produced for the 2007-'14 model years with either rear- or four-wheel drive. The standard engine was a 6.0-liter V8 initially rated at 353 hp and 373 lb-ft of torque, while the optional 6.6-liter Duramax diesel V8 made 365 hp and 660 lb-ft. The gas V8 inched up to 360 hp and 380 lb-ft for 2010; meanwhile, the Duramax was overhauled for 2011 with 397 hp and 765 lb-ft. All 2500HD models of this generation were equipped with a six-speed automatic transmission, but the diesel got a stronger one (not that the standard unit was exactly a weakling) with manual shift control.

In an Edmunds.com comparison test of heavy-duty pickups, the mechanically identical GMC Sierra HD of this generation came out on top against its Dodge and Ford competitors. Though we found its cabin less inviting than the others, the recently revised frame, suspension and diesel engine proved hard to beat. As such, a used Silverado 2500HD from this era makes for a great used truck. Its capabilities remain formidable, and depreciation can deliver one to your driveway for a fraction of what it cost new.

Even though its appearance remained largely unchanged, this 2500HD saw some significant changes during its run. The 2011 model received a stronger, fully boxed frame, beefier suspension components and additional electronic aids, so that's something to keep in mind when looking at previous years. As noted above, the engines were also updated along the way. Other changes were minor, including an optional rearview camera for 2009 and hard-drive-based functionality for the navigation system in 2011.

The preceding Silverado 2500HD was sold from 2001-'06 in configurations much like those of its successors. It lived on for one additional year in '07 as the "Classic." These trucks came in standard, Work Truck (after 2003), LS and LT trim levels. The standard engine was a 6.0-liter V8 that made 300 hp and 360 lb-ft of torque. There were two optional engines: an 8.1-liter gasoline V8 producing 340 hp and 455 lb-ft of torque and a 6.6-liter turbodiesel producing 300 hp and 520 lb-ft. This diesel was upgraded in 2006 for more power (360 hp and 650 lb-ft of torque), added refinement and fewer emissions. These engines carried over for the Classic.

As with subsequent Chevrolet Silverado 2500HD models, we were impressed at the time by this generation's powerful engine lineup and substantial towing and hauling abilities. It was a reasonably comfortable truck for everyday use, but it predictably lacked the plush ride of its light-duty siblings. Any of the three available engines will provide capable acceleration and ample towing power, but the diesel V8 is the best choice for those who tow heavy loads -- especially the more powerful Duramax from '06. Our principal beef concerned the subpar interior design, materials and build quality. Chevy improved it gradually during its lifespan, including notable updates for '03, but it was never quite up to snuff.

Prior to this, Chevrolet heavy-duty pickups ran from 1988-2000 and were simply known as the 2500 (3/4-ton) and 3500 (1-ton). In keeping with tradition, one could choose either rear-wheel drive (indicated by a "C", e.g. "C2500") or four-wheel drive (indicated by a "K"). Trim levels for these C/K2500 trucks included the base Cheyenne and top-line Silverado, which changed to base and LS for 1999. Strengths of these trucks include strong, durable powertrains, while weaknesses center on sketchy build quality and materials within the cabin.