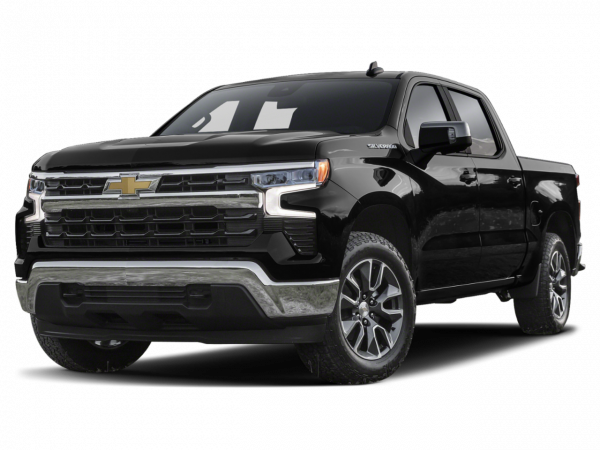 Like its rivals, today's Chevrolet Silverado 1500 is available with a wide variety of body styles, powertrains and trim levels. Thanks to this flexibility, the half-ton Silverado pickup is just as adept at serving as the weekday family car as it is at transporting home-improvement supplies or towing a boat on the weekends. And if you want something fancy, there are always loaded-up versions that come complete with a rumbling V8, flashy wheels, bucket seats and high-tech infotainment options.

Older versions of the Silverado 1500 pickup have been praised for their strong work ethic but criticized for having bland cabins of questionable quality. The current version, however, exhibits greatly improved fit and finish. Where there was once an abundance of hard panels and uneven gaps, the Silverado now features richer materials and precise fitments while maintaining its hard-working nature. Of course, there are other compelling choices in the full-size pickup truck market, but the half-ton Chevrolet Silverado is a solid pick no matter what it's used for.

Under the hood, the base V6 engine has gone from zero to hero. Although it shares its 4.3-liter displacement with the previous-generation V6, that's all they have in common, as the current V6 makes 285 horsepower -- a 90-hp gain. Also, the new V6 is available across the lineup, whereas the old one was limited to basic work-truck models. The other engines have hit the gym as well: the 5.3-liter V8 now makes 355 hp, while the 6.2-liter V8 trots out 420 horses. All three engines use a six-speed automatic transmission that yields more frugal fuel economy, particularly from the overhauled V6.

As usual, the Silverado is available in a variety of body styles. There are three cab configurations (regular, extended, crew) and three bed lengths (5.75 feet, 6.5 feet, 8 feet). Available trim levels, depending on which combination you choose, include Work Truck, LT, LTZ, High Country and Z71. The Work Truck is better equipped than it used to be, providing full power accessories, USB connectivity and optional Bluetooth along with the expected vinyl upholstery. The LT steps up to a chrome grille, an "E-Z" lift/lower tailgate, alloy wheels and cloth upholstery. The premium LTZ throws in more chrome, a power sliding rear window, a tilt-and-telescoping steering wheel, a rearview camera, heated power seats, leather upholstery, dual-zone automatic climate control and an 8-inch touchscreen with MyLink smartphone integration.

The luxurious High Country trim gets niceties like Bose audio and fancier power seats, while the Z71 boasts an off-road-ready suspension and other heavy-duty components, plus some mean-looking styling tweaks. Silverado options include a rear-seat Blu-Ray entertainment system, a navigation system and multiple towing packages.

In reviews of the current Chevrolet Silverado 1500, we've remarked that its subtle styling changes conceal serious progress under the skin. Tops on that list is the capable new V6, which finally makes Chevy a viable six-cylinder player in this segment. But we've also noticed significant refinements in the Silverado's ride and handling, thanks in part to a more robust structure that's less prone to surface-induced shuddering. Not that this truck has gone soft; on the contrary, its towing capacity exceeds 11,000 pounds with the 5.3-liter V8 and hits a mind-boggling 12,000 pounds with the brawny 6.2.

Inside, the current Silverado is a whole new ballgame. Ingress and egress have been streamlined in the redesigned extended cab (double cab), which comes with crew-cab-style conventional doors in place of the old reverse-opening rear doors. Materials quality is appreciably higher across the board, so buyers of lower-trim models are no longer stuck with substandard plastics and the like, while nicer models have it better than ever. The attractive, easy-to-use 8-inch touchscreen with mobile-app functionality makes Chevy's workhorse as high-tech as some luxury sedans. Bottom line: This Silverado is the complete package.

Used Chevrolet Silverado 1500 Models
The previous-generation Silverado 1500 was produced for the 2007-'13 model years. It was available in three cab styles (regular, extended and crew) and trim levels ranging from no-frills "Work Truck" to plush LTZ. The most popular trims were the midlevel LS and LT, which provided many popular features as standard, including air-conditioning, full power accessories and a CD player. Significant options included a variety of towing packages, the Z71 Off-Road package and a navigation system.

Powertrain choices encompassed everything from a workaday 4.3-liter 195-hp V6 to a muscular 6.2-liter V8 with 403 hp, but most Chevy Silverados of this vintage were fitted with either a 295-hp 4.8-liter V8 or a 315-hp 5.3-liter V8. A four-speed automatic transmission with a tow and haul mode was standard on Silverado pickups with the base V6 and 4.8-liter V8. The 5.3-liter and 6.2-liter V8 received a six-speed automatic toward the end of this production run.

Calling cards of this Silverado included no-nonsense performance, a reasonably refined and quiet ride (even with the heavy-duty towing package) and a comfortable cabin that admittedly looks a little old compared to some contemporaries. We mentioned a few other downsides in reviews, including minor interior ergonomic issues, underwhelming performance from the base V6 and the hesitant responses of the four-speed automatic transmission while downshifting. The excellent six-speed automatic, however, is hard to fault with its smooth, on-point performance.

During its lifespan, the 2007-'13 Silverado remained largely the same, but keep in mind that the initial top-of-the-line engine was a 6.0-liter V8 rated at 367 hp; the 6.2-liter V8 didn't replace it until the 2009 model year. That same year, the six-speed automatic transmission was introduced as an option for the 5.3- and 6.2-liter V8s, and it became standard with those engines for 2010.

The previous Silverado 1500 was produced from 1999-'06. Although Chevrolet has produced a pickup truck since 1918, this generation marked the debut of "Silverado" as the big truck's formal name instead of a trim-level designation (which it had served as since the 1970s). Underneath the handsome new styling, a fresh family of V8s debuted, ranging in size from 4.8 to 6.0 liters. They offered output running from 255 hp with the smallest 4.8-liter to 345 hp from the high-output 6.0-liter V8 in the Silverado SS. A base V6 was also available, but as expected, most of these Chevy Silverados came fitted with one of the V8s. (Buyers looking at the heavy-duty series Silverado 2500HD and 3500 of this generation could also get a 6.6-liter turbodiesel V8 or an 8.1-liter gasoline V8.) A unique four-wheel-steering option (called QuadraSteer) came online about midway through this generation and cut the truck's turning circle down to 37.4 feet -- around 10 feet less than a typical full-size pickup. Unfortunately, QuadraSteer was discontinued for '06, as buyers were put off by the high cost of this option.

Consumers more interested in function than flash should be happy with a used half-ton Silverado from this era. The truck offered plenty of performance and work capacity, though it was hampered by a dated cabin design fraught with cheap materials and below-average fit and finish.

The previous generation of full-size Chevrolet pickups -- the last of the so-called "C/K" line -- ran from 1988-'98 and comprised three distinct versions: 1500 (half-ton), 2500 (3/4-ton) and 3500 (1-ton). Standard cab and extended cab body styles were offered, as was a crew cab, though the latter was actually from the previous 1981-'87 generation. Although six-cylinder and diesel V8s were offered, chances are strong that most Chevy trucks from these years will have either a 5.0- or 5.7-liter V8 mated to a four-speed automatic. In keeping with tradition, one could choose either rear-wheel drive (indicated by a "C", e.g. "C1500") or four-wheel drive (indicated by a "K"). Trim levels for these C/K trucks include the base Cheyenne, midlevel Scottsdale and top-line Silverado. Strengths include strong, durable powertrains, while weaknesses center on sketchy build quality and materials within the cabin.