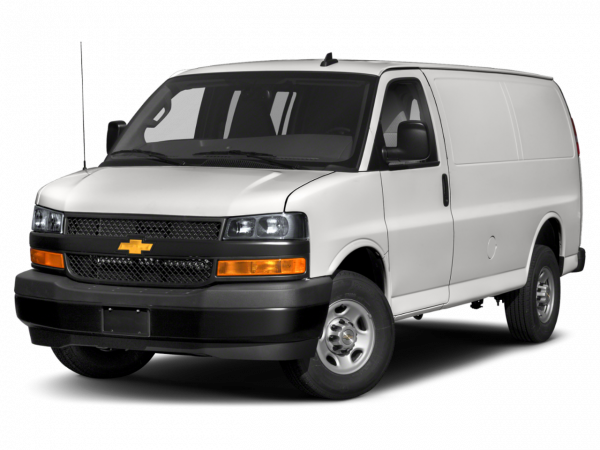 Some things in the good ol' USA just don't change all that much, such as diehard Red Sox fans, Wheel of Fortune and Donald Trump's comb-over. The same could also be said for full-size passenger vans. The Chevrolet Express has soldiered on for nearly four decades with only one major redesign happening during that time.

A rolling testament to the "If it ain't broke, don't fix it" school of vehicle design, the Express offers a passenger van's timeless features of powerful engines and space, space and…space. With seating for up to 15 adults, these vans are ideal for sports teams, really big families and, of course, commercial use.

Over the years, the Chevrolet Express has enjoyed a healthy share of the full-size passenger van segment. Its main competition has been the even more aged Ford Econoline and the now retired Dodge Ram van. With its variety of powertrain and seating options, the Express is well-suited for those who need a big van, and it offers superior driving dynamics when compared to its Blue Oval rival.

For shoppers interested in a late-model van, there's also the Mercedes-Benz Sprinter (previously sold as the Dodge Sprinter) to consider. It offers several advantages over traditional American full-size vans, such as a frugal turbodiesel engine and a taller cabin that allows adults to fully stand up. However, the Chevy Express (along with its GMC Savana corporate twin) is still a solid choice thanks to its variety of passenger capacities, strong towing performance and relatively pleasant driving experience.

Current Chevrolet Express Passenger Van
The Chevrolet Express is available in 1500, 2500 and 3500 versions. The 3500 is also available with an extended wheelbase, which allows for 15-passenger capacity. Two trim levels known as LS and LT are offered. The LS is typically what fleet buyers purchase, so it's a bit plain, with only air-conditioning and a stereo as the key standard features. If this is going to be your family vehicle, the LT, with its rear A/C, full power accessories, cruise control and plusher seats is the better choice. Standard on all are stability control and side curtain airbags.

The 1500 series comes with a 5.3-liter V8 making 310 horsepower, backed by a four-speed automatic transmission and standard rear-wheel drive or available all-wheel drive. The rear-drive-only 2500 gets a standard 4.8-liter V8 with 280 hp or an optional 6.0-liter V8 generating 323 hp. Both engines are mated to a six-speed automatic. The 6.0-liter V8 is standard on rear-drive-only 3500 series models. Optional for the 3500 is a 6.6-liter turbodiesel V8 putting out 260 hp and 525 pound-feet of torque. Both 3500 series engines are also connected to a six-speed automatic.

As it has for years, the big Chevy should handle whatever folks throw at it. Furthermore, in a two-horse race against the Econoline, the Chevy Express boasts superior driving dynamics and somewhat more modern styling. Compared to a Mercedes-Benz Sprinter, however, the Express trails on both counts along with interior space. It's much cheaper, though.

Used Chevrolet Express Passenger Van Models
The Chevrolet Express last received a complete redesign back in 1996. To mark this rebirth, the name was changed from "Sportvan" to "Express." New body styling that featured high-mounted taillights, new power plants and an updated cabin with improved ergonomics gave the Chevy the edge compared to its Ford and Dodge competition.

The luxury-themed LT debuted for 2001, but the biggest change during this generation happened in 2003, when an enhanced lineup of engines debuted (a 200-hp V6, 295-hp 5.3-liter V8 and 300-horse 6.0-liter V8) and all-wheel drive was offered for the first time. The standard transmission was a four-speed automatic. During this time, there was also a 3/4-ton 2500 version offered, as well as base and LS trims.

For 2007, the V6 was dropped, while the V8s were upgraded to 301 hp and 323 hp, respectively. The following year the interior was redone, and stability control and side curtain airbags became standard. For 2010, the 5.3-liter was bumped to 310 hp and the 6.0-liter V8 got a six-speed automatic transmission. The 4.8-liter V8 and turbodiesel V8 did not arrive until 2011.

Prior to the '96 reincarnation, the Chevrolet Express van rode the same basic platform for nearly three decades and the sheet metal barely changed in a quarter century. Engine choices ranged from an inline-6 all the way up to 6.2-liter diesel and 7.4-liter gasoline V8s. The most popular engine was Chevy's tried-and-true 5.7-liter (350-cubic-inch for the older vans) V8. Up to 1995, the model designations consisted of G20 and G30 (a G10 was available prior to '94), while the top trim level went by the oh-so-suburban name of Beauville.

Visual updates through the '70s, '80s and early '90s consisted chiefly of grille and headlight changes. Periodic hardware updates, such as the adoption of a four-speed automatic and fuel injection in the mid-'80s and dual airbags in the mid-'90s kept the big Chevy van viable in this niche market segment.

Showing 1 through 10 of 86.00
Chevrolet Express Reviews By Year: