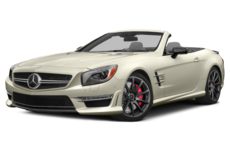 Easily one of the most recognizable automotive icons of the last half century, the Mercedes-Benz SL-Class has long epitomized elegance and performance in the grand touring coupe/roadster segments. From the early 300SL models of the 1950s to the present-day retractable hardtops, this two-seater has never wavered from offering the best that Mercedes-Benz could offer.

Regardless of what SL vintage you're considering, you can be certain it will have cutting-edge technology and a comfortable cockpit. The downside to packing in all those safety and luxury features is that the SL is rather big and heavy. As such, a Benz SL isn't going to feel nimble in the vein of a pure, elemental sports car. But in terms of comfort, refinement and image, a new or used SL-Class is nearly peerless.

The SL550 features a turbocharged 4.7-liter V8 that produces 429 horsepower and 516 pound-feet of torque. Opt for the SL63 and you'll get a turbocharged 5.5-liter V8 good for 530 hp and 590 lb-ft. Meanwhile, the SL65 AMG packs a turbocharged 6.0-liter V12 with 621 hp and 738 lb-ft. All engines send their considerable power to the rear wheels through a seven-speed automatic transmission. The latter is modified in the AMG models to provide quicker, more responsive gearchanges.

It shouldn't be surprising that there is a substantial amount of luxury and numerous high-tech features for the SL-Class. Highlights include heated and ventilated seats, navigation, adaptive cruise control, a rearview camera, a neck-level heating system and a whole suite of media types. And these are just the tip of a very deep iceberg. In addition to their powerhouse engines, the AMG versions also feature specific suspension, steering and brake upgrades, along with several visual enhancements inside and out.

With its sizable dimensions, the SL-Class boasts what could easily be the most accommodating cabin of any two-seat convertible. Drivers taller than 6 feet will fit with sprawling room to spare, and there's even a decent amount of storage space. The trunk is roomy with the top raised and big enough for even large suitcases. You'll have to pack lighter if you want to lower the roof, as it consumes some trunk space when stowed, but the remaining space is still adequate.

As for the roof itself, it remains a novel feature of the SL even if its metal structure and graceful movements are now old hat. Spanning almost the entire width of the car, its panoramic glass portion provides a wonderfully open feel even when the weather dictates you remain indoors. With optional "Magic Sky Control," this glass panel goes from varying degrees of transparent to dark at the touch of a button. Think of a giant, driver-controlled pair of transition sunglasses and you get the idea.

In total, the Mercedes-Benz SL-Class is an innovative, refined and exciting high-end luxury convertible. Those seeking ultimate driving precision and thrills will be better served by one of its more exotic rivals, but for top-down grand touring, it is tough to beat.

Used Mercedes-Benz SL-Class Models
The current-generation Mercedes-Benz SL-Class was introduced for 2013. Once again a retractable-hardtop convertible, it weighs less than its predecessor thanks to extensive use of aluminum construction. The newer SL is also a bigger and more rigid car, which boasts an even larger selection of luxury, convenience and safety goodies than its forebear. Apart from some equipment shuffling and its lacking an analog dash-top clock, these SL models are identical to today's car.

The previous-generation Mercedes-Benz SL was produced from 2003 through 2012; however, a midcycle refresh for '09 means that earlier cars can be differentiated by their less aggressive styling and older generations of Mercedes electronics interfaces. The steering and suspension were also altered at this time for more precise handling.

Regardless of year, this luxury roadster was one of our editors' favorite vehicles of any sort. With a beautifully integrated retractable hardtop that required just the touch of a button to raise or lower, this SL offered the fun of an open roadster along with the security and quiet comfort of a closed coupe. Although it was produced for a very long time by automotive industry standards, this SL's overall desirability never really waned thanks to prudent updates to its equipment, engines and the aforementioned electronics.

Upon this generation's release for 2003, the SL lineup consisted of just the SL500 (5.0-liter V8 with 302 hp), but it was joined by the SL55 AMG a few months later. Besides its 493-hp supercharged V8, the 55 came with AMG-specific suspension, steering, brakes and styling elements.

Besides the wealth of other, previously described changes for 2009, the SL63 supplanted the SL55. The SL63 AMG came with a 6.2-liter V8 good for 518 hp and a new seven-speed automated manual transmission. The hyper, low-volume SL65 AMG Black Series was also produced for this year only. There was no 2010 SL-Class, and the SL600 was discontinued at the same time.

With its effortless performance, adaptive suspension, fast-retracting hardtop and wealth of luxury and safety features, we've found it was easy to fall in love with this generation of the Mercedes-Benz SL-Class. Our complaints are few, centering chiefly on the SL's older version of Mercedes' COMAND interface, which even in its final years used a dash-mounted multidirection button pad rather than the more ergonomic console-mounted knob of newer Benzes. In total, a well-loved used SL-Class should make a wonderful second car, with the same sort of timeless appeal shared with its illustrious predecessors.

The 1990-2002 Mercedes-Benz SL-Class offered six-, eight- and 12-cylinder engine choices. Prior to 1994, the cars were named slightly differently, as the numbers came before the letters. Six-cylinder cars (300SL and SL320) made 228 hp, the 500SL/SL500 offered 322 or 302 hp (depending on the year) and the 600SL/SL600 made 389 hp. The sixes could be matched to either a five-speed manual or five-speed automatic, while the V8 and V12 versions initially came with a four-speed automatic only. (They were upgraded to a five-speed unit in 1996.) Apart from a navigation system, these cars could be had with most any luxury and safety feature, such as dual-zone climate control, integrated cell phone, HID headlights and stability control.

Although this generation of the Mercedes SL offered spirited performance, decent handling and plenty of luxury, the driving dynamics proved disappointing to our staff. The culprits were steering that felt somewhat loose on center, a platform that lacked this marque's typically solid feel (giving rise to interior squeaks) and brakes that, although strong in panic situations, felt mushy in normal use. At the time, we also felt the Benz SL was overpriced compared to other competing luxury roadsters, though depreciation has largely negated this potential drawback.

With a run that lasted 18 model years, the 1972-'89 SL was much simpler, both in terms of the vehicle itself and trim levels, than the ones that followed. This Mercedes-Benz SL was powered by various V8 engines, starting with a 4.5-liter (around 180-200 hp), changing to a 3.8-liter of just 155 hp and then adopting a stout 5.6-liter (227 hp) for the final years. The names of these SLs went from 350SL (only for 1972) to 450SL, 380SL and then 560SL. Although you may see a 500SL advertised, be warned that it's a gray-market car, a European version modified by some unknown shop to meet U.S. emissions and crash standards. For obvious reasons, we recommend you steer clear of a gray-market example.