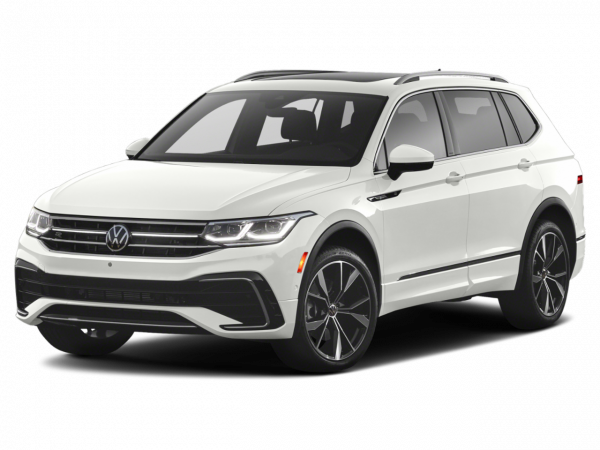 The Volkswagen Tiguan provides a different take on the compact crossover segment. Really, how could it not with a name like Tiguan, the result of VW's marketing department apparently melding the words "tiger" and "iguana" together? The car itself isn't quite so head-scratching, but it's definitely outside the norm. Whereas many competitors are utilitarian in nature, with an emphasis on practicality, the Tiguan's refined driving manners and upscale interior lend it a distinctly European flavor that you won't find elsewhere.

So while it may not be the best choice for families or those who prioritize maximum cargo space, a new or used Tiguan will still satisfy the basic SUV needs of others looking for an elevated seating height and the all-weather assurance of all-wheel drive. Plus, if you're familiar with the Volkswagen brand, the Tiguan's numerous similarities to the previous-generation Jetta and Golf will make the switch to an SUV that much easier.

Current Volkswagen Tiguan
The Volkswagen Tiguan is a four-door, five-passenger compact crossover. It's powered by a 2.0-liter turbocharged four-cylinder that generates 200 horsepower and 207 pound-feet of torque. The base front-wheel-drive version comes with either a six-speed manual or a six-speed automatic transmission, but all others are automatic-only. All-wheel drive can be specified on all but the base, manual-equipped Tiguan.

Five trim levels are available: S, SE, SE with Appearance, SEL and R-Line. All come standard with plenty of features, including eight-way manual front seats, a leather-wrapped steering wheel, a 40/20/40-split-folding and reclining rear seat, Bluetooth phone and audio connectivity and an audio system with an auxiliary audio jack and a CD player. Moving up through the trims adds features such as the Car-Net telematics system, keyless ignition and entry, xenon headlamps, heated power seats, leather seating, a rearview camera and a navigation system. The R-Line trim takes a sporty tack with its 19-inch alloy wheels, sport-tuned suspension and body styling tweaks.

In reviews, we've noted that the Volkswagen Tiguan stands apart thanks to its sleek European design and high-quality interior. Controls are large and well-placed, and the cabin is adorned with genuine aluminum trim. These virtues are matched with equally solid driving dynamics. Unfortunately, the Tiguan lacks the cargo space of some of its competitors. With 23.8 cubic feet in the rear, the Tiguan offers less space than a Jetta wagon. With the second row folded down, maximum capacity grows to 56.1 cubic feet, which is still well shy of class leaders such as the Honda CR-V and the Toyota RAV4. The Tiguan can also command a hefty price premium over other compact utes.

Used Volkswagen Tiguan Models
The Volkswagen Tiguan was introduced for 2009. Until 2012, changes consisted chiefly of trim level and equipment shuffling. For 2012, however, the front-end styling was refreshed and fuel mileage was slightly improved. Other than lacking the R-Line trim level and the Car-Net telematics service, these latter Tiguans are similar to today's lineup.