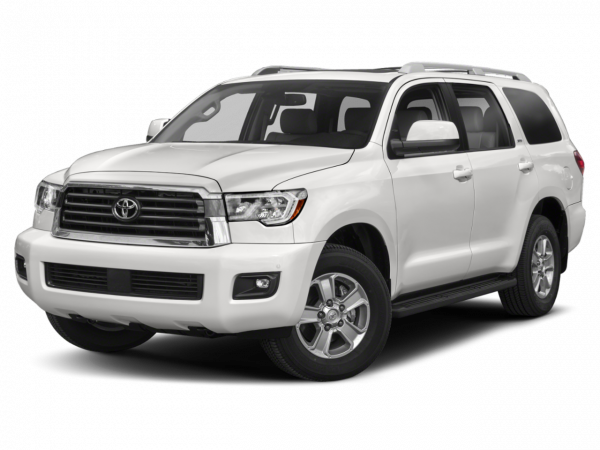 As the largest SUV in the Toyota lineup, the full-size Sequoia is designed to accommodate families who need three real rows of seating, a fair amount of off-road capability and the ability to tow a boat or other trailer. In reality, we suspect that only a small percentage of Toyota Sequoia owners are especially outdoorsy. But this hasn't prevented the Sequoia from becoming a popular choice due to its refined road manners and comfortable interior.

Throughout its run, the Toyota Sequoia has been notable for its V8 power, choice of two- or four-wheel drive and its roomy interior. Newer and larger Sequoias are spacious enough for large families and offer enough in the way of creature comforts to justify the rather hefty price when nicely optioned. Throw in attractive styling inside and out and until recently, a choice of two powerful V8 engines, and you've got the makings of a very competitive full-size SUV. Earlier Sequoias, though not quite as capable as competing models of the same period, are also a solid pick.

Current Toyota Sequoia
The Toyota Sequoia is a full-size SUV that is based on the Tundra pickup truck. With traditional body-on-frame construction, it is blessed with greater off-road and towing capabilities than its car-based competitors. Fortunately, Toyota has managed to dial out much of the bouncy pickup truck ride qualities, making it quite pleasant to drive on a day-to-day basis. Power comes by way of a 5.7-liter V8 with 381 horsepower and 401 pound-feet of torque. A six-speed automatic is the only transmission offered, but buyers can choose between rear- and four-wheel drive.

A large SUV, the Toyota Sequoia seats seven or eight, depending on the configuration. Thanks to an independent rear suspension (unlike its Tundra pickup platform-mate), the third-row seat folds flat into the floor, a welcome departure from the previous-generation Sequoia. Fold all the seats down and there are a substantial 120 cubic feet of cargo room.

In our reviews of the current Toyota Sequoia, we've been impressed with its surprising maneuverability, overall refinement and the power generated by the 5.7-liter V8. Other than a funky control layout that puts some knobs closer to the passenger than the driver, we can't find much to fault. For a truck-based, full-size SUV, the Sequoia is an excellent choice.

Used Toyota Sequoia Models
The current Toyota Sequoia represents the second generation that debuted for 2008. Initially, it had a 276-hp 4.7-liter V8 and five-speed automatic as standard. The 5.7-liter V8 was optional. Model-year 2009 was skipped, while the following year saw the arrival of front-seat knee airbags, standard Bluetooth and iPod integration as well as a more powerful 4.6-liter base V8 that produced 310 hp and 327 lb-ft of torque. This base engine was short-lived, however, as Toyota discontinued it for the 2013 model year, leaving the 5.7-liter V8 as the only engine available. Other than lacking the Entune smartphone integration system, these latter Sequoias are identical to the current version.

The first-generation Toyota Sequoia full-size SUV debuted for the 2001 model year. In many ways, this eight-passenger SUV was the first serious import challenge to the large domestic sport-utilities. Initially, its standard 4.7-liter V8 produced 240 hp and was mated to a four-speed automatic transmission. There were two trim levels -- SR5 and Limited -- and each was available with either two-wheel drive or four-wheel drive. Limited models were decked out with luxury items, but even base SR5 models had a decent collection of standard equipment.

If you're shopping for a Sequoia of this generation, bear in mind that there were some notable changes during its production run. In 2005, the 4.7-liter V8 got a power bump to 282 hp and 325 lb-ft of torque and was coupled to a new five-speed automatic transmission. (It was later changed to 273 hp due to a revised rating method, with no impact on performance.) The '05 Sequoia also received an exterior freshening and two desirable new options packages, namely, the SR5's sport package and the Limited's luxury package, both of which included a height-adjustable rear suspension. Finally, '07 models were the first to come standard with front-seat side airbags and side curtain airbags.

In our reviews of the first-generation Toyota Sequoia, we praised its well-constructed interior, refined driving manner and smooth V8 engine, although in terms of outright power it fell short of class leaders. We also noted that its relatively narrow width made it feel somewhat less gigantic than competitors in tight spaces, although shoulder room was a bit compromised as a result. We didn't appreciate the 50/50 third-row seats, as they were a bit cozy for adults and couldn't be folded flat. On the whole, though, we liked this Sequoia model and would recommend it to used-car shoppers who want the versatility of a full-size SUV in a not-quite-full-size package.