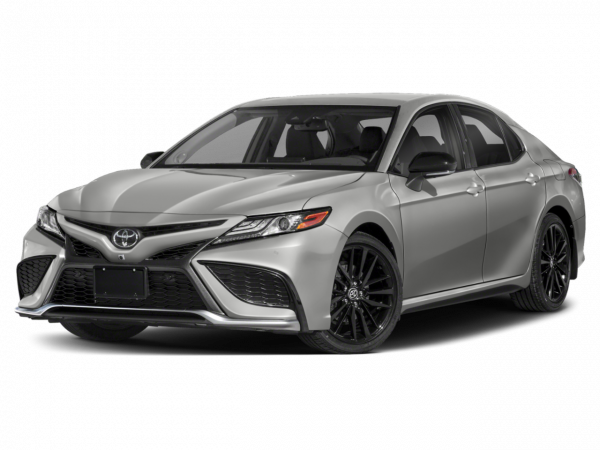 The Toyota Camry quietly debuted late in the 1983 model year, when Toyota replaced its old rear-wheel-drive Corona with the front-wheel-drive Camry, a car aimed specifically at the U.S. market. From these humble beginnings, the Camry would go on to dominate the midsize family sedan segment for virtually all of the next quarter-century, as consumers immediately embraced it for its high build quality, comfortable ride and impressive durability.

New or used, the Camry comes pretty highly recommended. As the Camry sells in such high numbers, finding one that matches your criteria should be pretty easy. It is worth noting that the family segment has improved greatly in more recent years. Many competing sedans have matched or outpaced the Camry in terms of quality and desirability, particularly in comparison to the sixth-generation model. The latest version of the Camry, however, has largely shored up the car's reputation as a go-to choice.

Current Toyota Camry
The five-passenger Toyota Camry is offered in L, LE, SE, SE Sport and XLE trim levels with a choice of two engines. The base 2.5-liter four-cylinder produces 178 horsepower and 170 pound-feet of torque, while the available (depending on trim) 3.5-liter V6 makes 268 hp and 248 lb-ft. A six-speed automatic is the only transmission offered, and sends power to the front wheels.

The Camry L's feature highlights include air-conditioning, a tilt-and-telescoping steering wheel, Bluetooth, a touchscreen display and a six-speaker sound system with a USB interface. Stepping up to the LE gets you a few more features, while the SE spices things up with a sport-tuned suspension and sporty styling treatments. The SE Sport features bigger wheels, a sunroof and a power driver seat. The luxurious XLE reverts to a softer suspension and adds a sunroof, dual-zone automatic climate control, power front seats and leather upholstery (V6). A premium audio system with a larger touchscreen and upgraded navigation system can be added to XLE models.

It should be noted that halfway into the 2014 model year, the Camry's standard equipment was revised. As such, the rearview camera became standard across the board, the upper trims picked up some enhanced audio features and the Entune name was expanded to cover all of the car's infotainment systems (not just the one with smartphone integration).

In reviews, we've praised this Toyota Camry's interior, which provides roomy seating, admirable outward visibility and well-placed controls. What the cabin design lacks in cohesiveness, it makes up for with generally good materials quality, especially the handsome stitching on the dash and door panels of upper trims. Toyota's Entune system is also praiseworthy in the way it easily adds enhanced audio, information and navigation features, although the touchscreen's virtual buttons can be a little frustrating to use at times.

Overall, this Camry provides the comfort and the quiet and smooth ride that should please a wide swath of midsize sedan shoppers. Power and fuel economy are excellent with either engine as well. The only major downside is the car's handling, which isn't as lively or engaging as that of other top family sedans, such as the Honda Accord or Nissan Altima.

Used Toyota Camry Models
The latest (seventh) generation Toyota Camry debuted for 2012 and has a number of significant improvements over the previous one. The interior is significantly nicer than before, and the four-cylinder engine is more powerful. Yet the car is still unmistakably a Camry, with a focus on pragmatic appeal and convenience. Changes since have been minimal. For 2014, the SE Sport trim level joined the lineup, while halfway through that model year saw some minor equipment shuffling that included the rearview camera becoming standard across the board.

The previous sixth-generation Camry was produced for the 2007-'11 model years. In reviews, we commented favorably about the Camry's spacious cabin, powerful and fuel-efficient optional V6, plush ride quality and top crash test scores. Unlike older Camrys, though, this one was let down by disappointing interior plastics, inconsistent fit and finish and uninspiring driving dynamics for non-SE models. It's a respectable choice for a used family sedan, but we thought more highly of competing models, such as the Ford Fusion and Nissan Altima.

For most of its production run, the Camry was offered in LE, SE and XLE trim levels. The entry-level model was labeled as the CE trim, but only for the first year. Base and LE models came fairly well equipped, while the SE brought with it a sport-tuned suspension. The softer-sprung XLE included items such as a premium sound system, dual-zone automatic climate control, a power passenger seat, reclining rear seats and leather upholstery (V6). Most of the features on the higher-trimmed models were offered on supporting trims as options. Other major options included a sunroof and a navigation system.

This Camry was offered with either a four- or six-cylinder engine, with improvements made over the years. The initial base engine was a 2.4-liter four-cylinder that produced 158 horsepower and 161 pound-feet of torque (slightly lower in California and other states). A five-speed manual or five-speed automatic was available, though four-cylinder XLEs were automatic only. The 3.5-liter V6 produced 268 hp and 248 lb-ft of torque and was paired to a six-speed automatic only.

In 2010, the base engine was increased to 2.5 liters and power output was boosted to 169 hp. The SE was further pushed to 179 hp. Both manual and automatic transmissions were also upgraded to six speeds. Other 2010 changes included a restyled grille and taillights, and standard stability control, satellite radio and Bluetooth for all models.

Previous to this was the fifth-generation car that was produced from 2002-'06. As expected, it was a comfortable sedan that offered a roomy cabin, a choice of inline-4 or V6 power and, depending on trim level and optional equipment, most of the latest safety features such as stability control and side curtain airbags. However, prior to 2005, the base Camry did not come standard with antilock brakes. As with other Camrys, we generally found this generation to be very good in terms of room, comfort and feature content.

Three engines were available for this generation. The first was a 2.4-liter four-cylinder that made 154 hp (145 with PZEV emissions controls). It was mated to either a five-speed manual or a five-speed automatic transmission (four-speed prior to '05) and should be powerful enough for the majority of buyers. A 3.0-liter V6 that generated 190 hp was also available (18 hp less prior to '04) on the LE and XLE trim levels, while a 210-hp, 3.3-liter V6 (introduced for 2004) was available on the SE model only. These six-cylinder Camrys came with the automatic only. In previous years, these power numbers were higher because of a change in measurement that occurred in 2006, although actual output never changed.

Like the more recent versions, the 1997-2001 Toyota Camry sedan offered a quiet, stress-free driving experience. Many desirable modern features were also available, including side airbags and antilock brakes (which became standard on all trim levels except the base CE). It, too, was offered with four- and six-cylinder powertrains.

Although a Camry older than 1997 is likely to have quite a few miles on it, it is still something to consider for folks on a tight budget. Provided it has been faithfully maintained, a 1992-'96 Camry (which was available in coupe, sedan and wagon body styles) should be able to spin its odometer to nearly 200,000 miles without major problems. It's this final trait, more than any other, that has kept the Toyota Camry popular with buyers over the last two decades.