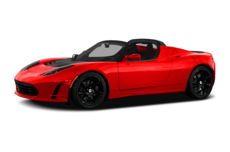 Although electric vehicles were more popular than their gas-fueled rivals during the infancy of the automobile in the early 1900s, they have been nothing more than an occasional curiosity in recent times. Although intriguing for their swift and silent, pollution-free operation, the handful of electric vehicles offered in more recent decades suffered from limited range (in the area of 50-80 miles) and often weird styling. With the 2008 Tesla Roadster, the electric car goes from an awkward wallflower to a stylish and seductive queen of the prom.

Loosely based on the platform of the sleek Lotus Elise sports car, the Tesla Roadster boasts agile handling and offers acceleration so rapid that the company claims a 0-60-mph time of 3.9 seconds. That means this electric car should out-sprint nearly any Ferrari, Porsche or Aston Martin, while traveling an estimated 220 miles without a drop of gasoline. Top speed, limited to 125 mph by the Roadster's one-speed transmission, isn't nearly as impressive. But unless you drive on the autobahn, that will be a non-issue. One thing that will be an issue, however, is the steep price of admission -- at roughly $100,000, the two-seat Roadster will never be more than a dream car for most enthusiasts.

The road to production hasn't been nearly as smooth as the Roadster's seamless and silent power delivery. Tesla had to push back the car's introduction a couple of times as various bugs cropped up that had to be worked out. The Roadster was initially fitted with a two-speed automatic, but that transmission proved incapable of handling the motor's prodigious torque output. (Electric motors make maximum torque right off the bat.) Subsequently, early two-speed production cars were equipped with 1st gear locked out to protect it from harm. When forced to start out in the taller 2nd gear, these cars could hit 60 mph in a significantly slower 5.7 seconds. Thankfully, later Roadsters came with a stouter one-speed unit capable of the type of acceleration promised by Tesla, while early cars could be retrofitted free of charge with the new one-speed unit.

Introduced for the 2008 model year, the Tesla Roadster looks more like an exotic sports car than an electric vehicle. Considering that this Tesla shares some components with the Lotus Elise, that's not surprising. Of course, there are major differences -- most notably the Tesla's electric powertrain, which sits amidships, and an even more rear-biased weight distribution at 35 percent front/65 rear. Also, at 2,690 pounds, the Tesla weighs 700 pounds more than the flyweight Elise. Spinning out 248 horsepower and 211 pound-feet of torque, the Roadster's three-phase, four-pole electric power plant can propel the Roadster from zero to 60 mph in a company-estimated 3.9 seconds. To put that into proper perspective, a Ferrari F430 Spider runs the same drill in around 4.5 ticks.

With its all-independent suspension, rearward weight bias and sport-tuned suspension with 16-inch front and 17-inch rear alloy wheels, the Tesla Roadster whips around corners as well as anything else claiming to be a sports car. Even with the substantial added weight of the battery pack, the Roadster feels light on its tires and eagerly turns into curves.

With no competition to speak of, the Tesla Roadster is truly a one-of-a-kind vehicle. Combining supercar performance (save for top speed) with pure electric propulsion, the Roadster allows the well-heeled, environmentally conscious enthusiast to get his kicks without feeling like, well, a heel.

Showing 1 through 2 of 2.00
Tesla Roadster Reviews By Year: