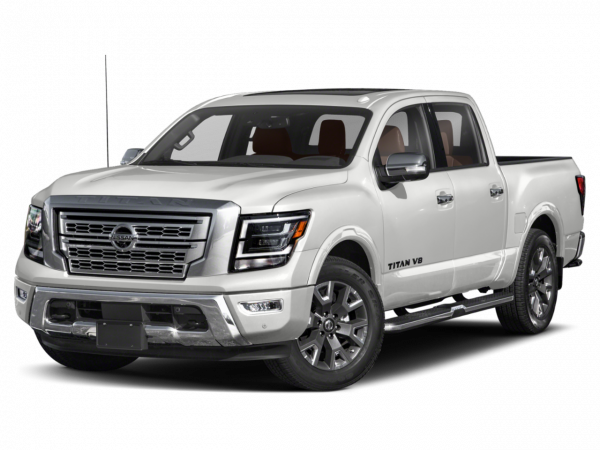 The Nissan Titan, introduced for 2004, was the first Japanese pickup to truly possess the attributes that buyers typically expect from a full-size truck. Manufactured at Nissan's Canton, Mississippi, plant, it boasts dimensions and capabilities that are very similar to those of domestic full-size pickups. Though it hasn't sold as well as its rivals and is now growing quite long in the tooth, a new or used Nissan Titan can still meet the basic needs of many truck shoppers.

Current Nissan Titan
The Nissan Titan is a full-size pickup truck. In terms of size, it's very similar to the trucks offered by domestic automakers, which means it provides competitive amounts of cargo and interior room. There's a fully boxed frame underneath for maximum rigidity and strength, as well as a traditional solid rear axle with leaf-spring support.

Nissan currently offers the Titan in extended-cab (King Cab) and crew-cab styles, with two bed lengths each. Buyers may also choose between standard- and long-wheelbase versions, with the latter adding 20 inches in length. The King Cab is offered with either a 6.5- or 8-foot bed, while those on the crew cab are each 1 foot shorter. The King Cab's rear-hinged doors open extra wide to aid cargo loading or a passenger's entry to the rear seats. The crew cab has four traditional doors and a larger rear seating area with more available rear legroom than the extended cab.

Each Nissan Titan body style is available in four trim levels. Similar to other Nissan products, there's the entry-level S, the midgrade SV, off-road-focused PRO-4X and the luxury-oriented SL. The S has a front bench seat, while captain's chairs with a flow-through console are standard on the other trims. Standard safety features now include stability control, front-seat side airbags and side curtain airbags. Notable options, depending on trim, include upgraded audio systems, a navigation system, a rear-seat DVD entertainment system and utility-enhancing cargo bed features. For those who anticipate pulling trailers, the SV Value Truck or SL Max Utility tow packages are also available.

The PRO-4X trim level adds equipment for serious off-roaders that include Rancho shocks, a lower final-drive ratio, skid plates, an electronic locking differential and 18-inch off-road wheels with aggressive off-road tires. Unique exterior and interior styling cues to differentiate the PRO-4X from the other Titan models are also included.

For power, Nissan offers only one combination: a 5.6-liter V8 connected to a five-speed automatic transmission. The V8 is rated at 317 horsepower and 385 pound-feet of torque. The transmission features a tow/haul mode for when the truck is used for pulling or carrying heavy loads. For every body style and trim combination, two- or four-wheel drive is available.

In Nissan Titan reviews, our editors have found it to be powerful and capable both on- and off-road. Downsides include a lack of additional powertrain choices and the absence of a heavy-duty model. The Titan has also been outclassed by newer competitors in terms of comfort and overall design. Still, we think Nissan's Titan is worth a look.

Used Nissan Titan Models
The current, first-generation Titan debuted for 2004, and these earlier trucks could be a good choice for a shopper searching for a used late-model pickup. The first couple of production years, in particular, outclassed domestic pickups in many ways. The most notable changes for the Nissan Titan came for the 2008 model year and included the addition of a long-wheelbase model, exterior and interior styling refreshes and new features. Models built for 2007 and earlier were available in one wheelbase length only, lacked the two different bed lengths for each body style and also had a reduced maximum payload.

It should be noted that stability control, side airbags and side curtain airbags were not standard on all Titans until 2010. Used shoppers should investigate whether the truck in question is equipped with them. Also, the current trim levels were introduced for the 2011 model year; previously, the Titan's three main trims were XE, SE and LE, though feature content was broadly comparable.