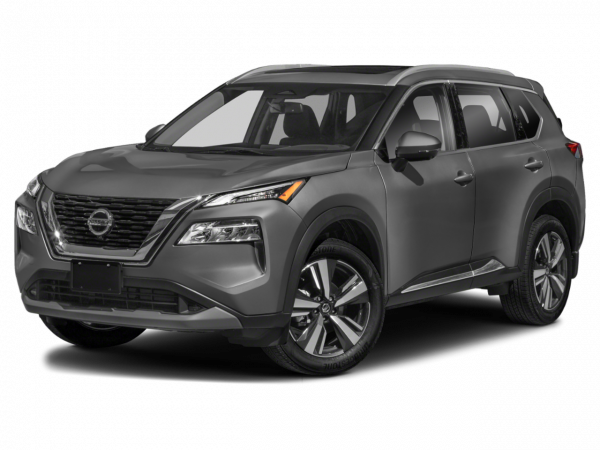 Like many of the two dozen or so compact crossovers on the market today, the Nissan Rogue seeks to provide the all-weather capability and commanding driving position of an SUV, along with the maneuverability and fuel efficiency of a typical car. It does this quite well, and it also adds bold, son-of-Murano styling to make it desirable for its form as well as its function.

Although the Nissan Rogue has never delivered an especially inspiring engine and transmission combination, performance has always been passable, and the current generation is notable for its stellar fuel economy. The second-generation Rogue also has a spacious interior with a large cargo hold and, rare for this class, an available third row of seating. Earlier Nissan Rogues weren't as roomy, but they were more nimble to drive through turns. Overall, we think a new or used Rogue presents a compelling overall package that merits consideration alongside traditional segment leaders.

Current Nissan Rogue
Completely redesigned for 2014, the current Nissan Rogue is a compact crossover SUV with seating for five or seven, depending on how it's equipped. Compared with the previous Rogue, it offers a much larger backseat, significantly more cargo capacity, higher fuel economy ratings and a longer list of safety features.

All Nissan Rogues are powered by a 2.5-liter four-cylinder engine producing 170 horsepower and 175 pound-feet of torque. A continuously variable transmission (CVT) is standard, and buyers have a choice between front-wheel-drive and all-wheel-drive configurations. With either drivetrain, fuel economy ratings are above average for this class.

Key options include a two-passenger third-row seat (S and SV models only), a power liftgate and a panoramic sunroof. Optional safety equipment includes a blind-spot warning system, a lane-departure warning system, a forward collision warning system and "moving object detection" (which works in conjunction with the multi-view parking cameras).

One thing we always liked about the original Nissan Rogue that has carried over to the second generation is the smooth ride quality. Neither the steering nor the handling is particularly sporty, but most buyers will appreciate the Rogue's relaxed demeanor. In reviews, we've found the Nissan's 2.5-liter engine adequate to the task of commuting. During harder acceleration, there's a noticeable growl from the engine as the CVT maintains a constant high engine rpm to provide the motivation needed for passing and merging. This makes for a noisier cabin environment than in some competitors.

Otherwise, the Rogue's cabin is a pretty nice place to be. Materials quality is high, and everything is put together with care. Nissan's available infotainment interface is quite easy to use as well. Seat comfort is excellent in the first two rows, and thanks to 9 inches of fore/aft adjustment, the 40/20/40 second-row seat is adult-friendly. The available third-row bench is a kids-only proposition, but the fact that Nissan offers one at all gives the Rogue a leg up on its rivals from Ford, Honda and Toyota.

Used Nissan Rogue Models
The first-generation Rogue debuted for the 2008 model year and was produced through 2013. After 2013, this Rogue continued on as the Nissan Rogue Select (reviewed separately), which is identical save for its abbreviated options list.

The original Nissan Rogue used the same 170-hp, 2.5-liter four-cylinder engine as the current model. All versions were offered in both front-wheel- and all-wheel-drive configurations, and a CVT was standard.

First-generation Nissan Rogues were available in two trim levels: S and SV (known as the SL from 2008-'10). You got the basics with the S, including keyless entry, air-conditioning and full power accessories, along with an iPod interface. However, things like privacy glass, a rearview camera, Bluetooth and satellite radio were available either within an option package or on the SV. Higher-end items like heated leather seats, a navigation system and a Bose sound system were available as options on the SV as well.

Like the current crossover, the first-generation Rogue offered a smooth, comfortable ride. Handling was actually a bit sportier than on the current version, while acceleration was fairly quick for a small four-cylinder crossover. However, engine noise was a persistent annoyance during passing maneuvers, as the CVT kept engine revs high to maximize the available power.

Styling is a subjective matter, of course, but to our eyes, the first-gen Rogue cut a rather dashing profile compared to its compact crossover brethren. Rear visibility consequently suffered, as did cargo capacity and rear-seat accommodations. Although this Rogue represents a good value as a used vehicle, shoppers needing room for child safety seats or a large dog will likely find it short on space.

Changes to the Nissan Rogue were minimal during this generation. It received minor styling updates for 2011, and trim levels and option packages were reshuffled over the years. For 2010-'11, the Rogue was offered in a Krom Edition model, which added larger wheels and cosmetic enhancements, including centrally located exhaust outlets.