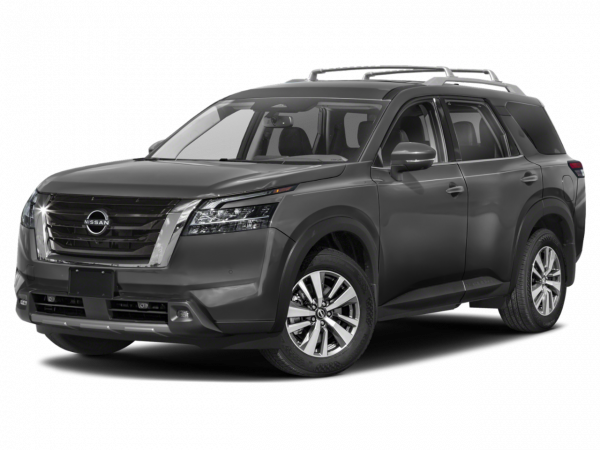 Once upon a time, somebody looked at a small, off-roading vehicle like the Nissan Pathfinder and said to himself: "You know, I think I could use that to replace the family station wagon. It's a lot cooler looking than dad's Country Squire. And I wouldn't be caught dead in a minivan." Since then, the Pathfinder and other SUVs have become increasingly larger and luxurious to meet the demand of millions of like-minded buyers.

You can see this evolution in the Pathfinder's timeline of four generations. The carlike current model excels as a three-row family hauler, and it's even available as a hybrid. Earlier Pathfinders -- and the third generation in particular -- were more rugged and capable for towing, but not as comfortable or fuel efficient.

Current Nissan Pathfinder
The Nissan Pathfinder is a three-row crossover SUV that's offered in S, SV, SL and Platinum trim levels. The base S trim is indeed pretty basic for this segment, so we think most people will be better served by the SV, which includes items like a power driver seat, Bluetooth, a rearview camera and an iPod interface. The two upper trims can be had with nearly all of the luxuries found on the mechanically related Infiniti JX35. Note that the Hybrid is not offered in S trim.

Powering the standard Pathfinder is a 3.5-liter V6 engine that sends 260 horsepower and 240 pound-feet of torque to the front wheels through a CVT (continuously variable transmission). The Pathfinder Hybrid pairs a supercharged 2.5-liter four-cylinder engine with a 15-kilowatt electric motor, yielding a combined 250 hp and 243 lb-ft. All-wheel drive is optional with either powertrain. Hybrid fuel economy is estimated to exceed 25 mpg in mixed driving, while the regular Pathfinder stays in the low 20s.

In daily driving, the Pathfinder's ride is laudably comfortable and composed. If you're looking for agile handling, this Nissan may disappoint, but otherwise it's about as pleasant to drive as a big crossover can be. Performance is smooth and more than adequate with the V6, and the Hybrid promises meaningful efficiency gains without giving up too much acceleration.

Inside, the Pathfinder's cabin is put together well and boasts quality materials. Despite the abundance of features (especially in higher trims), the various controls are easy to reach and intuitive. The second-row seat slides and reclines to optimize comfort for passengers or cargo space behind as needs dictate. Access to the third row is eased by the second row's tilt and slide feature, which can be used even when a child seat is in place. The third row offers enough headroom for 6-foot passengers, but clearance gets a little tight beyond that, and legroom is limited.

If maximum space is a priority, some larger crossover SUVs such as the Chevrolet Traverse might be a better choice. But overall we're fond of the Pathfinder and think it fits very well with the typical family's needs and desires.

Used Nissan Pathfinder Models
The current, fourth-generation Nissan Pathfinder was completely redesigned for 2013 and represents a dramatic shift from its predecessor. The Pathfinder is now a car-based crossover SUV, boasting a more space-efficient cabin, better fuel economy, front- or all-wheel drive, V6 or hybrid power and a CVT. As a result, it is better to drive, cheaper to fill up and generally nicer to live with.

The most notable change for the current Pathfinder has been the introduction of the Hybrid model for 2014.

The previous, third-generation Nissan Pathfinder was produced from 2005-'12. Unlike its unibody predecessor and successor, this Pathfinder featured truck-based body-on-frame construction that lent it a commendably strong 7,000-pound towing capacity when properly equipped. However, it also made it heavier, less space-efficient inside and ponderous to drive.

Originally, the standard engine was a 4.0-liter V6 that produced 266 hp and 288 lb-ft of torque. For 2008, a 5.6-liter V8 became an option, making 310 hp and 380 lb-ft of torque that was more up to the task of lugging this heavy Pathfinder around. Both engines came standard with a five-speed automatic transmission and rear-wheel drive, while a four-wheel-drive system was an option. As expected, fuel economy was not a strong suit for either engine.

The interior was roomy enough for four adults in the first two rows, but only little kids could fit in the third row. On the upside, most of Nissan's comfort and convenience features were offered, and its maximum cargo capacity of 79 cubic feet should still be enough for most folks.

Pathfinder buyers of this generation typically had a choice of four trim levels: base S, midgrade SV, the more luxurious Silver and the upscale LE. For those interested in using a Pathfinder for some off-roading, Nissan offered an SE Off Road 4x4 trim from 2005-'10 that featured such all-terrain items as special tires, Bilstein shocks, skid plates, hill descent control and hill start assist.

If you're looking at this generation Pathfinder, know that its strengths relate mostly to its power and towing capacity. For more typical family use, competing crossovers or SUVs of similar vintage will likely be better choices, including the Honda Pilot, Mazda CX-9 or Toyota Highlander or 4Runner.

The second-generation (1996-2004) Pathfinder debuted right when the SUV craze hit a fever pitch. A switch to carlike unibody construction (compared to the original truck-based model) afforded it significant gains in size, interior space and on-road agility, while shedding 200 pounds. The softer Pathfinder's unremarkable styling and wimpy engine (its V6 made just 166 hp) rendered it merely average within its crowded segment, though. A small backseat also made it less suitable for hauling children than some competitors.

Nissan followed a cosmetic update in 2000 with a much-needed engine upgrade in the form of its powerful VQ-series 3.5-liter V6. In the Pathfinder, it was good for an impressive 240 hp and 260 lb-ft of torque. The improvements added enough flavor to earn the Nissan Pathfinder two consecutive Edmunds.com Most Wanted awards, in 2001 and 2002.

Launched in 1986 for the 1987 model year, the original Nissan Pathfinder has roots that run deeper than most midsize SUVs. Initially, the Pathfinder was intended to appeal to the same youthful, active, mostly male buyers that Toyota appealed to with its 4Runner. Based on Nissan's compact pickup platform, the original Pathfinder looked macho and performed well off road, even though it was not terribly well equipped or spacious by today's standards. It wasn't very powerful either, even with the optional 3.0-liter V6. It was offered initially only in a two-door body style, later adding a four-door variant that ultimately became its only configuration in subsequent generations. Pathfinders were available with four- and six-cylinder engines, as well as rear- and four-wheel drive.