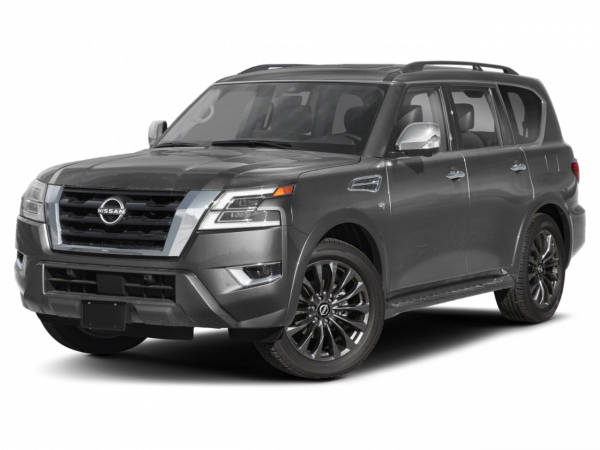 The word "armada" usually refers to a group of large moving things. It's a fitting name for Nissan's entry in the large SUV segment, because pretty much every aspect of this beast is size L or XL. The Nissan Armada's standard 5.6-liter V8, for example, enables you to tow trailers and campers with ease. And then there's the large number of cubic feet in the Armada's cabin -- this is a very spacious SUV that's also loaded with storage areas.

The downsides are typical for this segment. Fuel mileage is poor, and the Armada's supersized dimensions can turn parking into a frustrating ordeal. If brute force isn't a top priority for you, we'd recommend looking at three-row crossover SUVs, which offer superior fuel economy and maneuverability. But if you need a rig that hauls like a gorilla on steroids, the Armada's got you covered.

Current Nissan Armada
The Nissan Armada is a full-size SUV that seats up to eight passengers in its three standard rows. Buyers can choose from three trim levels: SV, SL and Platinum.

All Armadas are equipped with a five-speed automatic transmission and a 5.6-liter V8 that cranks out 317 horsepower and 385 pound-feet of torque. Rear-wheel drive is the default, with four-wheel drive (including low-range gearing) optional across the board. The Armada's tow rating is a healthy 9,100 pounds, although those 317 horses make for a modest herd by modern V8 standards. Not surprisingly, they're also thirsty -- overall fuel economy maxes out at around 15 mpg.

The Armada's cabin is quite classy, with intuitive controls that are familiar from vehicles throughout the Nissan/Infiniti family. Head- and legroom are excellent in the first two seating rows. The third row offers high, stadium-style seating with adequate legroom, but short seat bottoms make this row one for the kids. Storage space is plentiful, with a generous supply of handy bins and nooks.

In our reviews, we've noted that the Nissan Armada's V8 provides brisk acceleration, but the truck's heft quickly reveals itself in cornering maneuvers and braking. Still, the Armada offers a smooth ride and a pleasant driving experience, both on the highway and around town.

Used Nissan Armada Models
The current-generation Armada debuted for the 2004 model year. It was initially named the Pathfinder Armada, but Nissan dropped the Pathfinder connection for the Armada's second year of production. There were two primary trim levels: SE and LE. The SE Off-Road package, offered from 2004-06, toughened things up with features like skid plates, a lower final-drive ratio and all-terrain tires.

The 2008 model year saw minor exterior changes and a major interior overhaul; prior to that, the Armada's dash resembled a silver plastic boom box. New technology features like keyless ignition, Bluetooth and a hard-drive-based navigation system also appeared for '08. The LE trim level was supplanted by the Titanium and Platinum trims for 2010, while the SE received standard front side airbags.

The current trim level trio -- SV, SL and Platinum -- arrived for the 2011 model year. The SL upgraded to a standard power liftgate for 2012, while the Platinum's entertainment system received standard dual 7-inch monitors for 2013.