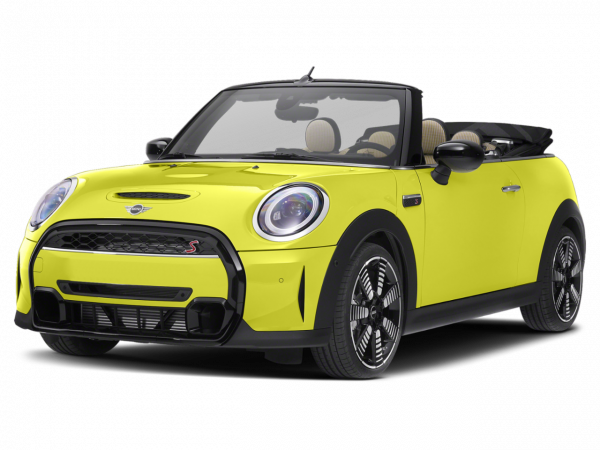 In 1959, a groundbreaking new, boxy subcompact coupe emerged in England using a transverse-mounted engine and a space efficient front-wheel-drive layout. Within its tiny footprint it provided a surprising amount of usable space for people and packages. Because it was affordable, stylish, fun to drive and easy to park anywhere, the British Mini and sportier Mini Cooper quickly achieved icon status around the world -- including the U.S., where it sold as a brief counter-culture favorite during the 1960s.

After a lengthy break, the Mini Cooper returned to our shores in 2002 under BMW's direction to resurrect the legend. Through the course of three generations, new Minis have provided a uniquely sporting blend of classic British mini-car heritage and charm with precise German engineering and construction. New or used, however, you will find that a Cooper's price can rise very quickly if it has a lot of optional equipment installed. Then again, that abundance of available features is what makes a Mini a Mini. It's a pleasant dilemma to be faced with as no matter how you equip one, a Cooper hatchback or convertible is one of the most satisfying and fun subcompacts for the price.

Current Mini Cooper
The front-wheel-drive Mini Cooper is available in two-door hatchback and convertible body styles, both of which seat four people. The 2014 model year marks a fully redesigned, third generation of the hatchback. It's slightly larger and roomier than before and also features a pair of new engines. The convertible lags behind and is essentially carried over from last year.

The Cooper convertible, being of the previous generation, has a 121-hp, 1.6-liter four-cylinder engine. The Cooper S convertible comes with a turbocharged 1.6-liter rated at 181 hp. There's also a John Cooper Works convertible with a higher-performance version of the turbo 1.6-liter producing 208 hp. Transmission choices are the same as for the hatchback. Fuel economy is worse with the base engine, but about the same with the S.

The Mini Cooper manages to please a wide variety of drivers, from penny-wise to thrill-seeking. Thanks to its two body styles, comprehensive options and bold interior and exterior design options, there is a seemingly infinite combination of personalized Minis. Each model -- Cooper, Cooper S and John Cooper Works (JCW) --- is essentially defined by the engine that powers it and the size of its wheels. However, slight variations in equipment exist.

All Mini Cooper hatchbacks are equipped with air-conditioning, Bluetooth phone and audio connectivity and iPod integration. The S hatchback is further outfitted with a more powerful engine, larger wheels, foglights and sport seats. There is an abundance of options that vary according to body style and trim level, but include various wheels, sport-tuned and/or adjustable suspension, a rearview camera, an automated parking system, a dual-pane sunroof, parking sensors, cloth or leather upholstery, a navigation system, smartphone app integration, automatic climate control, heated front seats, keyless ignition and entry and a premium Harman Kardon audio system.

In reviews of the redesigned Mini Cooper and Cooper S hatchbacks, we found the model's larger and more sensibly designed interior to be a noticeable improvement. Though its rear seat is still small, occupants gain almost an inch of legroom and a full 3 inches of shoulder room. Luggage and cargo room also grow noticeably. As before, the hatchback has an engaging personality thanks to its nimble handling and quick performance. The trade-off is still a firm ride and occasionally raucous cabin environment, but overall, the essential elements that gave the Mini its mojo from the get-go are still present and well accounted for.

The yet-to-evolve Cooper convertibles are still worthwhile for all the reasons we liked them in the first place: distinctive styling, peppy performance and the remarkably useful "sunroof in a convertible" full-power soft top. Also, the convertible is the only way to get the most powerful John Cooper Works engine in 2014. On the other hand, the drop top retains the traditional, pie-sized center-mounted speedometer and less sensible control layout. The backseat is also very small and rearward visibility is poor.

Used Mini Cooper Models
The Mini Cooper hatchback's second generation spanned from model year 2007-'13. For the Cooper convertible, Mini offered it starting in 2009 up to the present. This second-generation hatchback and convertible were available as a base Cooper, turbocharged Cooper S and, starting for 2009, the high-output turbocharged Cooper John Cooper Works (JCW).

The goal in this redesign was an evolutionary one, as befitting an icon. Though scarcely looking different from the first-generation model, the Mini Cooper's mechanicals were updated and many shortcomings were addressed. Notably, the ride was improved, build quality strengthened, cabin noise quelled, the steering effort at low speeds was lightened and all-new engines boasted more refinement and much better fuel economy.

Originally, the Cooper came with a 1.6-liter four-cylinder that produced 118 hp. The Cooper S featured a turbocharged version of the same engine that produced 172 hp. JCW versions were rated at 208 hp. For 2011, the base Cooper's output rose to 121 hp and the turbocharged S to 181 hp. A six-speed manual transmission was standard and a six-speed automatic was available (except on the JCW until 2013).

Naturally, a wealth of optional features were available. Highlights included adaptive xenon headlights, automatic climate control, heated front seats, keyless ignition and entry, a Harman Kardon surround-sound audio system, Bluetooth phone connectivity and an iPod interface. Other options include different wheels, parking sensors, cloth or leather upholstery, a navigation system and a multitude of different interior trims and materials. As has been the case since the Cooper's debut, a multitude of dealer-installed features were additionally available.

In reviews of the time, we praised this Mini's spirited handling, thrifty fuel economy and excellent all-around performance in the Cooper S and JCW versions. Even the base Cooper, though, was still fun to drive. Downsides included a stiff and noisy ride, the car's very small backseat and illogical control layouts. The optional navigation system in particular wasn't especially user-friendly and hampered audio control.

There were other changes throughout this generation that shoppers of used Minis should be aware of. Bluetooth connection wasn't made standard across the line until 2013, but was optional from 2008 on. Prior to 2010, cruise control and a multi-function steering wheel were optional. And for 2007 and '08, stability control was an option. Should you see the names "Mini Camden" or "Mini Mayfair" in a used ad, these were a pair of special editions for 2010 that packaged some popular options with unique trim pieces, colors and a kitschy "Mission Control" system that featured a cast of in-car voices that responded to certain vehicle functions.

Prior to all of this, Mini sold the first generation of the modern Mini Cooper hatchback from 2002-'06. If you're looking for a Cooper Convertible from this era, they were sold from 2005-'08, while a 207-hp John Cooper Works edition arrived for 2005.

Those interested in this generation should be aware of some of the key differences between it and the current car. For starters, the standard Cooper had just 115 hp and wasn't refined so we wouldn't recommend it if you can avoid it. Secondly, Cooper S models were then supercharged (rather than today's turbocharged cars) and we'd recommend these, as they weighed in with a more forceful 163 ponies (or 168 for '05 on). Transmissions are also important to note. The Cooper came standard with a five-speed manual, while an optional continuously variable automatic did the car no favors. The Cooper S came standard with a six-speed manual, and starting in '05, a six-speed automatic with paddle shifters was optional.

Expect lively handling from either model, but be aware that the suspension setup of the Cooper S -- though enthusiasts will love it -- is even stiffer than the current model's. We would avoid those cars with wheels bigger than 16 inches. This Cooper also had much stiffer steering at slower speeds, but many have found it far more communicative and indicative of a go-kart than the current electric power steering.

Inside, this Cooper's various controls were much simpler and easier to use, but the cabin wasn't screwed together well -- almost every car suffers from frequent squeaks and rattles. While taller drivers will find plenty of leg room, there was no telescoping steering wheel available. The seats were also less comfortable.

Detail improvements and color changes carried the Mini Cooper through its first few years, so even early examples look up to date and can make particularly fine used car values. To keep things fresh and perky in 2005, Mini updated the Cooper's front and rear fascias, though it wasn't so significant that many should notice or care. More important to note are the addition of features for '04, like a more comfortable three-spoke steering wheel (versus the more classic two-spoke) and a digital speedometer mounted in the tachometer.