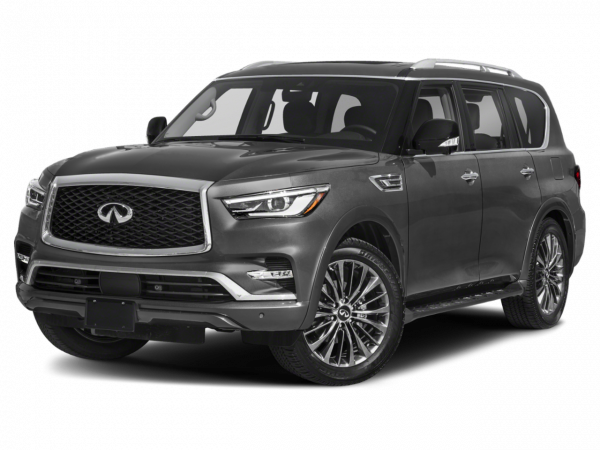 Standing as an example of the "bigger is better" philosophy, the Infiniti QX80 is a worthy competitor in the full-size luxury SUV arena that boasts a powerful V8 engine and above-average towing capabilities. Off-road prowess, on the other hand, is not a strong point, as the QX80 is geared more for urban recreation or pulling a boat to the river. In those situations, the QX80 manages quite well, providing its driver and passengers with a comfortable cabin and myriad high-tech features.

As the QX80 was designed to be more of a versatile and foul-weather-capable luxury transporter than a wilderness tamer, rugged outdoorsmen may want to look elsewhere. But those seeking a well-appointed luxury SUV should be well served by the brawny Infiniti QX80.

Current Infiniti QX80 Models
Although officially introduced for 2014, the Infiniti QX80 is essentially the previous QX56 with a new name. This full-size luxury SUV seats seven or eight passengers depending on whether it was equipped with the standard second-row captain's chairs or the optional 60/40 split-folding bench seat.

It comes loaded with a wealth of standard features like 20-inch wheels, xenon headlights, tri-zone automatic climate control, a top-view camera system, a power-folding third-row bench seat and a 13-speaker Bose audio system. Optional highlights include an actively adjustable suspension system, a twin-screen rear entertainment system, ventilated front seats, adaptive cruise control and a host of high-tech safety features designed to either prevent a crash or protect the occupants in the event of one. Plus, despite its many infotainment features, Infiniti's excellent electronics interface makes controlling them easy.

A 5.6-liter V8 with 400 horsepower and 413 pound-feet of torque powers the QX80. A seven-speed automatic is the only transmission offered and features manual shift control with rev-matched downshifts. Rear-wheel drive is standard, with four-wheel drive optional. Properly equipped, the QX80 can tow an impressive 8,500 pounds and is aided by a tow/haul mode for the transmission as well as an automatic-leveling rear suspension.

In reviews, we've found this QX80 to be a pretty impressive luxury SUV, with the large collection of features and potent V8 being the main draws. Downsides include cramped third-row seating and a ride quality that's not as smooth as what's provided by competing models.

Used Infiniti QX80 Models
Used car shoppers should know that Infiniti's large SUV has had (including the current iteration) no fewer than three monikers, so information about older models can be found in our QX and QX56 reviews.