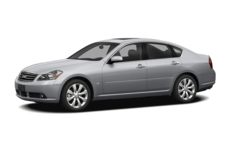 Though high-end vehicles now come in more shapes and sizes than ever, the midsize luxury sedan segment remains the heart of the luxury automobile market. Nissan's luxury division, Infiniti, has been around since 1990, yet it had no real presence in this key segment until 2003, when the V8-powered, rear-wheel-drive M45 was launched. Although it offered a credible amount of luxury and performance, the original M45's relatively uninspired design and cramped interior kept it from registering anything more than a faint blip on luxury buyers' radar screens.

The last iteration of the Infiniti M45, however, enjoyed wide critical acclaim. With substantially more space, a tremendous amount of technology and comfort features, and a bold, imposing exterior design, the last M45 was a high-tech powerhouse with plenty to offer midsize luxury car shoppers. Its performance capabilities were raised significantly due to things like available four-wheel steering, a precisely tuned suspension and strong brakes. Even though the V6-powered M35 represented a significantly better value and offered potent performance, the current M45 was a swift, stylish, superbly executed luxury sedan that should be considered with the contemporary top players in the segment.

The most recent generation of the Infiniti M45 was produced from 2006 to 2010. First-year models were listed as having 335 horsepower, with subsequent models rated at 325 hp. This was due to a change in horsepower measurement rather than actual output and thus, performance was unaffected. The M45's five-speed automatic transmission had manual-shift control and a sporty rev-matching feature that imparted a particularly lively feel to downshifts.

Originally, there were two trim levels: base and Sport. Even the base car included such items as leather upholstery, driver memory functions and dual-zone automatic climate control. Stepping up to the Sport netted you 19-inch wheels, a sport-tuned suspension, active rear steering and adaptive xenon headlights. Options included such high-tech fare as navigation adaptive cruise control, lane-departure warning system and a surround sound system.

For '08, the mildly face-lifted M45 gained the option of all-wheel drive and its M45x AWD trim level. The Sport trim was also replaced that year in favor of an optional Sport package on rear-drive base models, while the navigation system was given a welcome overhaul that included a hard drive and digital music storage. It remained unchanged before making way for the redesigned M56.

The Infiniti M45's interior was well appointed and well built, with firm seats that were highly adjustable, comfortable and heavily bolstered. However, the competition in this segment was pretty intense and the M35 wasn't quite as elegant and thoughtfully engineered as some of its rivals. The quality of materials was a bit uneven, and we found that the layout of the center stack controls wasn't as clean and intuitive as it could be.

In road test reviews, editors praised the Infiniti M45 for its explosive power, sharp handling and its bounty of luxury features. Criticisms of the M45 included overly intrusive road noise and complicated center-stack controls that were hard to master. Also, we questioned the logic of buying the thirstier V8, when the M35's V6 provided nearly as much power.

The first-generation Infiniti M45 was sold for 2003 and '04 -- there was no 2005 model -- and was basically a Japanese-market Nissan Cedric luxury sedan brought over to fill the gap between Infiniti's near-luxury G35 and the larger, technology-laden Q45. Engineered for the narrow streets of Japan, the M45's cabin proved too narrow to hold corn-fed Americans comfortably, and the backseat was scant on legroom for a car of its size. Even worse, the M's exterior design was bland to a fault.

However, it was fast. The original M45 was available only with a 340-hp V8 and rear-wheel drive. Combined with big 18-inch wheels and performance tires, the M45 delivered respectable handling. Equally important, the original M45 was equipped with nearly the same number of safety features as today's model.

Cheaply priced and available with most of the luxury features found on the larger Q45, first-generation M45s generally represent strong used-car values in terms of feature content and performance. For shoppers who like the car's combination of stealthy speed and luxury, and don't need a lot in the way of interior room, the first-generation Infiniti M45 could be a good match.