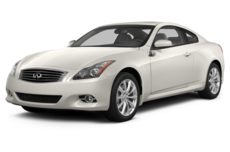 Nissan launched its upscale Infiniti division in 1989 with two unique models and a polarizing ad campaign. More than two decades later, Infiniti continues to blaze its own trail in pursuit of luxury, performance and style. The Infiniti G37 sport coupe, sedan and convertible are prime examples of this corporate philosophy. Blessed with a split personality, the rear-wheel-drive G37 will deliver you to work in luxury during the week and then clip apexes all weekend without breaking a sweat.

The list of luxury sport coupes and sedans is typically dominated by elite Teutonic nameplates. In readying the G37, Infiniti honed it on test circuits throughout Europe, including Germany's famed Nürburgring. This athletic chassis, along with the G's attractive sticker price, distinctive interior appointments and ample array of technology, makes it well prepared for battle in this class.

Used Infiniti G37 Models
The Infiniti G37 was first introduced as a coupe for 2008, with the convertible arriving the following year. Technically, the G37 sedan arrived for 2009 as well, but it was really the same vehicle as the second-generation G35 sedan that arrived for '07, albeit with a larger 3.7-liter V6. Confused yet? It gets worse. For 2011, Infiniti officially broke these cars apart into separate models, so for information on a new G, please read the Infiniti G Sedan review, Infiniti G Coupe review and Infiniti G Convertible review.

Used Infiniti G37 models are available in coupe, sedan or convertible body styles, with four possible trim levels: base, Journey, G37x and Sport 6MT. The convertible was only offered in base or Sport 6MT trim, though. For 2010, a special range-topping Anniversary model added features that included navigation, an upgraded Bose audio system, iPod connectivity and ventilated seats (for the convertible only).

In addition to the long list of standard features packaged with each trim level, several options, including the Anniversary add-ons were available &agrave; la carte. Adaptive cruise control will alleviate some fatigue on long trips, while the available Sport package (standard on the G37 Sport 6MT and optional on the G37 Journey) will rouse the interest of more aggressive drivers thanks to features like a limited-slip differential, a sport-tuned suspension and brakes, sport seats and bigger wheels.

A four-wheel active steer system (4WAS) was available for those obsessed with pushing the technological envelope, but reactions were mixed, with several drivers noting diminished steering feedback in vehicles equipped with 4WAS. It was eliminated after 2009. Stability control, front-seat side airbags and side curtain airbags can be found on all used Infiniti G37s, and a pre-collision preparation feature was optional.

During these years, the G37's 3.7-liter V6 produced a very healthy 330 horsepower and 270 pound-feet of torque, fed to either the rear wheels or all four (G37x). In base, Journey and G37x trims, the G37 came with a seven-speed automatic transmission featuring paddle shifters, while the Sport 6MT featured a six-speed manual. Both transmissions have their devotees, but the clutch take-up in the manual is a little too abrupt. Acceleration and mileage numbers are comparable between the automatic and manual, so the choice is a matter of personal preference.

A used G37 from these years offered user-friendly controls, excellent build quality and a handsome design -- the latter highlighted by such items as the car's leather-accented magnesium transmission paddle shifters and attractive interior trim. The front seats are comfortable and well-bolstered, and the available sport-styled seats offer even more aggressive bolstering, though they may be a bit too snug for larger drivers. Both the sedan and coupe feel like sports cars wrapped in a luxury car package, but the coupe, with seats that are mounted slightly lower than the sedan's, feels a bit racier. We're less enamored with the convertible, as it's less refined and practical than its competitors from those years.

Overall, the Infiniti G37 stands shoulder to shoulder with all its contemporary rivals in the entry-level luxury segment. Used car consumers in the market for such a vehicle would be wise to put it at the top of their to-drive list.