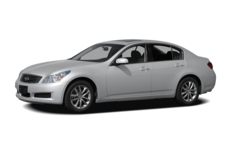 These days, we've come to expect a lot from Infiniti. But in years past, the Japanese luxury brand actually struggled to find an audience. Only with the Infiniti G35 sport sedan did the company start to regain its footing after years in the red. At the time of its debut, the G35's refined styling and sporty performance made a loud statement.

There were two generations of the Infiniti G35, both built on the same platform as the Nissan 350Z sports car. The G35 distinguished itself in the entry-level luxury segment with a roomy cabin, plenty of performance and a respectable price. For those reasons, the rear-wheel-drive G35 was one of our editors' top recommendations for a sport sedan or coupe that was rewarding to own and drive. More recently, the G35 was replaced by the G37.

There were two generations of the Infiniti G35 sedan, although the second generation is essentially the current G37 sedan with a smaller V6 engine. The G35 coupe lasted only one generation (meaning, same body style) before being replaced by the fully redesigned G37 coupe.

The most recent G35 sedan was completely redesigned for 2007. Changes included a stiffer body structure, revised chassis tuning for better handling, a more powerful V6 engine and a more voluptuous take on the previous G's styling. It was more or less the same size as the outgoing model, but the biggest improvement could be found inside, both ergonomically and aesthetically. Everything was better put together and materials were higher in quality. The 3.5-liter V6 engine produced 306 horsepower and 268 pound-feet of torque. A five-speed automatic transmission with paddle shifters was standard, but a six-speed manual came with the 6MT trim. We'd seriously recommend against this transmission (especially on 2007 models) as it was incredibly difficult to drive smoothly.

The sedan was available in five trims: a base model, Journey, x (indicated all-wheel drive), Sport and Sport 6MT. Most Infiniti G35 sedans will be of the Journey variety, which added items like dual-zone automatic climate control and a six-CD changer. The Sport trims were geared toward enthusiasts and featured 18-inch wheels and tires, a limited-slip differential, sport seats and aggressive tuning for the car's electronic stability system. A four-wheel active steering system was an option that's exclusive to the Sport trims, although we weren't fans of it.

Other than its engine, its name and few other detail changes, the G35 sedan became the G37 sedan for 2009.

The original Infiniti G35 was introduced for 2003, and was produced in sedan form until 2006 and as a coupe until 2007. Originally, the sedan was available in one trim level until the all-wheel-drive model arrived for '04. The coupe could be had in base or Sport trim. The latter included a firmer suspension, a limited-slip differential and 19-inch alloy wheels.

Both sedan and coupe shared the same 3.5-liter V6, but the sedan originally made less power (260 hp with four doors, 280 with two doors). They were made even at 280 hp for 2005, and both models when equipped with the six-speed manual option got a boost to 298 hp. These horsepower numbers dropped to 293 and 275, respectively, for the '07 coupe because of a change in SAE testing procedures -- actual output did not, in fact, change.

Other than the myriad engine changes, there were other noteworthy updates made during the first-generation G35's lifetime. The sedan received a new hood, grille, bumpers, side sills and taillights for '05, although it was hardly a revolutionary aesthetic difference. The coupe remained mostly unchanged visually. Inside, though, both benefited from a redesigned instrument panel and improved manual transmission with a lower shifting effort. The coupe gained an optional rear-steer system for 2006, while its Sport Package gained a unique front fascia and a big rear spoiler. Bluetooth arrived on all Gs that year. While the G35 sedan was completely redesigned for '07, the coupe remained the same.

In our reviews, we were quite fond of the original generation Infiniti G35. The sedan was a bargain-priced alternative to the BMW 3 Series, while being a little less frantic and more comfortable than the second-generation G35 and current G37. The coupe was the more practical, livable alternative to Nissan's 350Z -- it was a sports car in luxury clothing. If there was one area of concern, it was an interior filled with several cheap surfaces and some unintuitive controls. Headroom was also quite limited in the coupe. One feature that was welcome, though, was the optional reclining rear seatbacks in the G35 sedan, which made it a top choice for backseat comfort.