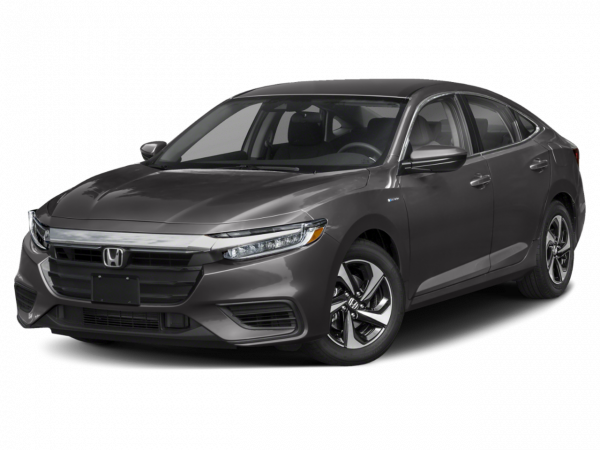 When the Honda Insight two-door hybrid-powered hatchback first arrived on American shores, few people knew what to make of it. Dwarfed by the day's massive SUVs, this two-seater's oddball styling made it look as if it came off the set of a futuristic movie. Little did we know that it really was the car of the future -- thanks to the volatility of gas prices in the following years, hybrids soon became prized for their superior fuel economy. However, while the original Insight was remarkably fuel-efficient, it ultimately lacked the practicality found both in "real cars" and Toyota's four-door Prius.

Years later, Honda revived the Insight name, determined to rectify the original Insight's shortcomings. Like the first Insight, the current-generation model combines a small gas engine with an electric motor that's powered by a battery pack. The current powertrain falls short of its predecessor's impressive 60-plus-mpg potential on the highway, but the second-generation Insight is a superior car in all other respects. Its convenient four-door hatchback design provides decent cargo space and a tight but usable rear seat, and it still returns around 40 mpg combined. Compared to other modern hybrids like the Ford C-Max and Toyota Prius, however, the latest Insight comes up short in fuel economy, features and overall refinement.

Current Honda Insight
The latest Honda Insight, a four-door hybrid hatchback with seating for five, is available in base, LX and uplevel EX trim. Standard equipment for the base model includes 15-inch steel wheels, antilock brakes, stability control, automatic climate control and a two-speaker sound system. The LX adds cruise control, four speakers for the sound system and an iPod/USB audio interface. The EX comes with 15-inch alloy wheels, heated mirrors, steering-wheel audio controls and six speakers. The EX can also be equipped with a navigation system (that includes a rearview camera) and Bluetooth.

Under the Insight's hood is Honda's familiar Integrated Motor Assist (IMA) hybrid system. IMA starts with a 1.3-liter four-cylinder gasoline engine that produces 88 horsepower and 88 pound-feet of torque that's supplemented by an electric motor that kicks in when needed to add another 13 hp and 58 lb-ft. A nickel-metal hydride battery pack keeps the electric motor whirring, and regenerative braking helps keep the battery pack charged. A continuously variable transmission (CVT) directs the power plant's output to the Insight's front wheels.

In reviews, we've found that the current Honda Insight delivers on the promise of miserly fuel economy. However, that fuel economy is still below what rivals like the C-Max and Prius achieve. Other downsides to the Insight include an unsophisticated ride, mediocre rear seat room and elevated amounts of road noise.

Used Honda Insight Models
When the current second-generation Insight debuted in 2010, it was only offered in LX and EX trim levels. The base trim was added the following year. Notable updates occurred for 2012 and included refreshed front and rear styling, more sound insulation, a bit more rear seat headroom (via a reconfigured rear seat), a redesigned gauge cluster and an updated navigation system (with rearview camera). Since then the Insight has been unchanged.

The first-generation Honda Insight was produced from 2000-'06. It was powered by a 1.0-liter inline three-cylinder engine that put out 67 hp. A lightweight electric motor supported the gas engine with low-end torque and provided extra power under acceleration. Combined, the IMA hybrid system was rated at 73 hp and 91 lb-ft of torque when coupled to the five-speed manual transmission. The optional CVT dropped these figures a bit.

Available in just one trim, the Insight came standard with full power accessories and a CD player. Automatic climate control (with air-conditioning) was optional, and many Insights had a dealer-installed CD changer in the hatch area.

In reviews, we found that the original Honda Insight wasn't very practical as a daily driver. It had a small cargo area, a paltry 365-pound payload capacity, a battery pack that drained fairly easily and rather pokey acceleration. The first Insight was also plagued by excessive road noise at highway speeds, and its ride was uncomfortably stiff. With regard to maximum fuel efficiency, though, the original Insight certainly delivered the goods -- manual-transmission models were EPA rated at 52 mpg in mixed driving, and 60 mpg or more was quite feasible in highway driving.

As a used hybrid, a first-generation Honda Insight could make sense for a buyer keen on the car's high fuel economy and distinctive look and willing to put up with the car's faults. Based on our own experience and anecdotal evidence, reliability for first-generation Insights should be similar to that of other Honda products. Since the Insight didn't change much over the years, shoppers can likely pay more attention to actual condition or mileage than model year.