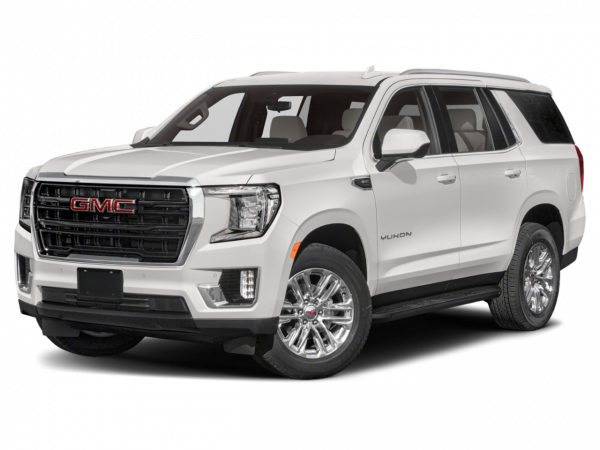 Buyers' tastes in large SUVs have changed over the years, and the GMC Yukon has changed with them. Introduced in the early '90s, the full-size Yukon sport-utility has gone from being a two-door 4x4 with a maximum passenger capacity of six to a four-door SUV with a choice of two- or four-wheel drive and seating for up to nine. Early Yukons were fairly basic on the inside, but later models offer numerous amenities, particularly the leather-lined Yukon Denali model. Road manners have improved greatly over the years, as it became apparent to GMC that Yukon buyers spend most of their time on pavement.

Some things haven't changed, though. The Yukon has always been a spacious vehicle that balances comfortable passenger accommodations with rugged utility atop a truck platform. Because of this strong body-on-frame construction, it's imbued with a stout foundation that allows it to securely tow heavy loads. A succession of strong V8s has resulted in not only those impressive tow ratings, but also ample acceleration in just about any situation. Now more refined than ever before, the GMC Yukon is one of the better full-size SUVs on the market for families who require a roomy, powerful vehicle that doesn't skimp on utility.

Current GMC Yukon
The GMC Yukon is a full-size SUV that rides on a stiff, fully boxed frame. It's been fully redesigned for 2015 and boasts attractive new styling inside and out. Other major updates for this fourth-generation model include increased engine output with slightly improved fuel economy, the addition of a large, multifunction touchscreen, added safety and technology features and a fold-flat third-row seat. Depending on the configuration, the Yukon will accommodate anywhere from six to nine passengers and tow up to 8,500 pounds.

Under the hood of the SLE and SLT is a 5.3-liter, 355-horsepower V8. The Denali packs even more power, as it features a 6.2-liter V8 with 420 hp. All Yukons come with a six-speed automatic transmission that sends power to the rear wheels on 2WD models or all four wheels on 4WD models. Should you opt for the latter, a two-speed transfer case with low-range gearing is optional on the lower trims and standard on the Denali.

In reviews, we've been impressed by the Yukon's combination of luxury, utility and comfort, especially given its humble pickup-truck underpinnings. The ride is smooth and quiet, while handling is reasonably secure for a 5,500-pound vehicle. Inside there's a newfound upscale, modern design featuring high-quality materials. However, although we're glad the Yukon now has an integrated, fold-flat third-row seat, it consumes cargo capacity and increases loading height. As such, a Toyota Sequoia or big crossover like GMC's Acadia is better for carrying passengers and cargo. But if you need the Yukon's outsized towing and hauling capabilities, it's one of the best of its breed.

Used GMC Yukon Models
The third-generation Yukon debuted for 2007 and was produced through 2014. Compared to previous Yukons that were little more than rebadged Chevy Tahoes, this generation further differentiated itself from its Chevy cousin via more distinct styling and some brand-specific equipment. For those who wanted even more "bling" than the Yukon offered, there was always the Cadillac Escalade. Improvements in drivability, interior design, materials and build quality were hallmarks of this much-improved generation.

Trim levels originally consisted of the base but well-equipped SLE, luxurious SLT and truly sumptuous Denali. Both the SLE and SLT were split into SLE1/SLE2 and SLT1/SLT2 variants for a few years, though by 2010 they returned to the simpler three trim designations.

Initially, there was a trio of engines from which to choose. A 4.8-liter 290-hp V8 (2WD SLE) and a 5.3-liter 320-hp V8 (4WD SLE & SLT) both mated with four-speed transmissions, and the AWD-only Yukon Denali came with a 6.2-liter 380-hp V8 mated to a six-speed automatic transmission. In 2008, the Denali became available with 2WD. Two years later, the 4.8-liter V8 was retired, the six-speed became standard across the lineup and the Denali's output had climbed to 403 hp.

Notable changes took place for 2009, when a third-row seat became standard across the board and Bluetooth phone connectivity became available, as did a rearview camera system that didn't require the optional navigation system. That year also saw full-length curtain head airbags become standard, a six-speed automatic for the 5.3-liter V8 and the debut of the one-year-only XFE package that boosted fuel economy by a single mpg via aerodynamic enhancements and lightweight aluminum components. The following year the 4.8-liter V8 was dropped, all Yukons were fitted with standard front-seat side airbags and a USB port debuted for the audio systems.

Overall, we found this generation of the GMC Yukon desirable for shoppers wanting a full-size V8-powered SUV with ample towing capacity. However, car-based crossover SUVs became much more popular during this period, and they're worth consideration given the advantages in space efficiency, fuel economy, handling and ride quality. Our main criticism involved the Yukon's manually removable third-row seats. At over 50 pounds each, they're heavy and cumbersome to remove, and they must then be stowed somewhere outside the truck. Furthermore, those third-row seats are also a favorite of smash-and-grab thieves.

The second-generation GMC Yukon was sold from 2000-'06. For the Yukon Denali, it's 2001-'06, as the 2000 model year was a carryover of the previous design. This generation of the Yukon was notable for its potent V8s, cushy interior accommodations, and pleasant ride and handling dynamics. It was, in fact, one of our favorite full-size SUVs and earned an Editors' Most Wanted distinction on multiple occasions. Weak points included numb steering, low-grade interior materials and inconsistent build quality. Front-seat side airbags were available throughout this generation, while stability control was available from 2003 on up.

The first-generation GMC Yukon debuted in 1992 as a replacement for the full-size GMC Jimmy, which had been on sale since 1970. Two-door Yukons were sold from '92-'97 with four-wheel drive only. The four-door Yukon arrived to stay in 1995 and offered a choice of 2WD or 4WD; the original Denali was available in '99 and 2000 with 4WD only. If you're considering a first-gen Yukon purchase, 1996-'99 models are your best bet. The standard 5.7-liter V8 was heavily revised in '96, and the result was significantly more horsepower and torque. First-gen Denalis also had this engine. Yukons of this era were comfortable and reasonably powerful, but not especially refined. Weak brakes and cheap interior materials were the major downsides.