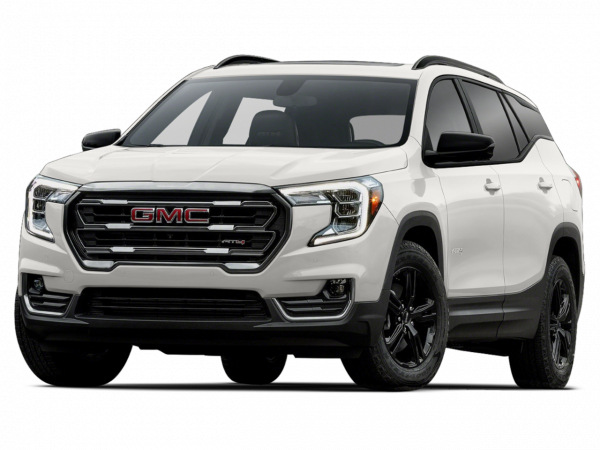 For decades, GMC was all about trucks and burly SUVs. But the more recent popularity of car-based crossovers has brought about evolution for the brand, as the GMC Terrain certainly indicates. A small crossover, the Terrain stands out thanks to its stylish cabin, versatile backseat, ample standard features and sophisticated driving manners. Along with its mechanically identical sibling, the Chevrolet Equinox, the Terrain is a smart choice for a new or used crossover.

Current GMC Terrain
The GMC Terrain compact crossover offers a choice of four- or six-cylinder power. The standard 2.4-liter four-cylinder is rated at 182 horsepower and 172 pound-feet of torque and comes with a six-speed automatic, while the optional 3.6-liter V6 makes a stout 301 hp and 272 lb-ft, also routed through a six-speed auto. Front-wheel drive is standard, and all-wheel drive is optional across the lineup.

The GMC Terrain boasts a nice ride and handling combination, feeling like a more substantial vehicle than its many rivals. Inside, the Terrain's cabin is impressively quiet, well built and earns top style marks. Fuel economy would seem to be a Terrain strong suit with the four-cylinder engine, given its EPA ratings. But in real-world testing we've found it to be merely average.

Features content is generous, as even the base SLE trim level includes a tilt-and-telescoping steering wheel, sliding and reclining rear seats, a rearview camera, OnStar emergency communications, satellite radio, Bluetooth phone and audio connectivity, and a touchscreen interface. With the latter two items, you can connect to Internet-based features like Pandora and Stitcher radio through a system GMC dubs Intellilink. High-end features such as leather upholstery, automatic climate control, a lane-departure warning system, a navigation system and premium audio are available as you move up through the SLT and Denali trim levels.

As a family hauler, the Terrain shines. Backseat accommodations are extraordinarily generous by default, and downright limousine-like when you slide that rear seat back. One minor disappointment is the Terrain's 64-cubic-foot maximum cargo capacity, which trails the class leaders despite this crossover's considerable dimensions.

Used GMC Terrain Models
The current-generation GMC Terrain debuted for the 2010 model year and has seen just a few notable changes since. For 2010-'13, the Terrain's power came from a 3.0-liter V6 that was less powerful than the current 3.6-liter engine; it produced 264 hp and 222 lb-ft of torque. A newly standard and updated touchscreen interface arrived for 2012 (previously a touchscreen only came with the optional navigation system), while later that year the Intellilink smartphone integration system debuted. The Denali trim debuted for 2013.