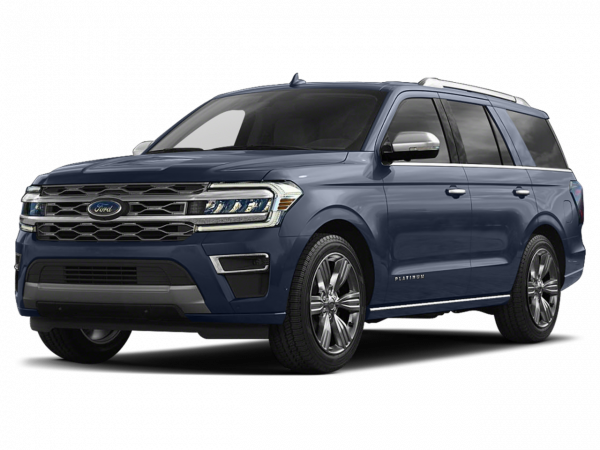 The Ford Expedition is a full-size sport-utility vehicle based on Ford's popular full-size pickup truck platform. With rear- or four-wheel drive and seating for as many as nine adults, the Expedition has long been on the short list of vehicle choices for full-size families as well as anyone who needs the combination of versatility and grunt provided by a large SUV.

Big, tall and heavy, the Ford Expedition is every inch a truck, its large body wrapped around a comfortable and spacious cabin. The latest generation of the Expedition doesn't feel as cumbersome to drive as its extravagant dimensions and hefty weight suggest, but you'll still be reminded of just how full-size the Expedition is at the gas pump. In many cases, a large crossover SUV would be a better new or used vehicle choice given the advantages in fuel economy, handling and comfort. And if you really need something big and tow-worthy, other traditional SUVs like the Chevy Suburban are also worth a look.

Current Ford Expedition
The current Ford Expedition is offered in two lengths -- standard and EL -- and three trim levels: XLT, Limited and King Ranch. The EL has a 12-inch longer wheelbase and nearly 15 inches of additional overall length. The biggest reasons to consider the EL are the massive cargo space behind the third-row seat (more than twice that of the standard Expedition) and the longer rear doors that ease entry into the third row.

All Expeditions are powered by a 5.4-liter V8 that produces 310 horsepower and 365 pound-feet of torque, mated to a six-speed automatic transmission. As with most full-size SUVs, the Expedition is offered with a choice of rear-wheel drive or four-wheel drive.

The Ford Expedition features fold-flat second-row seats as well as available power-folding third-row seatbacks that together create a wide, flat cargo floor. Families with infants will appreciate the sliding center position of the second-row seat, which can bring a child in a safety seat up to 11 inches closer to the front-seat passengers.

In reviews we've found Ford's full-size SUV pleasant to drive for a big SUV thanks to precise steering and a comfortable ride quality. In most situations, the 5.4-liter V8 provides decent performance. Take on a full load of passengers and cargo or hitch up a large trailer, however, and the engine's weakness becomes all too apparent. Shoppers who expect to regularly fill the cabin with passengers and/or tow heavy loads might want to consider the Ford's few rivals, which offer more available power.

Used Ford Expedition Models
The current, third-generation Ford Expedition is the product of a major refresh conducted for 2007. However, whereas previous-generation Expeditions could hold up to nine passengers, the current generation holds only eight, due to standard front bucket seats. Changes have been minimal; the most notable occurred for 2009 when the Expedition got Ford's Sync multimedia voice control system, and the following year, when trailer sway control was added.

The second-generation Ford Expedition was introduced for the 2003 model year. Compared to the current generation, the styling was different and a less stiff chassis resided underneath. Ride and handling were not as good, and the standard automatic transmission had only four gears. There were also fewer available features, including three-row side curtain airbags. However, compared to its predecessor, this Expedition was a vast improvement -- specifically in regards to driving dynamics, thanks to its independent rear suspension. It was also the first SUV to offer power fold-into-the-floor rear seats, a feature that its General Motors rivals wouldn't receive for more than a decade.

Engines for this second-generation model consisted of a 232-hp 4.6-liter V8 and a 260-hp 5.4-liter V8. For 2005, Ford dropped the smaller engine and increased the 5.4-liter V8's output to 300 hp. The model line eventually proliferated from four trim levels at its debut (including an off-road version called FX4) to six for 2006, including the opulent, western-themed King Ranch edition. Safety-minded shoppers should know that all years of this generation came with stability control, with tire-pressure monitors becoming available with the 2004 models.

In reviews, we thought this Expedition competed favorably with its contemporary competitors from General Motors, Nissan and Toyota. If there was one area of contention -- especially in pre-'05 models -- it was a lack of muscle. On the whole, though, this edition of Ford's big SUV provided solid handling for a vehicle of its size. It still felt like a big SUV, but the steering was decently weighted and body roll was well controlled around turns. The ride could be a tad harsh on rough roads, but overall, it was a comfortable cruiser.

Launched for the 1997 model year, the original Ford Expedition was met with heaps of praise. Its dimensions fell between those of the short-wheelbase and long-wheelbase versions of the GM sport-utilities at the time, enabling it to both accommodate a third-row seat and fit inside a normal garage, albeit tightly. With a front bench seat, it could carry up to nine passengers.

The first-generation Ford Expedition came in just two trim levels: XLT and the more luxurious, two-tone Eddie Bauer. Both featured interior architecture that was nearly identical to the F-Series pickup, which offered good ergonomics but was rendered in lamentable materials. Its 215-hp 4.6-liter and 230-hp 5.4-liter V8 engines also could not keep up with the stronger motors from its primary competitors, a deficiency that was addressed in 1999 with a horsepower bump for both engines, of 25 and 30, respectively.