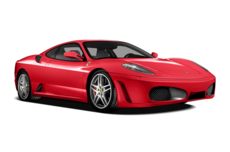 There's always been much more to Ferraris than just phenomenal performance -- their styling, exclusivity and sheer presence all play a part in their allure. Since the 1970s, Ferrari's line of midengine V8-powered sports cars has provided the most "affordable" means of accessing this mystique, though some of these cars have been more successful than others. While most offered a level of performance that few cars could match, more recent years have ushered in new competition, which effectively addressed the Ferrari's weaknesses while improving upon its strengths. The famous sports-car maker from Maranello answered with the Ferrari F430 coupe and Spider convertible.

The car's basic shape was similar to its 360 Modena predecessor, but was edgier and adopted design cues from its Enzo supercar contemporary. Thanks to a lightweight space frame draped with aluminum body panels, the F430 weighed in at a lean 3,200 pounds. The heart of the F430's improvements, though, was found in its drivetrain. For all to see underneath a clear rear hatch was a redesigned 90-degree V8, accompanied by a newer version of the "F1" sequential-shift manual transmission. It shifted more smoothly in everyday driving situations while still allowing super-quick upshifts and perfect rev-matched downshifts at the pull of a paddle.

Given that the F430's price easily broke the $200,000 barrier, it was understandably difficult for many people to consider this Ferrari as an "entry-level" machine. Even for the well-heeled, the F430's cost may have seemed a little excessive considering that similar-era cars like the Corvette Z06 or the Porsche 911 Turbo offered similar (or better) performance for considerably less money. But there's no denying that the Ferrari F430 was an exceptional sports car by every measure. In terms of performance, it had but a handful of equals and even fewer superiors. It won't be mistaken for anything but a Ferrari, and will no doubt bring thoroughly satisfying ownership to the fortunate few able to afford one.

Used Ferrari F430 Models
The Ferrari F430 debuted for 2005 as a coupe or Spider convertible. Production lasted through 2009.

The Ferrari F430 derived its power from a midmounted 4.3-liter V8 engine. Its 483 horsepower and 343 pound-feet of torque was sent to the rear wheels through either a traditional six-speed manual or Ferrari's electrohydraulic F1-style transmission controlled by paddle shifters. The F430 also had an electronically controlled "E-diff" rear differential that helped to improve acceleration and vehicle balance. At full gallop, the F430 hit 60 mph in less than 4.5 seconds and topped out just shy of 200 mph. Reining all this in were antilock brakes and driver-adjustable traction and stability controls.

A higher-performing variant called the 430 Scuderia was also offered for 2008 and 2009. Numerous track-ready parts like carbon-fiber body panels and interior elements were added, while many other items deemed non-essential were eliminated. The Scuderia weighed a significant 450 pounds less than the normal F430 and power was increased to 503 hp.

In contrast to older Ferrari models, the F430's cockpit was relatively comfortable for drivers of all kinds. The Spider's top was fully automatic, and could be lowered in about 20 seconds. Its rear window was made of plastic, however, which detracted slightly from the car's premium status.

Regardless, the F430 is a true exotic offering maximum driving thrills. Rocketing up to cruising speed is a gut-wrenching affair, and the V8's substantial power creates a shrieking wail that might be considered offensive or melodic, depending on context. Passing slower traffic is absurdly easy, and its superbly engineered steering and suspension connects the driver to the road in a manner few other cars of its time can match.