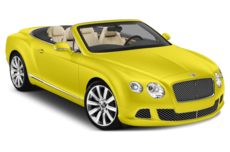 Some might find it hard to believe that Bentley actually competed in the 24 Hours of Le Mans endurance race a few years ago -- and won. But with the help of its parent company, Volkswagen, Bentley has recently done a remarkable job in shedding its stuffy image and establishing itself as a contemporary luxury coachbuilder.

In that fashion, the Bentley Continental GTC is more than just a posh convertible. It's a high-performance drop top that manages to provide every bit of luxury you'd expect in a traditional Bentley, only now with more attitude and agility.

As its name suggests, the GTC is the convertible version of Bentley's successful four-seat Continental GT coupe. Like the coupe, the GTC has a powerful turbocharged W12 engine, all-wheel drive and an adjustable air suspension. To make up for lost body stiffness due to the lack of a fixed roof, Bentley has fitted the GTC with additional structural reinforcements. Curb weight is a couple hundred pounds more than the coupe.

It's true that a couple of other high-end convertibles are a bit more agile in terms of handling. But for those financially fortunate souls just wanting a luxury-focused grand touring four-seater, it doesn't get any better than Bentley's new GTC.

Current Bentley Continental GTC
The Bentley Continental GTC is a two-door luxury convertible with seating for four. There's also the GTC Speed, a higher-performance variant. Both versions of this luxury convertible are powered by a twin-turbocharged 6.0-liter W12 engine attached to a six-speed automatic transmission. All-wheel drive is standard. The base GTC produces 552 horsepower and 479 pound-feet of torque, which takes the GTC from zero to 60 in 5 seconds.

The GTC Speed features 600 hp and 553 lb-ft of torque, and gets from zero to 60 in 4.6 seconds. In addition to the bigger engine, the Speed version gets bigger wheels, bigger brakes, a retuned suspension and consequently improved handling dynamics. Despite these performance upgrades, the GTC Speed retains every drop of civility normally associated with Bentley's vehicles.

Inside, the Bentley Continental GTC is packed with features and amenities and is fitted with the finest wood and leather. The options are virtually limitless (though you'll pay handsomely for them). Buyers can choose between different colors for the convertible top and styles of wood trim. There are a variety of lambswool rug choices, 17 colors for the interior and 15 for the exterior. The 80-11 Edition package of options debuts for the 2011 model year. This grouping is limited to only 80 examples and adds exclusive cosmetic enhancements that include 20-inch wheels, a dark gray metallic soft top, a Mulliner alloy fuel cap, a three-spoke steering wheel, alloy pedals, package-specific interior trim materials and minor exterior and interior badging.

With the push of a button, the convertible fabric top opens or closes in about 25 seconds and will even operate while the car is moving (at speeds up to 20 mph). Thanks to a modified version of the coupe's rear suspension, the top folds completely flat and maintains a sleek profile. If the rear seats are unoccupied -- they are surprisingly spacious -- a chrome and aluminum wind blocker can be raised over them to greatly reduce wind turbulence.

In road tests, our editors found the Continental GTC to be a tremendously dynamic drive, while remaining buttoned-down throughout. Acceleration is thrilling. Body roll can be eliminated with the firmest suspension setting, allowing this 5,500-pound luxury car to handle like a much smaller car. This goes double for the GTC Speed, which ups the performance ante considerably while still being a posh luxury cruiser. With the top down, expect noise to pick up considerably above 50 mph. Raising the windows buys you more quiet, and as long as there aren't surrounding cars filling the cabin with road noise, you can enjoy civilized conversation up to 80 mph.

Showing 1 through 10 of 11.00
Bentley Continental GTC Reviews By Year: