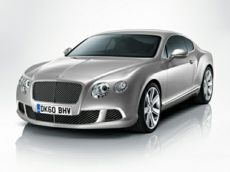 Abundance. Wretched excess. More than adequate. If any of these phrases gives you a warm, fuzzy feeling, then you'll probably fall in love with the Bentley Continental GT. And we mean this in the best possible way. For those with deep enough pockets, this is one indulgence we wholeheartedly endorse.

The Bentley Continental GT luxury coupe owes its name and heritage to the glory days of Bentley, when cars such as the R Type Continental coupe of the early '50s offered the wealthy a fast, stylish and comfortable way to traverse Europe or North America. Sadly, the next three decades saw Bentley become nothing more than a clone of Rolls-Royce (which had purchased Bentley in the early 1930s).

Sometime in the 1980s, the company decided it wanted a distinct identity and returned to its performance roots with cars such as the Turbo R. After being bought out by Volkswagen in the late 1990s and benefiting from that company's vast resources, Bentley began turning out ever more irresistible luxury sedans, coupes and convertibles.

The first of these models was, in fact, the Bentley Continental GT. Though some of its components are shared with other VW products, the Continental GT boasts a number of key attributes for well-heeled car enthusiasts, including blistering performance courtesy of a twin-turbo 12-cylinder engine, the all-weather confidence of all-wheel drive, a sumptuous cabin that typifies the marque and, of course, the prestige factor. And at far less than $200,000, we dare say it even strikes us as a good value for those with warm fuzzies in their hearts.

Current Bentley Continental GT
The current Bentley Continental represents the second-generation model, which debuted in the 2011 model year. This new model is not a major departure from the previous GT, amounting to more of a light refresh. Bodywork has been sharpened slightly, with a more upright grille, LED running lights and a more prominent trunk bustle. Improvements were also made in regards to handling, power output, rear-seat comfort and the previously outdated infotainment interface.

With twin-turbocharged W12 power, the finest materials furnishing the cabin and a powerful, bulldog-like presence, the Bentley Continental GT and higher-performance GT Speed and near track-ready Supersports have few peers. Combining effortless performance with an interior that is the epitome of the coachbuilder's art, the Continental GT is a prime example of a grand touring-oriented exotic luxury coupe.

The Continental's standard engine is a 6.0-liter, twin-turbo W12 that pumps out 567 horsepower and 516 pound-feet of torque and sends its power to all four wheels via a six-speed automatic transmission. With a 0-60 time of just 4.4 seconds and a top speed of 198 mph, the Continental GT is a supercar in every sense. The Continental GT Speed gets the twin-turbo W12 boosted up to 600 and torque is upped to a whopping 553 lb-ft. The GT Speed was the most powerful automobile Bentley ever produced until the introduction of the Continental Supersports, which is covered in a separate review.

Should a potential buyer wish to further set his Continental GT apart from all the others littering Rodeo Drive, he may choose custom colors and interior trim not offered in the Bentley catalog.

The Continental's standard engine produced 552 hp and 479 lb-ft of torque and the six-speed automatic transmission was slightly slower to shift than the current model, but performance was still comparable. A more powerful Continental GT Speed arrived for the 2008 model year with power output increased to 600 hp 553 lb-ft of torque.

Showing 1 through 10 of 58.00
Bentley Continental GT Reviews By Year: