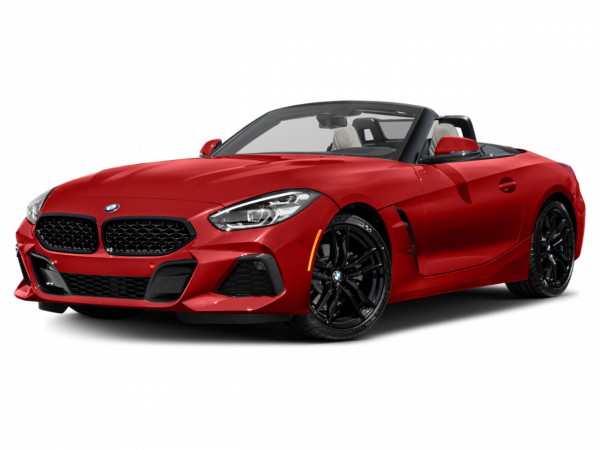 The BMW Z4 is one of the more intriguing sports cars available. It's the successor to the original Z3 and is presently the company's only two-seat sports car. Defining traits include a front-engine/rear-drive layout, a hunkered-down stance, a long hood and rearward positioning of driver and passenger. While the first Z4 featured a traditional soft top, the current Z4 model has a sleek retractable hardtop that makes this fun-loving roadster a more viable all-weather option.

The current Z4 also represents a slight change in philosophy for BMW's roadster. Not only does it sacrifice ultimate handling for greater ride comfort and overall refinement, but it also employs a highly fuel-efficient turbocharged four-cylinder as its base engine. The result is one of the most well-rounded sports cars money can buy. You'll need a lot of it, though, as the latest Z4 certainly doesn't come cheap.

Current BMW Z4
The current Z4 is offered with rear-wheel drive in three trim levels: sDrive28i, sDrive35i and sDrive35is. The 28i gets a turbocharged 2.0-liter inline-4 that produces 240 horsepower and 260 pound-feet of torque. A six-speed manual transmission is standard, with an eight-speed automatic available as an option. The 35i comes with a twin-turbocharged 3.0-liter inline-6 good for 300 hp and 300 lb-ft of torque; its sole transmission is a seven-speed dual-clutch automated manual (DCT). The 35is utilizes DCT and a revised version of the regular 35i's engine, boasting 335 hp and 332 lb-ft of torque with a temporary overboost function that pumps torque up to 369 lb-ft.

Though the primary distinction between these trims involves what's under the hood, there are some other equipment differences. The sDrive28i comes standard with 17-inch wheels, adaptive xenon headlights, keyless ignition and entry, dual-zone automatic climate control, eight-way power seats, Bluetooth and adjustable driving settings that change the programming for the steering, throttle and (if specified) automatic transmission. The sDrive35i adds 18-inch wheels, sun-reflective leather upholstery and sport seats. The sDrive 35is is similar but comes standard with an upgraded audio system and the performance-themed M Sport package (optional on other Z4s). Option highlights include heated seats and steering wheel, front and rear parking sensors and a navigation system.

In reviews, we've found the latest BMW Z4 to be an impressive and highly refined sport touring car, with a surprisingly roomy interior and decent trunk space as long as the retractable roof is raised. Although the turbo-4 makes less power than the old inline-6, it's got more torque, and fuel economy is substantially improved. Besides its rather agricultural grumble at idle, this is a sweet little engine. Should you want for more, the ultra-smooth and seriously quick six-cylinder models are bound to please.

The Z4 is generally a hoot to drive, especially if you go for the optional M Sport package and leave the adjustable drive settings in Sport mode. However, its reflexes and communication with the driver are a bit lacking due to a numb electric power steering system, a fairly hefty curb weight and a predilection for understeer. Still, we think most buyers will appreciate the Z4's firm yet compliant ride and accomplished all-around performance. A spirited top-down journey in a Z4 is a wonderful way to spend a sunny day.

Used BMW Z4 Models
The current, second-generation BMW Z4 was completely redesigned for 2009, as the previous coupe and roadster models were melded into one with the introduction of a retractable hardtop. The styling was revamped to be more curvaceous and fluid than the avant-garde first generation, while the interior gained some space, style and improved materials.

If you're looking at used second-generation Z4s, there are a few notable changes to keep in mind. From 2009-'11, the base Z4 was known as the sDrive30i, and it featured a carryover 3.0-liter inline-6 that produced 255 hp and 220 lb-ft of torque. The transmission was a six-speed manual or an optional six-speed automatic. This is a superb engine on its own merits, but it's not as fuel-efficient as the subsequent turbo-4, which replaced it for 2012 when the base model became known as the sDrive28i. The eight-speed automatic was introduced at the same time, supplanting the six-speed unit. As for the sDrive35is, it debuted for 2011 along with the M Sport package for lesser models. Finally, the sDrive35i could be had with a six-speed manual of its own until 2015.

The first-generation BMW Z4 was introduced for 2003 with controversial "flame-surfaced" styling. Originally, there were two roadster models available, identified as 2.5i or 3.0i. The 2.5i had a 2.5-liter inline-6 that made 184 hp, while the 3.0i used a 3.0-liter inline-6 that generated 225 hp. For transmissions, there was a five-speed manual (standard on the 2.5), a six-speed manual (standard on the 3.0), a five-speed automatic or a six-speed sequential manual gearbox (SMG). Standard equipment included 16-inch wheels (17s for the 3.0i), a manually operated soft top (with rear glass) and leather upholstery for the 3.0i. Major options included a power top, xenon headlights and a navigation system.

A significant update occurred for 2006, including the debut of the fixed-roof Z4 Coupe and revamped trim levels with new engines -- the 3.0i (215-hp inline-6) and 3.0si (255-hp inline-6). The Z4 Coupe was offered in 3.0si trim only. A six-speed manual transmission was standard on every Z4, while a six-speed automatic was optional. The largely disliked SMG transmission was dropped. Other changes included a retuned standard suspension for better ride quality, a revised final-drive ratio for improved acceleration and updated styling. High-performance M versions of the Z4 were also offered and are reviewed separately here.

Although we prefer the updated 2006-'08 models, every first-generation BMW Z4 rewarded drivers with an engaging driving experience. In reviews, our editors praised the car's sharp reflexes and quick acceleration, though the ride could be a bit rough -- particularly prior to '06 -- and the steering wasn't as communicative as some competitors. The Coupe possessed a slight advantage in terms of handling due to its added body rigidity.