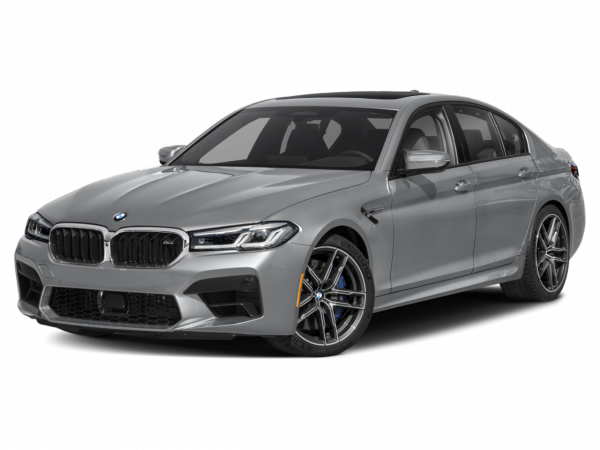 There are sport sedans, and then there's the BMW M5. No other car in recent memory has been able to represent the ideal for this segment as strongly as the Bimmer. For each of its five generations, the M5 has impressively blended sports car performance, sedan utility and luxury ambience.

The M5 is a product of BMW's performance-tuning M Division. It's based on the 5 Series sedan, and historical calling cards include a unique and more powerful engine, a sport-tuned suspension, more powerful brakes, special wheels and tires, and aerodynamically enhanced bodywork. Though the most recent BMW M5 is the fleetest of the group, any M5 still represents a fantastic choice for a luxury sport sedan. Even M5s from the 1980s and '90s were significant performers in their day, and the rare well-kept specimen still holds great appeal for enthusiasts.

Current BMW M5
The current M5 packs a twin-turbo 4.4-liter V8 good for 560 horsepower and 502 pound-feet of torque. The optional Competition package bumps the power up to 575. Rear-wheel drive and a seven-speed dual-clutch automated manual are standard, while a six-speed conventional manual is available as a no-cost option. Unlike the rev-happy naturally aspirated engines that came before it, this turbocharged mill provides a mountain of low-end torque that seemingly never lets up. This is an astonishingly quick car.

How the M5 drives is largely determined by which of the myriad drive settings you choose. Steering weight, suspension firmness, throttle response, transmission shift programming and stability control parameters can all be adjusted to your exact preferences. On an ordinary BMW, the adjustable settings consist of three or four preset combinations, so this M5 represents a new level of customizable performance.

The overall result is a car that can function equally well as a docile commuter or a vicious, corner-attacking machine. There are several other cars that pull off a similar double-duty trick, but the M5 is the car that arguably inspired them all. Its engine may be a departure from past models, and its size may make it seem a bit unwieldy at times, but there's no denying that the latest M5 maintains its high-performance street cred.

Used BMW M5 Models
The current, fifth-generation M5 debuted for 2013 after a two-year hiatus for the nameplate. Like the 5 Series on which it's based, this M5 is larger than its predecessor, with an improved interior and more traditional BMW styling. In addition to swapping out the old V10 for a twin-turbo V8, it gains a superior dual-clutch automated manual transmission, a more capable torque-vectoring rear differential, upgraded brakes and enhanced adjustable drive settings. Unlike the regular 5 Series, the M5 sticks with more responsive and communicative hydraulic power steering rather than electric.

The previous, fourth-generation BMW M5 was produced for the 2006-'10 model years. It was powered by a screaming 5.0-liter V10 capable of 500 hp and 383 lb-ft of torque. The only transmission at first was a single-clutch automated manual called SMG that sent power to the rear wheels. Drivers could either leave the transmission in automatic mode or perform exceptionally quick gearshifts via steering-wheel-mounted paddles. The downside was unrefined, herky-jerky upshifts, which were particularly unwelcome in ordinary driving. BMW offered an optional six-speed conventional manual starting in 2007.

The fourth-gen M5's suspension took more of a back-to-basics approach. Unlike the standard-issue 5 Series of that era, the M5 lacked active roll bars and run-flat tires. The major pieces were electronically controlled dampers, lightweight 19-inch wheels, performance tires and massive brakes. Our quibbles here mostly concerned the unnatural-feeling steering system with its variable ratio and effort. Otherwise, this M5 was a track-ready ninja with uncommonly precise handling.

Like previous M5s, the fourth generation didn't sacrifice much comfort to achieve its high-performance abilities -- just about every luxury feature came standard. Whether it's utilized for daily commuting, impressing clients or blasts on empty canyon roads, a used M5 from this generation will be up to the task. Be wary of maintenance costs, however, as BMW forums are rife with tales of eye-wateringly expensive repair bills.

Besides the addition of the six-speed manual, there were only subtle changes made throughout the fourth-generation M5's life. Most notably, model years prior to 2010 featured older versions of iDrive that made even the simplest stereo or climate control functions complicated to use. Extensive changes for 2010 made it far more user-friendly.

For some die-hard BMW enthusiasts, the third-generation M5 is still the best. Offered from 2000-'03, this M5 featured a 4.9-liter V8 good for 394 hp. At the time of the car's debut, the engine's output was considered quite outrageous for a midsize luxury sedan, as was its 0-60 time of 4.8 seconds. The sole transmission choice was a six-speed manual. Eighteen-inch wheels and the requisite suspension and braking upgrades were part of the package, though some say it never quite equaled the raw athleticism of the previous M5. Numerous new technology features found their way into this generation, including an electronic "drive-by-wire" throttle with adjustable response and an early navigation system. It will no doubt be a future classic.

Prior to this there were two M5 generations, and both are rare sights on U.S. roads today. The second-generation M5 was available from 1991-'93. It had a straight-6 engine that displaced 3.6 liters and made 310 hp, a then-remarkable output that actually trailed the European-spec engine by 30 hp. This M5 was prominently featured in the 1998 Robert De Niro car chase classic Ronin. At the time, the only sedan capable of matching the M5 was the Mercedes-Benz 500E, which had a V8 engine.

The original BMW M5 was available for the 1988 model year only and was based on the second-generation 535i. For power, it had a version of the 3.5-liter straight six-cylinder found in the legendary M1 exotic sports car. In the United States, it made 256 hp and 243 lb-ft of torque. The sole transmission was a five-speed manual, and the cars were offered with a black paint job only. Highly collectible now, it's said that only 500 were brought to the United States.