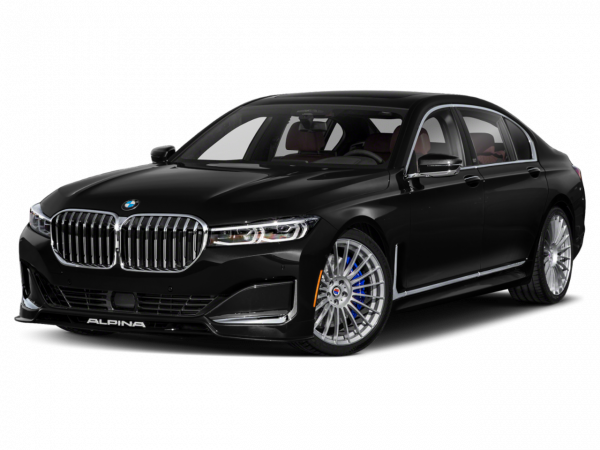 Most BMW sedans get a thorough "M" treatment from the company's iconic Motorsport division, but the full-size BMW 7 Series is the exception. There has never been an M7, as the engineers have always felt that the 7 Series just doesn't fit the mold. Instead, BMW asked Alpina, a German aftermarket tuner, to whip the 7 Series into shape. The result, known as the BMW Alpina B7, is essentially a 7 series with big wheels, better brakes, firmer suspension settings and -- oh yeah -- a wickedly powerful engine.

There have been two generations of the limited-production Alpina B7. The first, based on the previous-generation 7 Series, featured a supercharged V8, while today's B7 is based on the current 7 Series with its twin-turbo V8. These cars aren't as uncompromising as an M7 would be, but that makes sense given the 7 Series' refined character. Rather, the B7 adds civilized helpings of speed and style to what is already a very accomplished luxury sedan.

Current BMW Alpina B7
The current Alpina B7 is offered in standard-wheelbase 750i or long-wheelbase 750Li trim, with BMW's "xDrive" all-wheel drive optional on both. Power comes from a twin-turbocharged 4.4-liter V8 that's been massaged to produce 540 horsepower and 538 pound-feet of torque. Running through an eight-speed automatic transmission, this powerhouse vaults the B7 to 60 mph in 4.3 seconds, according to BMW.

During our seat time in the current BMW Alpina B7, we've quickly warmed to its split personality. On long highway drives, the B7 is as comfortable and refined as any 7 Series, insulating passengers from the outside world and delivering them relaxed and refreshed at their destination. But when the mood strikes on a curvy back road, the B7's phenomenal V8 thrust and sharp chassis provide one of the greatest thrill rides possible in a large luxury sedan. Judged purely on performance, the Alpina isn't quite the top dog in this class, but buyers should also factor in the exclusivity guaranteed by its minuscule production numbers. If you've got the bankroll, the B7 is bound to make you smile.

Used BMW Alpina B7 Models
The current, second-generation Alpina B7 debuted for the 2011 model year. Unlike its rear-drive, short-wheelbase predecessor, it could be had in either long- or short-wheelbase form with rear- or all-wheel drive. The transmission was initially a six-speed automatic, while the twin-turbo V8 was rated at 500 hp and 516 lb-ft of torque -- same as the previous supercharged V8. The eight-speed automatic and current output levels were introduced for 2013, as were modest styling tweaks, a few additional options and the latest iDrive interface.

The first-generation BMW Alpina B7 was produced for the 2007-'08 model years. It was based on the short-wheelbase version of the fourth-generation 7 Series. Standard features included 21-inch wheels, upgraded brakes, a body kit with integrated rear spoiler, steering-wheel-mounted shift buttons, an early version of iDrive and a few aesthetic upgrades in the cabin. Other standard equipment was identical with that on the ultra-luxurious 760Li, which means it had just about every feature in BMW's bag of tricks.

Under the hood, a radial supercharger -- the first of its kind in any production car -- bumped the output of BMW's 4.4-liter V8 to 500 hp and 516 lb-ft of torque, a huge increase from the stock 325 hp and 330 lb-ft. The sole available transmission was a six-speed automatic that sent power to the rear wheels. Although the B7 wasn't the swiftest car in its segment (a distinction that belonged to the mind-numbingly rapid Mercedes-Benz S65 AMG), its estimated 0-60 mph sprint of 5.0 seconds still put it in very special company, as did its top speed of 186 mph. Our editors were also impressed with Alpina's suspension tweaks, which helped the original B7 feel responsive and composed in virtually every situation.

Used first-generation BMW Alpina B7s are few and far between. Interested parties should keep in mind that there were no changes made during its short life.