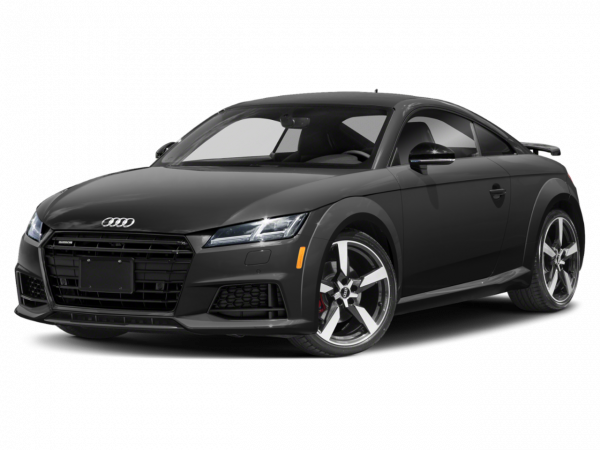 At its debut as a concept car in 1995 and finally a production reality five years later, the Audi TT was one of the most dramatic cars to debut for the new millennium. Its organic and symmetrically styled front and rear profiles contrasted with slab-sided flanks to create a look unlike anything Audi had ever done before. Meanwhile, the TT's handsomely executed and in many ways ground-breaking interior left no discernible traces of the car's rather humble VW Golf roots.

Named after the Tourist Trophy race held on the Isle of Man (in which a predecessor of the Audi brand competed), the Audi TT is not quite a sports car, not quite a sport coupe or roadster. In essence, the front- or all-wheel-drive TT is a two-seat grand tourer. True, the coupe has a pair of seats in the back, but they are best left for little kids or used as an upholstered package shelf. For those seeking more thrills in the same package, there are the sporty TTS and TT RS variants.

Current Audi TT
The Audi TT is available as a 2+2 hatchback coupe or a two-seat roadster convertible. Only one trim and engine are available, the latter being a 2.0-liter turbocharged four-cylinder that produces 211 horsepower and 258 pound-feet of torque. Quattro all-wheel drive and a six-speed dual-clutch automated manual transmission (S tronic) are standard.

Handling is commendable, but hardly anything that'll remind you of a Porsche Boxster or Cayman. The TT is ultimately more about its unique style, a comfortable ride and its all-wheel-drive system that provides the sort of all-weather traction that few small coupes offer. The turbocharged four-cylinder delivers respectable power, while the quick-shifting transmission helps make the most of that output. Still, 211 hp isn't much in this segment, where 300-plus hp is more typical. As such, for driving enthusiasts the TT's acceleration will seem subpar.

One of the TT's most notable assets is its superbly crafted interior, which boasts a sleek and modern look. Standard features include xenon headlights, leather/simulated suede upholstery, Bluetooth connectivity and a 12-speaker Bose audio system with satellite radio. Options include the S Line Competition package (19-inch wheels, sport suspension, upgraded leather upholstery), heated seats, a navigation system and nifty baseball glove-style upholstery. Though the coupe's rear seats aren't suitable for anyone taller than 5 feet, they fold down to create a substantial 23 cubic feet of cargo space. The convertible has 8.8 cubic feet, which is sizable for a roadster.

Used Audi TT Models
The current Audi TT was redesigned for the 2008 model year and represents the second generation. The general look is a clear evolution of its predecessor, though character lines are crisper and the nose adopts Audi's now signature single-frame grille. Although longer and wider than the first TT, the latest version is lighter (by nearly 200 pounds in the case of the roadster) thanks to increased use of aluminum in the body structure. It also offers a more powerful four-cylinder engine.

Prior to 2010, the TT could be equipped with different powertrain options, specified as the TT 2.0T (200 hp and 207 lb-ft of torque up until 2011) and TT 3.2. The TT 3.2 featured a 250-hp V6. This was a lively engine and certainly offered more grunt than the turbo-4, but its added weight was a detriment to handling. Both engines came standard with a six-speed manual, while the S tronic transmission was optional. Quattro was always standard on the TT 3.2. Initially, the TT 2.0T was front-wheel drive only, then Audi offered Quattro as an option for 2009 before making it standard for 2010. Used car shoppers should also be aware that cars from early in this generation were available with a rather antiquated form of iPod connectivity (it would only play your first six playlists as if CDs in a six-disc changer) in lieu of the later standard auxiliary jack and optional iPod interface.

Introduced for the 2000 model year and initially available solely as a hatchback coupe, the first TT was powered by Audi's peppy 1.8-liter, 180-hp turbocharged inline-4. Buyers could choose either front- or all-wheel drive (Audi's Quattro system). A five-speed manual was standard, while a six-speed manual was optional. Along with its low-slung, avant-garde styling, the TT boasted an equally unique interior that featured polished aluminum accents, impeccable fit and finish and, unfortunately, a few ergonomic glitches such as a CD changer mounted behind the driver seat and counterintuitive climate controls.

After a highly publicized recall to fix the twitchy handling characteristics of early TTs, a roadster and a 225-hp Quattro version debuted the following year. In 2003, an automatic transmission (with six speeds) became available. But the biggest news for this generation came in 2004, when the 250-hp 3.2-liter V6 and Audi's superb six-speed automanual gearbox became available. The latter, dubbed DSG, provided rapid yet jolt-free manual-style gearchanges that put a Ferrari's F1 transmission to shame. The Audi TT stood pat through 2006, the last year of this generation.

Potential buyers should know that, although potentially fast in a straight line, this TT was never considered a true sports car due to its potentially heavy curb weight and softly sprung suspension. Still, the TT should satisfy those who prize comfort, style and all-weather capability in their sport coupe or roadster.