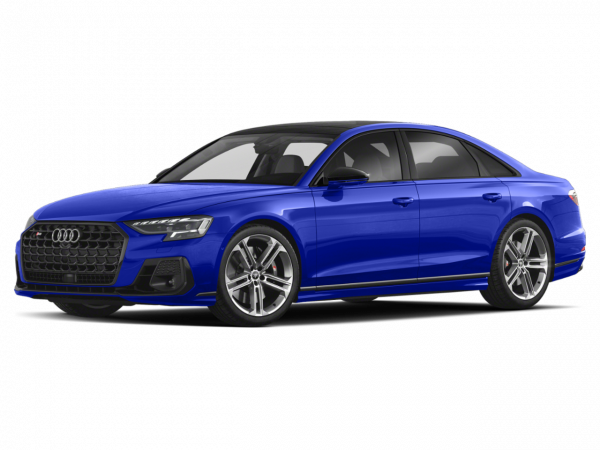 The Audi S8 is this German automaker's flagship performance sedan that has been sold sporadically. Debuting at the start of the new millennium, it was the third Audi for the North American market to bear an "S" badge. Showcasing Audi's performance engineering, S- and RS-badged vehicles compete directly against performance models from divisions like BMW's M and Mercedes-Benz's AMG.

Building on the A8's lightweight aluminum space frame chassis, the S8 adds a more powerful engine, a sport-tuned suspension, more powerful brakes and a slightly more aggressive look. Despite being Audi's largest, most luxurious sedan, its combination of a relatively light curb weight, muscular power and the tenacious grip of the car's standard Quattro all-wheel-drive system makes it surprisingly quick and agile. The latter, which obviously optimizes motive traction, is a boon for those who have to drive in inclement weather conditions.

Current Audi S8
Sporting a twin-turbocharged V8 cranking out 520 horsepower, this large flagship sedan can sprint to 60 mph in a claimed 3.9 seconds. Yet considering its size and blindingly quick performance, the S8's fuel economy is pretty good at 19 mpg combined.

Naturally, stunning acceleration is but one facet of this diamond. Road manners are polished thanks to an adjustable, sport-tuned air suspension. As such, the S8 changes direction confidently when pressed on a curvy road, yet delivers a comfortable ride while swallowing up large chunks of interstate. Also helping matters here is the S8's weight of about 4,600 pounds, relatively light in this segment considering the Audi's size, wealth of luxury features and standard all-wheel drive.

Traditionally an Audi strong point, the cabin of the A8 boasts tasteful styling and top-notch fit and finish. A few highlights of this plush sanctuary include dual-pane side windows that, along with active noise-cancelling technology, ensure serenity, while heated, cooled and massaging front seats make long trips a joy. Should you wish to break the silence, there's an available Bang & Olufsen audio system with 1,400 watts of enveloping sonic clarity.

Our few minor gripes are that the trunk capacity is somewhat meager and that there is no longer-wheelbase version available. The S8's rear legroom will certainly be more than adequate for most folks, but it nevertheless isn't as overtly spacious as the Audi's competitors or the A8L. That said, the Audi S8 should pretty much check any box you could envision for a high-performance, full-size luxury sedan.

Used Audi S8 Models
After being absent from the lineup for three years, the Audi S8 returned for 2013, ushering in the third generation of the luxury sport sedan. Apart from minor equipment shuffling, this version is identical to the current offering.

Produced from 2007-'09 after a three-year hiatus, the second-generation Audi S8's most talked-about feature was its engine. Audi's engineers took advantage of parent company Volkswagen's ownership of Lamborghini and snagged the Lamborghini Gallardo's 40-valve V10 engine. Audi increased displacement to 5.2 liters and added direct injection to optimize power delivery. The result was 450 hp and 398 pound-feet of torque. All that sonorous power went through a six-speed Tiptronic automatic transmission with steering wheel paddle shifters. Audi claimed it could sprint to 60 mph in just 5 seconds flat.

This S8 delivered the performance goods while rewarding the driver with an opulent experience filled with techno-gadgetry. It had a user-friendly Multi Media Interface, Bluetooth connectivity, navigation, a powerful Bose audio system with a glovebox CD changer and power-retractable side mirrors. All of it was wrapped in sumptuous leather and wood trim. A stiffer version of the standard A8's fully independent adaptive air suspension worked with 20-inch wheels, performance tires and speed-dependent steering to deliver exceptional handling in both high- and low-speed maneuvers.

Overall, the combination of luxury, performance and technology added up to an impressive package. At the same time, Audi kept the styling upgrades tasteful so the S8 didn't immediately scream "performance model" like some competitors. Only in terms of maximum performance potential is Audi's finest a bit of a letdown.

When it debuted for the 2001 model year, the first-generation S8 came with a 4.2-liter V8 making 360 hp and 317 lb-ft of torque. The aluminum frame body and lowered, stiffer suspension performed well on its 18-inch wheels. The fit and finish bested anything else in its class. It even garnered a starring role in a memorable car chase in the film Ronin directed by John Frankenheimer. Yet the S8 never seemed to have the name cachet of its impressive rivals.

Audi continued to improve the car by small increments until it was discontinued for 2004. It offered new features like a tire-pressure monitoring system, front and rear parking assist and a navigation system. To increase the feeling of exclusivity, Audi released limited-edition color combinations like a silver exterior with a burgundy interior, a Ming Blue exterior with a platinum interior and a black exterior with a caramel interior. As a used model, the original S8 still provides serious performance dynamics that can be enjoyed from the most splendid of environments.