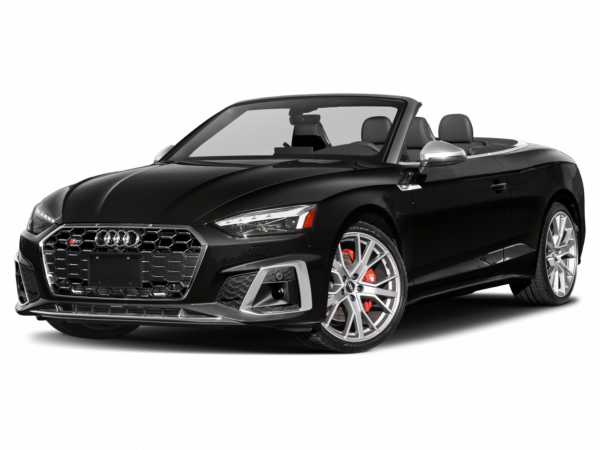 True to brand nomenclature, the Audi S5 is the performance version of the A5 coupe and convertible. That means bigger engines, more horses and a stiffer suspension. The S5's exterior is set apart from its more mild-mannered sibling by a chrome-trimmed grille, quad tailpipes and more muscular bumpers. The resulting package is refined yet athletic, with luxury appointments that ensure comfort matched with a powertrain that won't disappoint.

The S5 is still in its first generation, but there have been significant changes through the years for new and used car shoppers to consider. The most notable of these occurred under the hood, as the coupe originally had a big, snarling V8 that arguably makes the car a future classic. The supercharged V6 that's always been in the cabriolet and in today's coupe is a commendable engine that produces ample power and improved fuel economy, but lacks a certain degree of the V8's character (not to mention 21 horses). Either way, though, it doesn't take away from the S5's status as one of the most appealing luxury coupes.

Current Audi S5
The Audi S5 is available as a coupe and convertible (cabriolet). Both are similarly equipped and feature all-wheel drive. Power comes from a 3.0-liter supercharged V6 good for 333 horsepower and 325 pound-feet of torque. The coupe comes with a six-speed manual transmission, while the Cabriolet receives a seven-speed automated manual transmission that's optional on the coupe.

The Audi S5 is largely based on the four-door S4, but with curvaceous lines inspired by Audi's Nuvolari concept vehicle that made the auto show rounds in 2003. In part to maintain that voluptuous figure, the cabriolet features a sleek soft top rather than a heavier retractable-hardtop design.

Both coupe and convertibles are offered in Premium Plus and Prestige trim levels. Standard feature highlights of the Premium Plus include xenon headlights, the Audi Drive Select system (adjustable settings for the steering and transmission), leather and simulated suede upholstery, tri-zone automatic climate control, Bluetooth and a 10-speaker sound system. The Prestige additions include adaptive headlights, a blind-spot warning system, mobile WiFi, a navigation system and a Bang & Olufsen premium sound system. Options include adaptive cruise control, ventilated front seats and a neck-level heating system on the cabriolet.

Inside the cabin, the four-seat Audi S5 is appointed with sophisticated touches, such as finely stitched leather and genuine aluminum trim. The front sport seats offer plenty of space and support, although legroom could be better in the backseat. Audi's MMI (Multi Media Interface) controls the audio, climate and optional navigation systems, and is relatively easy to figure out. Although the S5 has the spirit of a sports car, it's still practical enough for everyday life. Both body styles offer about 12 cubic feet of trunk space, and their rear seats flip down to make even more room. When flipped up, though, the backseat is definitely on the cramped side for adults.

In our tests, we found the Audi S5 to be an excellent grand tourer. The supercharged V6 provides robust and thrilling performance. The steering feels crisp and the suspension, although non-adjustable, is about ideal as it is firm without being gut-busting. Brakes may seem a little touchy at first, but with acclimation they prove responsive and firm. Thanks to Quattro, the S5 provides excellent traction in all conditions, making it an ideal all-year choice for performance-minded buyers living where the weather occasionally turns foul. Power is normally distributed 40 percent to the front and 60 percent to the rear, giving the S5 handling characteristics similar to those of a rear-wheel-drive car.

Used Audi S5 Models
The Audi S5 debuted for the 2008 model year as a coupe only, powered by a 4.2-liter 354-hp V8. It was a superb engine and used car shoppers should consider opting for an older model to get it. The S5 cabriolet arrived for 2010, but rather than the V8, it had the then-new 3.0-liter 333-hp supercharged V6. Transmission choices for the coupe included a six-speed manual and a six-speed automatic, whereas the cabriolet came solely with a seven-speed dual-clutch automated manual. That year also saw upgrades to the MMI electronics interface and optional navigation system.

For 2013 the V8 was dropped and the S5 received a slight styling update (with a more angular grille/headlights), a switch to electric-assisted steering, a revised MMI control interface and an available mobile WiFi feature. Apart from lacking Audi Drive Select and keyless entry and ignition as standard (they were optional though), these latter S5s are similar to today's version.