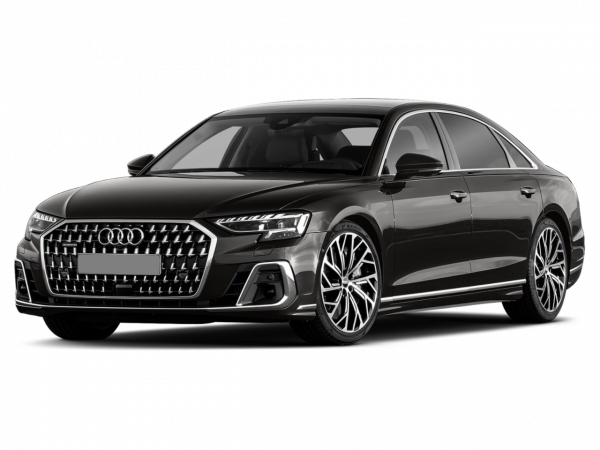 The flagship Audi A8 is a full-size luxury sedan meant to appeal to wealthy consumers looking for maximum luxury and space. Although competing models from the premium German and Japanese marques may sell in greater numbers, the A8 does possess a distinct advantage because of its aluminum frame and body panels. Significantly lighter than a traditional steel structure, the Audi Space Frame (ASF), as it's called, helps offset the weight of the car's Quattro all-wheel-drive system; the A8's competitors are primarily rear-wheel drive.

Thanks to Quattro, winter weather capability is one of the Audi A8's strengths. Luxurious accommodations are another, particularly with the last couple of generations. As with other Audis, understated luxury and cutting-edge electronics combine to form an experience that delivers refinement in abundance. Though it's sometimes overlooked, the A8 is a fine choice for a luxury flagship.

Current Audi A8
The Audi A8 is a full-size luxury sedan available in standard and long-wheelbase ("L") forms. Even with standard all-wheel drive (AWD), the A8 still weighs less than most of its rear-wheel-drive rivals, let alone those fitted with optional AWD. The A8's AWD system has a rear-biased power split, which helps to provide a sportier feel akin to a rear-drive performance sedan.

Of course the A8 comes loaded with all the latest high-tech features. Highlights include a dynamic steering system that can intervene with automatic countersteering in a slide, adaptive cruise control with stop-and-go capability, automatic emergency braking, and night vision with thermal imaging and pedestrian detection. Audi's MMI electronics interface features an additional touchpad interface that reads fingertip gestures as letters and commands. Google Earth mapping for the navigation system is another A8 exclusive.

Beyond the sumptuous cabin, which features front and rear seats that can be adjusted in a multitude of ways, there's also the big sedan's impressive ride and handling characteristics. The ride is comfortable without excessive float over bumps. When pressed on a curvy road, the A8 proves surprisingly agile, with nicely weighted steering. Rear seat room is ample in the regular-wheelbase model, while the A8 L provides more than enough legroom for a pair of 6-footers.

The A8 undoubtedly lacks the name recognition and styling flair of its fellow Germans, but don't let that stop you from giving it strong consideration. With its roomy, best-in-class cabin and excellent driving dynamics, this luxury sedan shines as one of the strongest picks in its segment.

Used Audi A8 Models
The current A8 represents the third generation in the model's history, debuting in 2011. In that inaugural year, the sole engine was a 4.2-liter V8 engine with 372 hp and 328 lb-ft of torque. The following year brought the 6.3-liter W12. For 2013, the 4.2-liter was dropped, while both the supercharged V6 and turbocharged V8 seen in the current lineup debuted. Apart from lacking the TDI engine option and some minor differences in standard and optional equipment, these latter A8s are otherwise essentially identical to today's version.

The previous, second-generation Audi A8 was sold from 2004-'10. Relative to its predecessor, this generation offered a lighter chassis and a more muscular V8, along with lots of comfort, safety and suspension upgrades. This A8 was offered in both standard-wheelbase (A8) and long-wheelbase (A8 L) versions. The base engine was a 4.2-liter V8 that generated 335 hp and later rose to 350 hp for 2007. A six-speed automatic transmission and all-wheel drive were standard. From 2005-'09, there was an A8 L W12 model that featured a 6.0-liter 12-cylinder engine that produced 450 hp.

Changes were light during this generation. There were slight styling alterations for '08, while the equipment list was bolstered nearly every model year. Regardless of which year you may be considering here, cabin furnishings were superb and the MMI interface made accessing the car's numerous audio, climate and navigation functions fairly easy. This A8 was often overlooked by luxury sedan shoppers, but we always found it to be a great alternative and certainly equal to other flagships in terms of luxury, performance and craftsmanship.

The first-generation Audi A8 was offered from 1997-2003. Although it was one of the most technologically advanced cars on the market by virtue of its aluminum frame, it never had its successor's flair for style or performance. Understated in its adornments inside and out, the original A8 failed to deliver the over-the-top ambience that's so important for high-dollar luxury sedans sold in the United States. However, if you like the idea of owning a discreet luxury car, you can buy a used A8 for considerably less than you'd pay for a used BMW 7 Series or Mercedes-Benz S-Class.

Early Audi A8s were offered only with a 113-inch wheelbase, which meant that their backseats were cramped compared to the other full-size luxury sedans. The longer and roomier A8 L arrived for the 2000 model year and would be our pick if you're planning to carry adults in back. Most first-generation A8s were sold with a 4.2-liter V8 and Quattro all-wheel drive. Thusly equipped, the A8 was one of the quickest large luxury sedans of its day, though the V8 was deficient in off-the-line torque. It was a comfortable car but not a particularly entertaining one due to overly soft suspension tuning. Audi also offered a less expensive front-wheel-drive model from 1997-'99. This rare A8 had a small 3.7-liter V8 and a modest 8.3-second 0-60 time.