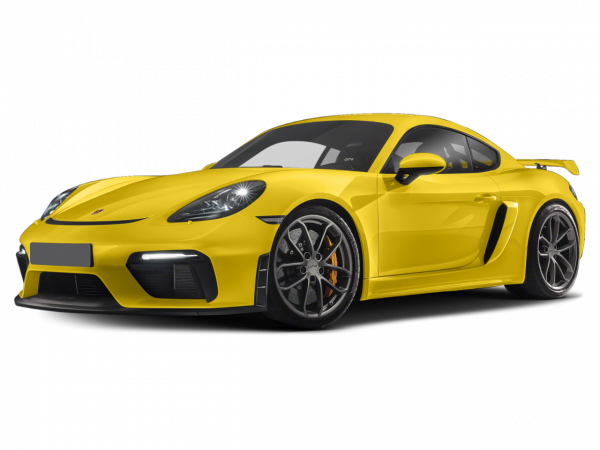 The two-seat Porsche Cayman sports car shares its midengine platform with the Boxster, but its stiffer structure makes it an even more precise driving tool. Offering ultra-responsive handling, competition-grade brakes and sonorous flat-6 engines that make every road your own personal racetrack, the Cayman is a delightful car to drive. Now that the 911 has moved up in size and luxury, the Cayman perhaps best exemplifies the Porsche tradition of high performance in a compact, lightweight package.

The Cayman can also be surprisingly affordable, at least by Porsche standards. The base Cayman undercuts the entry-level 911 Carrera by tens of thousands when new, and the higher-performance models are still relative bargains if you go easy on the options. Pre-owned specimens, meanwhile, can be real steals thanks to the magic of depreciation, yet they provide thoroughly up-to-date performance. Whether you opt for the current Cayman or its nicely aging predecessor, you'll be getting one of the very best pure sports cars for the money.

Current Porsche Cayman
The current, second-generation Cayman features crisper exterior styling and a considerably richer interior than the original, though its performance is only incrementally better; it's hard to improve on near-perfection. Electric-assist power steering debuts on this Cayman, sacrificing a bit of road feel, yet remaining one of the most gratifying tillers in the industry. The car is slightly longer and lower now, with a stretched wheelbase underneath and wider tracks front and rear. Laudably, Porsche claims a weight reduction of 55 pounds for the Cayman S.

There are three trim levels for the current Cayman: base, S and GTS. The base Cayman comes with a 2.7-liter horizontally opposed six-cylinder engine ("flat-6") that's good for 275 horsepower, crossing the auspicious 100 hp/L threshold. The Cayman S packs a 3.4-liter flat-6 rated at 325 hp, while the GTS's 3.4-liter flat-6 makes 340 hp. A six-speed manual transmission is standard across the lineup, with Porsche's seven-speed dual-clutch automated manual (known as PDK) offered as an option. All models are capable of 30 mpg or more on the highway.

A base Cayman with no options means you're stuck with a lame four-speaker stereo, but other standard features are more appealing, including 18-inch wheels with summer tires, an automatically extending rear spoiler and a 7-inch touchscreen. The Cayman S adds perks like bigger wheels, bi-xenon headlights, a nine-speaker stereo and enhanced infotainment functions. The GTS is distinguished by unique styling elements, a sportier interior, dynamic transmission mounts and some otherwise optional electronic driving aids. It goes without saying that the options list is long, colorful and full of eye-popping price tags.

In reviews of the current Cayman, we've run out of synonyms for "awesome." Handling basically doesn't get any better than this, particularly given how comfortable the Cayman can be on a daily basis. The textbook driving dynamics combined with Porsche's nearly infallible electronic driving aids will make you feel like a Formula One hero every time you take a corner. We also applaud Porsche for taking the interior to the next level, as the Cayman now feels like a premium sports car in its own right rather than a junior 911. Alas, the Cayman remains a junior 911 in the engine room -- keeping the 911 a few horses ahead is a matter of company policy -- but only the pathologically power-hungry will find the sublime 3.4-liter engine lacking, and the 2.7-liter mill is a thrill in its own right.

Used Porsche Cayman Models
The previous, first-generation Cayman was produced for the 2006-'12 model years (there was no Cayman for 2013). Like its successor, it was based on the Boxster of its era, substituting a fixed roof for the Boxster's soft top. For '06, only the Cayman S model was available, powered by a 3.4-liter flat-6 rated at 295 hp and paired with a six-speed manual transmission, or optionally a five-speed automatic with "Tiptronic" manual control. The base Cayman model launched for 2007, featuring a 2.7-liter six-cylinder with 245 hp and a five-speed manual transmission as standard, with the six-speed manual and five-speed automatic also offered.

The Cayman lineup was refreshed for 2009. There were exterior styling tweaks like attractive LED lighting accents, but the real changes were found under the skin. Most notably, the PDK transmission debuted, putting the aging Tiptronic out to pasture. The base Cayman upgraded to a 2.9-liter flat-6 with 265 hp, while the Cayman S added direct injection to its 3.4-liter engine for a healthy 320 hp.  The optional navigation system was modernized with a larger screen and more intuitive controls, and items like ventilated seats, a heated steering wheel, an iPod interface and satellite radio were offered for the first time.

For '09 only, all Caymans with PDK came with awkward shift buttons on the steering wheel that tended to get in the way during enthusiastic driving, but a sport steering wheel with proper shift paddles was made available for 2010 (and was backwards-compatible with 2009 PDK models). For the first generation's 2012 grand finale, two special-edition models with 330 hp were introduced: the Black Edition (with a blacked-out color scheme and added luxuries) and the Cayman R (with a lowered suspension, lightweight seats and limited feature availability).

Our reviews of the first-generation Cayman were almost uniformly positive, though in retrospect, the 2009-'12 batch is where it's at for clutch-averse shoppers; PDK is so much better than Tiptronic that it's not even worth discussing. If you don't mind doing your own clutch work, however, any year will do. This Cayman was built to a consistently high standard, and exhilarating performance came standard throughout its run. So if you're shopping first-generation Caymans, go where your price ceiling takes you and look for a well-maintained car with low miles. You're going to have a blast, and the price might make your grin even wider.