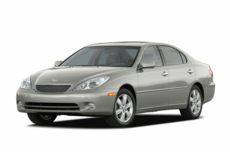 If the marketing term "entry-level luxury sedan," were something you could look up in a regular dictionary, you would undoubtedly be referred to an artist's rendering of the Lexus ES 330. Few cars throughout history have offered such a by-the-book interpretation of affordable luxury.

For Lexus, the near-luxury experience implies supreme comfort, capable performance and impressive fuel economy. And so like every ES sedan before it, the Lexus ES 330 was a softly suspended, front-wheel-drive sedan with a creamy V6 engine and an automatic transmission programmed to shift for smoothness and efficiency rather than maximum acceleration. Inside, the ES 330's midsize dimensions provided room for four adults to bask in leather seats cushioned to sectional sofa standards. Painstaking use of noise-dampening insulation ensured a serene highway ride for all.

Although it brought calm and relaxation to many a frazzled commuter, the Lexus ES 330 was not an entry-level luxury sedan for everybody. In its quest to deliver the most luxury possible, it sacrificed driver involvement and enjoyment. For anyone with enthusiast leanings, the un-sporty ES 330 was a dull drive.

It's no surprise, then, that Lexus made the ES 330's successor, the ES 350, quicker, more agile and a bit more engaging. For consumers who aren't worried about sport-sedan pretensions, though, the Lexus ES 330 is an excellent choice for a used car purchase, particularly when you consider its first-rate reputation for reliability.

Lexus also increased equipment levels in the ES 330 transition, as must-have items like leather upholstery and a moonroof became standard fare for the first time. On the safety side, larger side curtain airbags were fitted.

Chrome wheels were optional as well, though on '05 and '06 models they measured 17 inches in diameter. Ventilated front seats became optional in '05, and satellite radio joined the list for '06.

Like all ES sedans, the Lexus ES 330 was based on the Toyota Camry, so driving characteristics were similar, though Lexus buyers could look forward to an even plusher, even quieter ride. Zero-to-60-mph times were in the mid-7-second range on both cars. Those wanting firmer handling around corners had the option of ordering an adaptive suspension, which varied the shock absorber damping according to road conditions, vehicle speed and driver input.

Consumers shopping for a used Lexus ES 330 should feel free to select from any of the three model years, as substantive differences were minimal. Lexus did give the ES some cosmetic upgrades for the '05 model year: The front and rear fascias were revised and fitted with new lighting elements, while inside, buyers could opt for bird's eye maple wood-grain trim in lieu of walnut. In addition, prospective ES 330 buyers who want a factory-installed navigation system may want to focus on '05 and '06 models, as they had voice activation technology.