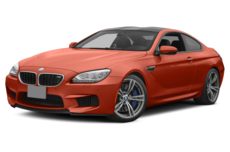 BMW is famous for building dynamic "driver's cars" that are designed to thrill. In particular, the company's M-badged high-performance variants rank among the most capable and rewarding cars in the world. It should come as no surprise, therefore, that the BMW M6 -- the company's flagship two-door performance car -- is something truly special.

Though not genuine sports cars, the two latest generations of the M6 can challenge the world's best on just about any road, thanks to their muscle-bound engines, powerful brakes and athletic suspensions. At the same time, they offer all the comfort and luxury one would expect from BMW's premier coupe and convertible. Their inspiration comes from the original M6 coupe of the late '80s; now a bona fide collector's car, it helped prepare the stage for BMW's modern M performance line.

Current BMW M6
The current M6 is powered by a twin-turbocharged 4.4-liter V8 rated at an astonishing 560 horsepower and 500 pound-feet of torque. A seven-speed dual-clutch automated manual with shift paddles is standard, but a conventional six-speed manual can be specified. During Edmunds testing, a convertible M6 sprinted to 60 mph in just 4.2 seconds; the lighter coupe is even quicker. This engine feels invincible on the road, thrusting the car forward with breathtaking force at virtually any speed.

Predictably, the M6 comes loaded with all the latest high-tech performance and comfort features. These include xenon headlights, front and rear parking sensors, a power tilt-and-telescoping steering wheel, a rearview camera, the iDrive electronics interface with navigation and a powerful audio system. Also included are driver-adjustable settings for the suspension, transmission, steering and engine. Option highlights include a head-up display and massaging front seats.

Like all BMW M models, the M6 is no mere straight-line superstar. The finely balanced chassis and precise, communicative steering make it a similar standout during enthusiastic cornering. However, the M6's hefty size and suboptimal outward visibility can make it feel a bit awkward on narrow, winding roads. There's still more handling capability here than any big coupe has a right to have, but the M6 is ultimately less of a sports car than a stunningly quick, endlessly comfortable grand touring machine. For some driving enthusiasts, that's a just-right combination.

Used BMW M6 Models
Following a two-year hiatus, the third-generation M6 debuted for the 2013 model year. Like the current 6 Series on which it's based, the latest M6 sports more traditional styling, roomier front-seat accommodations, a more useful trunk and torque-rich turbocharged performance. The new twin-turbo V8 provides a lot more shove off the line compared to the previous M6's high-revving V10, though it lacks the old motor's thrilling rush to redline. Initially, the dual-clutch automated manual was the only available transmission; the regular manual was introduced for 2014.

The previous, second-generation BMW M6 was produced from 2006-'10. The coupe was available throughout that run, while the convertible arrived for '07. Both versions employed a 5.0-liter V10 engine that produced 500 hp and 383 lb-ft of torque. A seven-speed sequential manual gearbox (SMG) was standard, while a traditional six-speed manual was available for all but the 2006 model year. Owners could choose from three different electronic drive programs, with the demonic "M" button unlocking the car's full potential.

This M6 took the low-slung style of the mainstream 6 Series coupe and convertible and added unique front and rear fascias. These not only contributed to a more sporting look, but also served to enhance aerodynamic efficiency. The exterior was further differentiated by unique trim, mirrors, wheels, colors and a quad-outlet exhaust.

Inside, the second-gen M6 displayed a handsome if staid design aesthetic. Buttons and switches were kept to a minimum thanks to BMW's iDrive electronics interface; however, aside from the vastly improved version introduced for 2010, we considered this iDrive iteration difficult to use and a serious drawback to an otherwise very appealing car. Passenger space was great for two people but quite cramped for four. Trunk space was average-plus for this segment, augmented by a pass-through panel to accommodate longer items.

Edmunds editors found the performance of this BMW M6 to be simply intoxicating. The sounds emanating from the V10 power plant were like nothing else available to consumers, unless you count the contemporaneous M5 -- and the M6 actually provided superior performance due to its slightly reduced curb weight and lower center of gravity. The M6 convertible only added to the aural pleasure. Repair bills for this generation are not for the faint of heart, but with the song of an F1-inspired V10 in your ear and 500 horses underfoot, life still doesn't get much better for an automotive enthusiast.

The first generation of the M6 turns back the clock to model years 1988-'89. Based on the 6 Series coupe of the time, the original M6 was powered by a free-revving, 3.5-liter inline-6 engine that produced 256 hp and 243 lb-ft of torque. Exceptionally rare today, this M6 is a fascinating time-warp back to the early days of BMW's Motorsport division. Its effective successor was the V12-powered 850 CSi coupe of the 1990s.