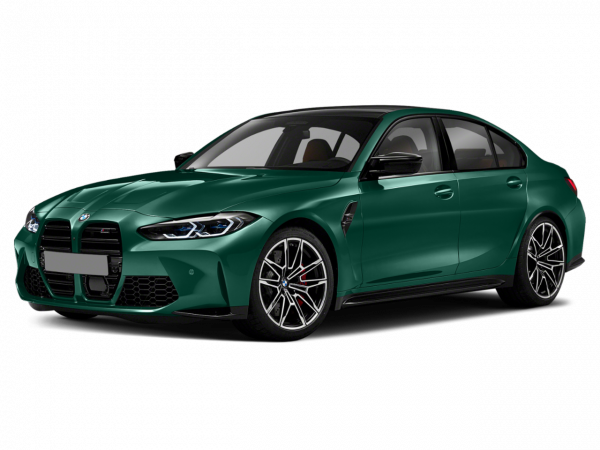 The BMW 3 Series has long been regarded as the benchmark compact sport coupe. Taking this already athletic vehicle to new heights is the M version, known as the BMW M3. In the Bimmer world, the letter M stands for the company's Motorsports performance division. These fun-loving engineers tweak a given BMW model's engine for more output, upgrade the suspension for even more agile handling and add sporty exterior and interior design elements.

Throughout its two decades on the U.S. market, the BMW M3 has been a favorite of enthusiasts looking for sports-car performance and handling from a true four-place car. Although content to smoothly burble around while doing daily driver duty, the M3 transforms into a back-road burner when conditions allow and gives its pilot the opportunity to attack corners with precision and rocket out of them with gusto.

Current BMW M3
Based on the present-generation 3 Series, the M3 is offered in only one trim level among the coupe and hardtop convertible body styles. Both are powered by a 4.0-liter V8, good for 414 horsepower and 295 pound-feet of torque, which revs to a thrilling 8,400-rpm redline. A six-speed manual is the standard means of sending power to the rear wheels, and a seven-speed automated-clutch manual gearbox with paddle shifters is optional. M3s also get specific hardware upgrades such as more powerful brakes, stiffer suspension tuning and a specialized limited-slip rear differential.

While past M3s have been performance stars, the M3 coupe is quite simply one of the best cars to grace our test track. It accelerated from zero to 60 mph in a blistering 4.6 seconds and came to a stop from 60 mph in an extremely short 100 feet. The slalom and skid pad test results were also on par with vastly more expensive supercars, while on-road handling is beyond reproach. Getting the less rigid convertible degrades these capabilities a little, but regardless of which body style you choose, expect one of the best performance machines money can buy.

Used BMW M3 Models
The present-generation BMW M3 was introduced for 2008 in coupe, convertible and sedan body styles. The latter, discontinued after 2011, was perfect for those who desired M3 performance but with a greater degree of practicality. Changes have been limited to feature additions, with first-year models featuring a less user-friendly iDrive system and slightly different sedan styling. The Competition package was added for 2011 for the coupe and sedan.

The previous M3 lasted from 2001-'06 and was available in coupe and convertible body styles. There was a single trim level for both, powered by a 3.2-liter six-cylinder engine producing 333 hp and 262 lb-ft of torque. A six-speed manual transmission was standard, while a six-speed sequential manual gearbox (SMG) was offered as an option starting for the 2002 model year. The latter allows manual-style shifting via paddle shifters next to the steering wheel, and although it was popular, we weren't fans of its herky-jerky performance.

Changes were minor during the lifespan of this generation of M3s. A CD player became standard for 2002, while the following year saw the addition of a few extra convenience features plus an improved DVD-based navigation system. (The former one was CD-based.) The only major addition arrived for 2005 with the Competition Package (coupe only), which provided some of the performance hardware from the European-market M3 CSL, such as 19-inch forged wheels, revised suspension tuning, a quicker steering ratio, upgraded brakes and a less intrusive Track mode for the stability control system.

Every road test of this M3 sang the car's praises in terms of its incredibly balanced handling, prodigious grip and telepathic communication between car and driver. The downsides of this no-compromises performance car are few: a stiff ride, tinny exhaust note, and more wind and road noise in the convertible than one might expect. For die-hard sports car enthusiasts who need four seats, it doesn't get much better than the BMW M3. However, these cars tend to be driven hard and owners frequently modify them, so it's important to examine a used example closely before signing on the dotted line.

The second-generation M3 was introduced in 1995 and was a tidy package, with only its subtle rocker panel extensions, tri-color "M" badges and different wheels to separate it from the common 3 Series. Along with a buttery-smooth 240-hp inline-6, this generation of the M3 wooed enthusiasts with its ripping performance, finely balanced chassis and everyday livability. For enthusiasts on a budget, this is perhaps the best deal for a used M3, combining a wide choice of body styles (coupe, convertible and sedan), along with plenty of entertaining performance and an affordable price tag. The coupe ran throughout this generation from 1995-'99, while the sedan (1997 and '98) and convertible (1998 and '99) were only available briefly and are consequently harder to find.

The first-generation BMW M3 was the most radical. Running from 1988-'91, this M3 was essentially a hard-edged, racetrack-ready version of a 3 Series sport coupe. These M3s featured aggressively blistered fenders fore and aft, slightly thicker C-pillars that allowed a more aggressively canted rear window, and a higher trunk lid fitted with a large spoiler. Under the extroverted bodywork was not an inline-6, but a highly-tuned DOHC 16-valve inline-4 that cranked out, for its time, a very impressive 195 hp without the help of a turbocharger or supercharger. An unmolested first-generation M3 is a rare find these days and tends to require more maintenance and care than the second-generation car because of its more specialized four-cylinder engine.